Prime Minister Scott Morrison has warned rapid antigen tests won’t be subsidised for everyone as coronavirus cases continue to rise and the country’s leaders finalise plans to make the screening tests available for free in vulnerable communities.

Doing the rounds of breakfast television on Monday, Mr Morrison said rapid antigen tests, which will replace PCR testing in most instances, would be free in certain circumstances, including for close contacts and symptomatic people. 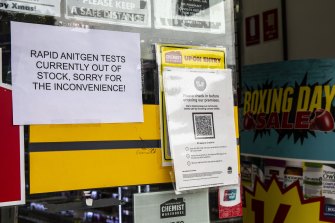 A sign on Chemist Warehouse Double Bay, Sydney, informs customers that they have no rapid antigen tests left. Credit:Jessica Hromas

The plan, agreed by national cabinet last week, will see the federal government split the cost of rapid antigen tests provided through testing facilities. However, earlier state plans to hand out free tests to the broader community were scrapped in the deal.

“We’ve invested hundreds of billions of dollars getting Australia through this crisis. But we’re now in a stage of the pandemic where you can’t just make everything free because when someone tells you they want to make something free, someone’s always going to pay for it and it’s going to be you,” Mr Morrison said on Sunrise.

So far on Monday, 34,600 COVID-19 cases have been confirmed in NSW, Victoria, Tasmania, the ACT and Queensland. Supplies of rapid antigen tests have been limited in areas with high numbers of COVID-19 cases as PCR testing queues and result wait times blow out, and people on social media have reported costs soaring well over $10 or $15 a test.

The nation’s Pharmacy Guild has opposed completely free access to rapid antigen tests while social services groups and unions have been pressuring the government to provide them at no charge to low-income families, and employer groups want them subsidised for workers.

“If they were an unconstrained flow of completely unpriced products, so as there was an infinite supply to an infinite number of people, then of course, that demand couldn’t be met,” he said.

“If there were no constraints on that, then people would go down and take crates and boxes away.”

Mr Hunt said state and federal governments had bought millions of test kits and there was also the capacity for individuals or businesses to purchase tests through the private market.

In November, national cabinet agreed to work on an Australian guideline for the use of rapid antigen tests, including as a screening tool in vulnerable populations such as Indigenous communities and in schools.

Mr Hunt said that plan was still being worked out and would be discussed at national cabinet again on Wednesday.

Opposition leader Anthony Albanese said the Prime Minister had failed to learn lessons from earlier in the pandemic and plan ahead with rapid antigen testing, and people should not be priced out of getting the tests.

“People who can’t afford them should be given them. That’s the truth of the matter. Because otherwise, the consequences are more dire,” he said on the Today show on Monday morning.

“The consequences of people not being able to be tested means that they will be out there in the community spreading the pandemic. And we need to do all that we can.

“We need to get the health outcomes right in order to minimise the economic impact. I don’t know how it is that those lessons haven’t been learnt. But this government, it’s always too little and too late.”