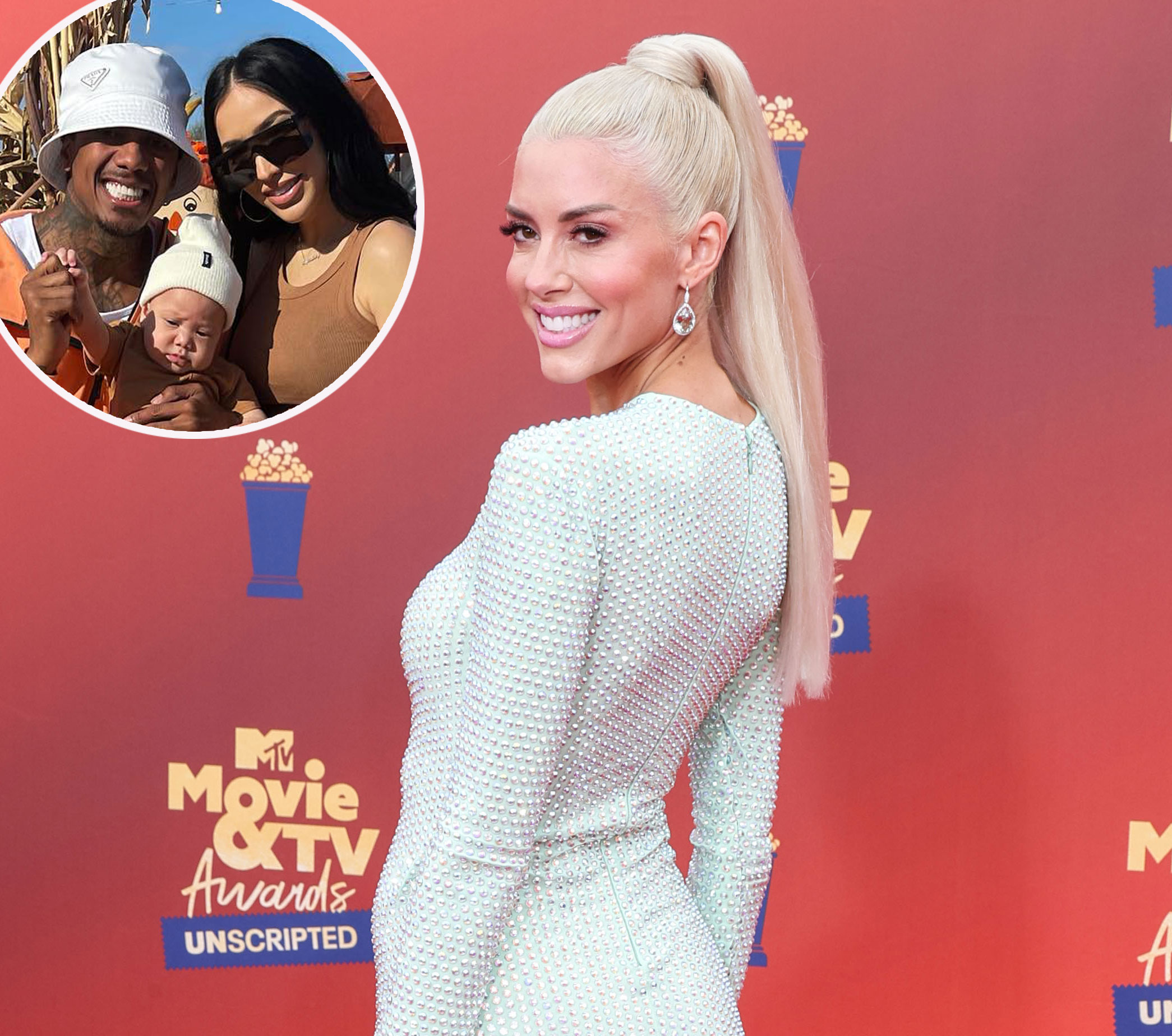 The Selling Sunset star was all smiles in the photo as she held onto her costar’s 6-month-old son, whom Tiesi, 31, shares with Nick Cannon.

“This is the baby,” El Moussa said in a video she shared the same day as she introduced Legendary to her dog. “He’s so fascinated with what’s going on. Looking at Tarek [El Moussa].” 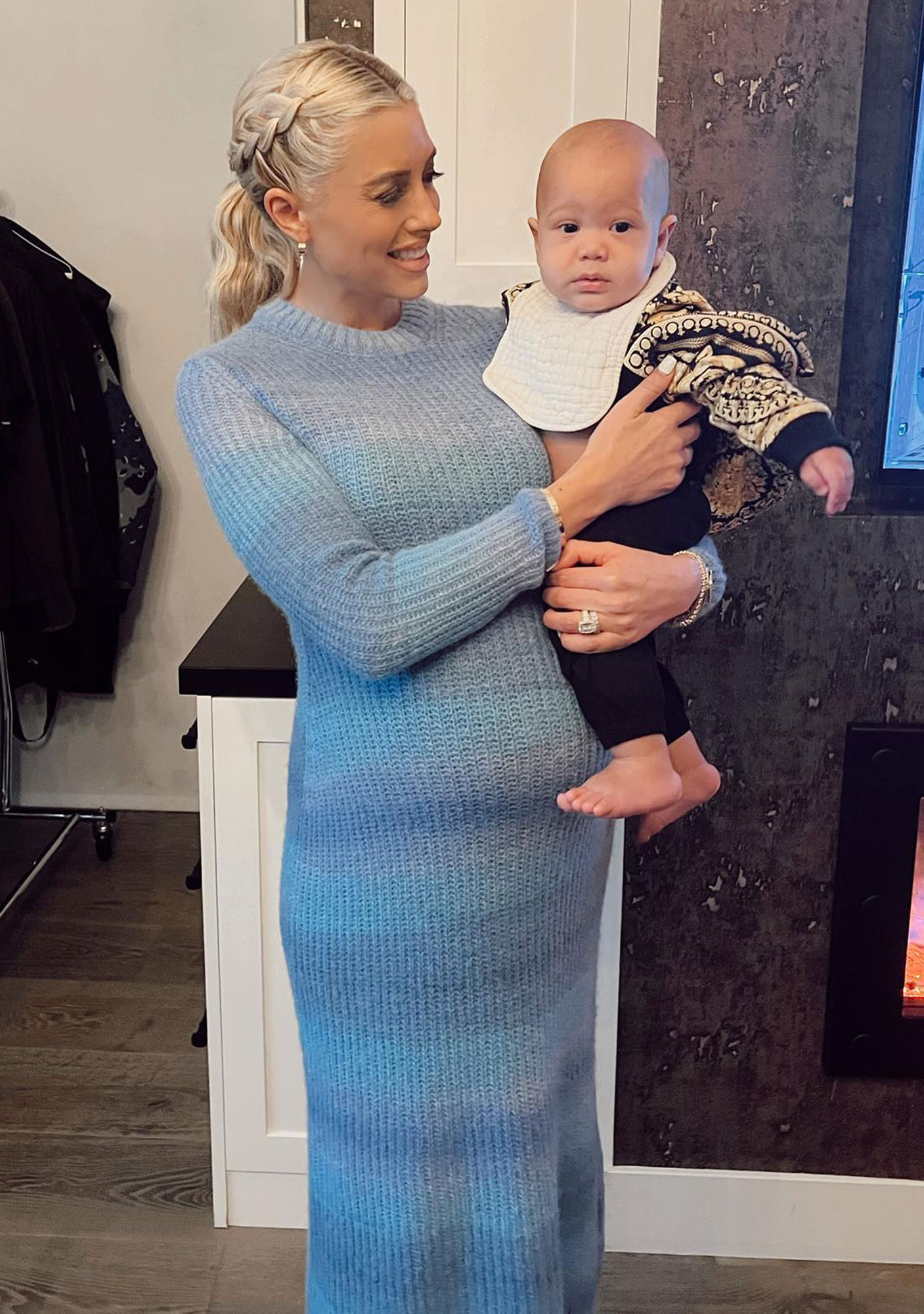 In the clip, Tiesi can be overheard talking to her son as well. “Aweeee he loves his auntie and can’t wait to meet his new Bestie 😍🥰,” she replied to Heather’s post.

Heather later posted a snap via her Instagram Story of her 41-year-old husband, Tarek, grinning from ear to ear as he carried the little tot. “Uncle Tarek in training!” the Anaheim, California, native wrote alongside the picture, revealing that Legendary was “obsessed with Tarek’s beard.”

The Flipping the El Moussas cohosts, who tied the knot in October 2021, announced in July 2022 that they are expecting their first child together. The Flip or Flop alum, for his part, is already father to daughter Taylor, 12, and son Brayden, 7, whom he shares with ex-wife Christina Hall (née Haack).

Ahead of their baby boy’s arrival, Heather has shared many of her milestones with fans. Last month, she exclusively told Us Weekly that she and Tarek had yet to “set” in stone their son’s name as she entered the home stretch of her pregnancy.

“We’re kind of throwing around ideas, but I think we want to wait until he’s born and see what he looks like,” she said while attending the 2022 People’s Choice Awards.

Days later, Heather revealed via her Instagram Story that she was put on bed rest after experiencing “unbearable” sciatica pain. 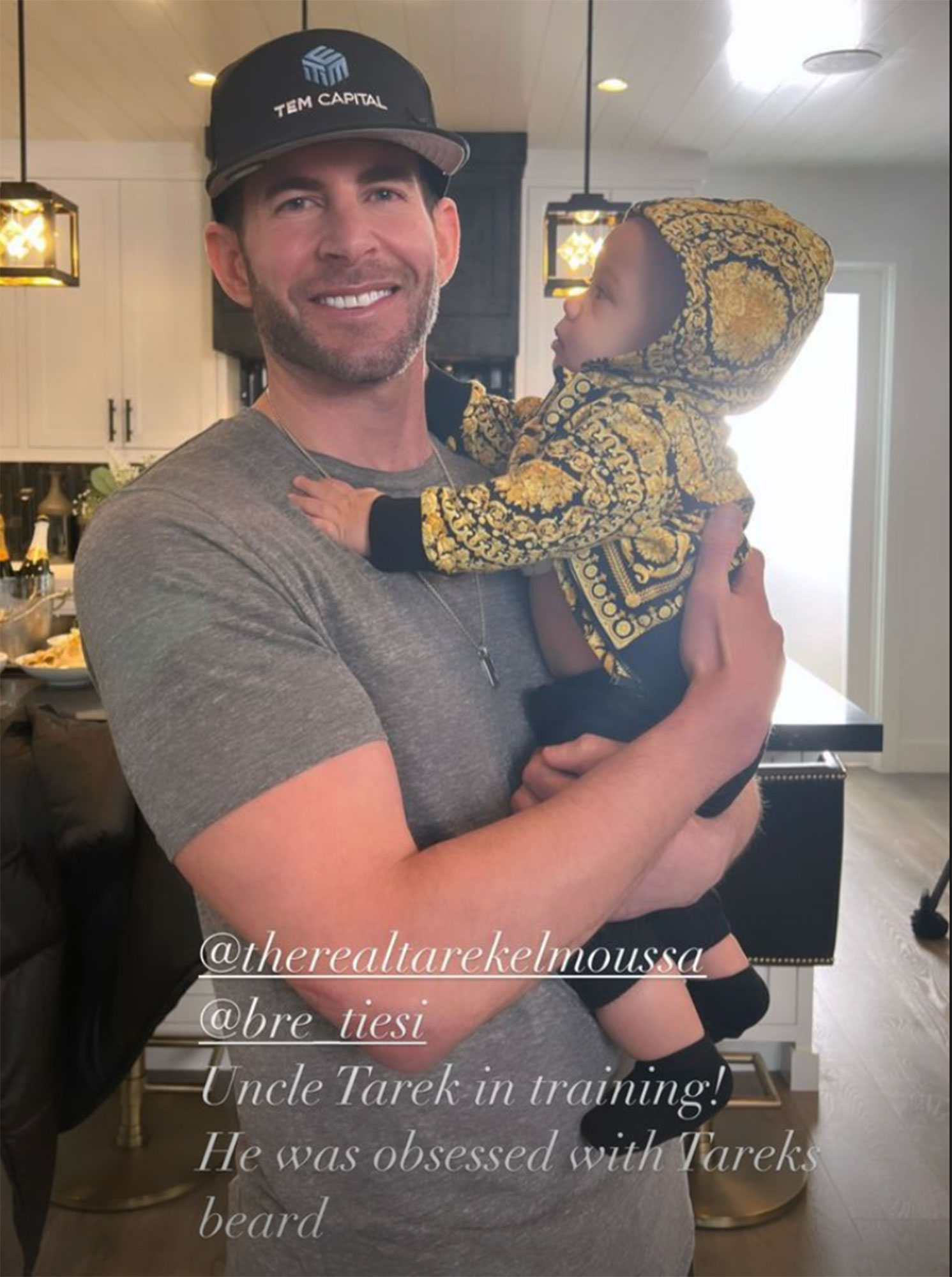 The pregnant TV personality’s condition has since improved and Heather announced via social media on Sunday, January 15, that she was able to start going on walks again. She explained that after she “rested as much as possible” and did both physical therapy and acupuncture the pain subsided.

Tiesi, for her part, revealed earlier this month that she “always wanted” to have kids after welcoming her baby boy in July 2022, but said that marriage isn’t in the cards for her at the moment.

“I’m far from a single mother. I have help and a support system. I truly applaud the women who do not have any help,” she explained via a January 9 Instagram Q&A. “Let’s also be real that 99% of women do it all and then add on taking care of their spouse.”

The Netflix personality insisted that she “never” wanted to get married despite tying the knot with Johnny Manziel in 2018. The pair called it quits in 2019 and finalized their divorce two years later. Tiesi later moved on with Cannon, 42.

“I only dreamed of traveling the world and being the top of my career, creating an empire, creating generational wealth and living life to the fullest with my kids or kids!” she added.

Cannon, for his part, has welcomed 12 children with several different women, including his and Tiesi’s son Legendary. The Masked Singer host shares twins Monroe and Moroccan, 11, with ex-wife Mariah Carey. He and Brittany Bell, meanwhile, have welcomed three kids — Golden, 5, Powerful, 21 months, and Messiah, 3 months.

The rapper shares twins Zion and Zillion, 19 months and Beautiful, 2 months, with Abby De La Rosa. In June 2021, Cannon welcomed son Zen with Alyssa Scott, but the infant died in December of that year after suffering a brain tumor. The twosome expanded their brood in December 2022 with the addition of their daughter Halo. The Wild ‘n Out host is also the father of daughter Onyx, 4 months, whom he shares with LaNisha Cole.