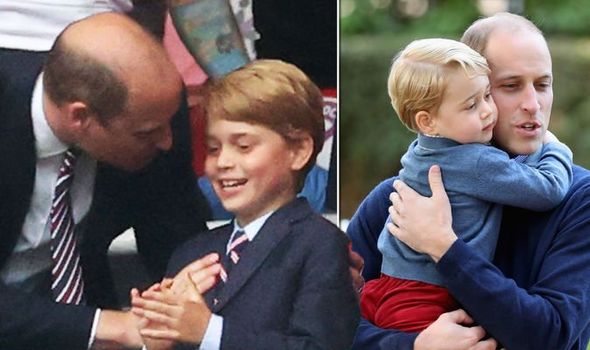 Body language expert Judi James analysed sweet pictures of the prince, from his early years up to today. She likened the third-in-line to the throne with his later grandmother, Princess Diana.

She went on: “Like her, though, the signals might have been slightly misleading as it is also possible to see a side of George that suggests quiet confidence and a love of exploring and trying things first.

“He also looks very playful. Despite looking well-behaved and even reflective at times, plus rather mature for his years, he will also throw himself into spontaneous and uninhibited playful fun too, as we can see when he is romping and play-fighting his dad with the help of his younger siblings.”

A young Prince George has displayed both traits of being camera shy, and also occasionally appearing comfortable with the cameras.

Judi said: “The only word to describe the very young George is ‘cute’, with his displays of utter delight when he was allowed to explore and his rather shy grins to the camera and the crowds when he began to appear in public.”

However, his school years showed a shy and more worried George, the expert claimed.

“By the time he started school he was wearing an expression of slightly wary shyness with his chin down here and his brows puckered in doubt,” Judi said.

George lives a life mostly away from the public eye. However, he did attend the recent football match.

DON’T MISS
‘Who dresses a child like that?’: Anger over Prince George in suit [FURY]
‘She would love him to’: Kate’s hope for George [PARENTING]
Kate’s mysterious sapphires from the Queen [ANALYSIS]

It’s clear, according to the expert, George has come to admire his father, emulating him.

Judi said: “His most recent outings have shown us a very different and much more confident and mature-looking boy keen to mirror the dad he clearly adores and dress and behave in a very similar way to Prince William to signal close bonding bordering on hero-worship.

“George is still happy walking holding onto his dad or his mum’s hand but he looks unfazed and confident here standing up at the rail enjoying all the action.

“Any glances back at his parents seemed to be minimal and when he did look back and up it was to share the moment of gleeful triumph when England scored.”

And there is one particular way the third-in-line to the throne is beginning to act like his great-grandmother, the Queen, Judi claims.

“George also seems to be showing another trait that the Queen, in particular, excels in: stoicism,” Judi said.

“Although he was bursting with joy as he performed his triumph rituals at that England goal, there looked to be no tears or tantrums when they lost the match, just a slightly long face in response to what must have been a bitter disappointment.”

Another expert analysed William, George and Kate at the Euros finals together.

Darren Stanton, also known as “the human lie detector”, told Express.co.uk: “It’s quite rare to see William and Kate Letting their hair down in a social situation and just truly being happy to spend the time together.”

He went on: “Prince William is displaying elation and happiness at the proceedings as Kate and the young prince embraced and hugged.”

These were not the only scenes of royal and father bonding recently. Fans were treated to a rare glimpse of Kate Middleton and her father Michael at Wimbledon.

The pair attended day 13 of the Wimbledon 2021 Championships.