Museum of Contemporary Art from July 19 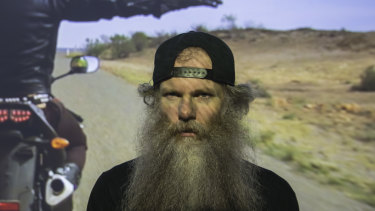 A surfer hangs upside down on his board, beneath the waves. Protagonist and image are both inverted, and the footage is slowed, making him appear more like a yogi on a mat. His head occasionally dips down for air, momentarily disappearing.

This is Pacific Undertow Sequence (Bondi) (2010), the namesake video piece in the exhibition Shaun Gladwell: Pacific Undertow. This survey, the largest yet of Gladwell’s work, interweaves works from across two decades, some widely known and others less so, creating an expanded context for the work of this Australian artist who is best known for his videos featuring surfing, skateboarding, and other urban pastimes.

Around the corner we find Gladwell’s breakout hit video work, Storm Sequence (2000). Depicting Gladwell twisting and turning on his skateboard in slow motion as a storm rolls in over the ocean beyond, Storm Sequence is a study in balance: between the figure’s upper and lower limbs, between control and being overpowered, between humans and the natural world. Gladwell notes that the work was made as a counterpoint to the high-energy aesthetics of skateboarding videos, in an attempt to capture the more meditative side of the experience. 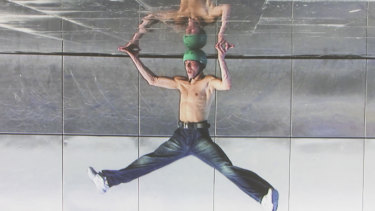 While skateboarding generally brings to mind jolting, scraping and the occupation of urban spaces, Gladwell distills it to a series of balletic swivels performed in solitude. Along with Pacific Undertow and the silver aerosol painting Cosmology (Air Antwerpen) (2011), this opening chapter of the exhibition seeks to foreground Gladwell’s interest in the contemplative and sublime.

Gladwell makes work about the body under pressure, often drawing attention to the graceful male form where one would least expect it. In the second gallery, two Australian soldiers perform a pas de deux in the work Double Field/Viewfinder (Tarin Kowt) (2009-10), which Gladwell made in 2009
while on a residency in Afghanistan as the Australian War Memorial’s official war artist. 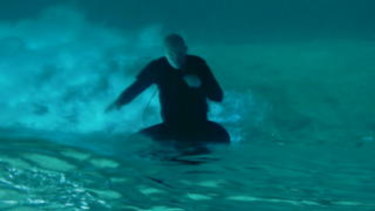 Rifles still slung over their shoulders and each armed with a video camera, the men train their viewfinders on each other and mirror each other’s movements. The resulting work is presented across two screens flush up against each other in a corner and recalls combat strategy, human relationships, childlike mimicry, and, for Gladwell, sporting tactics (in particular David Campese’s famous ‘goose step’).

Double Field/Viewfinder portrays a wry humour in a most serious of settings, and unlike the urban athletes depicted elsewhere, these men are not generally accustomed to performing publicly, making it one of the most compelling works in the show.

Gladwell works deftly across media, but a performative and mischievous element is central to much of his work. Several paintings made nearly 20 years ago used grand English society portraiture as a starting point, with Gladwell distorting the images in Photoshop before painstakingly copying the
results for a postcolonial take.

A series of photographic Inverts from the early to mid-2010s show Gladwell and friends suspended from statues of various notable folk, looking strangely unnatural in their upright-ness. The artist explains that these actions only took a few seconds, describing them as like “effervescent graffiti” – however, images take on a new gravity in an era where public monuments are increasingly questioned.

Works commissioned for the exhibition include a series of prints, augmented reality (AR) and virtual reality (VR) works. The VR work Electronic Monuments (2019) expands on Gladwell’s experiments with inversions, putting the audience inside a virtual version of the gallery where artworks and other imagery converge on each other, and the viewer.

Unlike the completely disorienting nature of some VR experiences, this work places the viewer within a deconstructed version of the gallery’s architecture before introducing new elements – rather like a dream where you’re aware of being in a familiar location even though it doesn’t exactly look like it.

While artists’ quotidian interests filter into their work in different ways, Gladwell’s passion for skateboarding and its sporting cousins sits unfiltered, front and centre of his artwork, alongside his interest in art history and appropriation.

Curators Blair French and Natasha Bullock have carefully selected works from across Gladwell’s practice, allowing his vision to unfurl across the show,
dispelling preconceptions and providing a richer context for understanding.