Given the hit to Victoria's economy, and economies around the world, not too many people would dispute the need for urgent stimulus measures in this week's state budget. But beyond the announcements the budget contains, the government will need to move quickly on its vision on two key things going forward.

On the spending side, initiatives such as those to construct social housing and progress a number of infrastructure projects will be welcome. The challenges and degrees of difficulty, however, are overshadowed by the story the government will need to tell about what ought to drive the Victorian economy well into the future and how it will make the revenue side of the state budget more sustainable. 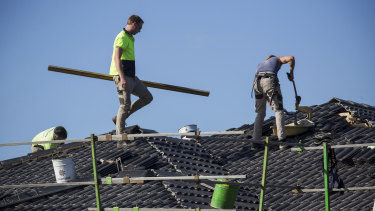 Budget initiatives such as social housing will be welcome.Credit:Paul Jeffers

Take major infrastructure projects. New and enhanced public transport assets, roads, freight and logistics are all vital. At their essence, however, they are the state’s arteries and, as much as it is essential to maximise their operation, once you've achieved that, the other question is what runs through them.

Just what the government's plans are on fronts such as manufacturing, Victoria's food bowl and high-tech industries following COVID are yet to be seen in their full breadth. To be fair, there have been some piecemeal announcements of business support. But the government has not responded, for instance, to the Opposition’s Back to Work and Back in Business plan which it released many weeks ago.

Obviously, the budget is the immediate priority, but the government needs a broader economic vision that outlines what will drive Victoria’s economic growth in the years ahead. Better infrastructure is vital to this story, but it in no way constitutes the complete picture.

Where, for example, is a comprehensive strategy to partner with local universities to make Melbourne, and Victoria more generally, the obvious home for research and development in advanced manufactures like defence and related industries? We are already a world leader in health and medical research.

This is especially so when Victoria's tertiary education sector is unrivalled in Australia. This is work that COVID exigencies may well have disrupted, but should never have been allowed to postpone. And it's one key reason why the Premier's decision to create a crisis cabinet was ill-advised, given a smaller group of cabinet ministers have been bearing all the burdens of governing while outer ministers have been less exposed to the urgency of important policy work.

The need for this work is all the more important given the staggering numbers that this week's budget will reveal. An operating deficit in 2020-21 of $23 billion is simply staggering. NSW will deliver an operating budget deficit of $16 billion. That Victorian debt will be $86 billion this financial year, and $155 billion in three years’ time, only heightens the obligation the government has to assure us that, in addition to managing the spending side, it can also manage the revenue side of the budget as well.

All governments will face this problem, although to differing degrees. For example, NSW will reach peak debt in 2023-24 of $104 billion, 30 per cent less in nominal terms than where Victoria will be at the same time.

But at least NSW appears to be exploring options to stabilise its revenue base well into the future.

Dominic Perrottet’s announcement this week that NSW it will introduce a transitional process from stamp duty to a broad-based property tax is, whatever your own view, one constructive way of looking at available options to make the revenue side of the NSW state budget more resilient over time to economic fluctuations and variations in effective demand. That it has enshrined choice in the transition and also modulated the gradient of the transition over many years into the future, has given this proposal considerable appeal.

It's not the only reform option open to state and territories, but given they are so reliant on property-related taxes, it's an obvious area for improvement. These limitations on revenue options for state and territory governments should make more obvious the need for all of them to collaborate and to deal with the Commonwealth in ways that will give them a wider suite of reform options to the revenue base.

In saying this, no one has yet been able to crack the nut on vertical fiscal imbalance (with the Commonwealth responsible for raising revenue with states responsible for spending most of it). That doesn't mean, however, that intergovernmental efforts, perhaps led by the states, should not be pursued.

Right now interest rates are low so that the costs of borrowing are effectively zero.

Obviously, stimulus is needed now. But none of this means we should pretend that at some point in the future, especially once unemployment is restored to much lower levels, we should not be thinking about how to make our state budget, not to mention state budgets across the country, more sustainable.

This is not beyond us and many of the solutions are far closer to home than we might assume. I was speaking to somebody this week about the government's public housing announcement in the budget of $5.3 billion. It’s a worthy announcement given a 25 per cent blowout in public housing waiting lists over the last two years. Having made this point, however, I also reminded my interlocutor that the $5.3 billion announced for this purpose was less than the combined blowouts on the Westgate Tunnel and Melbourne Metro projects of over $6 billion. And that's only two projects.

How the budget is managed and against what vision will matter most, not just to us but future generations.

John Pesutto is a senior fellow at the School of Government at Melbourne University, a panellist on ABC Melbourne’s The Party Line and was Victoria’s shadow attorney-general from 2014 to 2018.