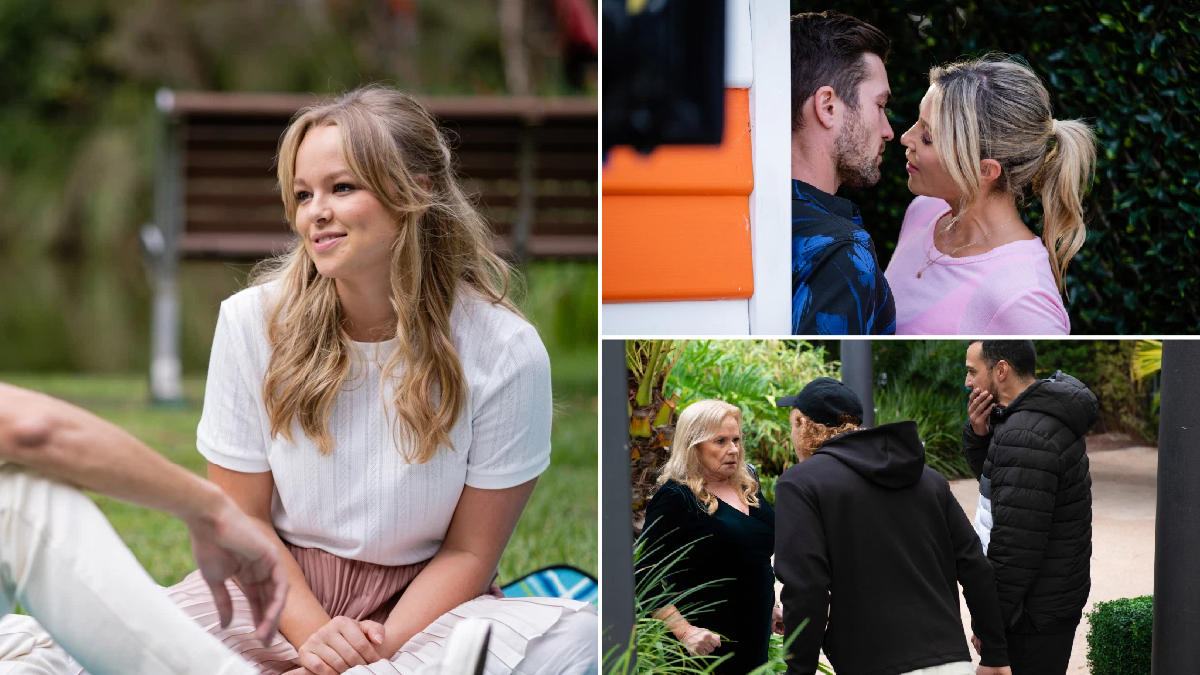 Erinsborough is a dangerous place to be this week as both Sheila (Colette Mann) and Nicolette (Charlotte Chimes) face two very different kinds of peril in Neighbours. But which one will come out unscathed?

And elsewhere a familiar face pops back from beyond the grave, because when in Neighbours is anyone actually truly dead?

Sheila becomes the target of the thugs who are after Levi (Richie Morris) after he poked the hornets’ nest. When Levi and later Yashvi (Olivia Junkeer) ill-advisedly continue their surveillance of the thugs, the thugs get tipped off and they are none too happy about it. Sheila decides to get involved and take matters into her own hands, which gives the attackers the opportunity they need.

Hendrix (Benny Turland) calls Nicolette to visit the vineyard as he is worried about Leo’s (Tim Kano) intentions with Chloe (April Rose Pengilly). But his plan goes drastically wrong when it ends with Nic and her baby in serious danger. Will anyone find them in time?

Sonya (Eve Morey) is making a cheeky comeback this week when Toadie (Ryan Moloney) sees her in a daydream and starts to wonder what the vision is trying to tell him about his new relationship.

It’s getting steamy at Lassiters, and when it gets like that you know Amy (Jacinta Stapleton) is almost always involved. She is forced to work on a special project with Ned (Ben Hall) and it tests all of her willpower not to just jump his bones.

And Paul Robinson (Stefan Dennis) acts completely out of character when he decides to play matchmaker in Harlow’s (Jemma Donovan) love life. Will he be a successful cupid?

Here’s what’s ahead in Neighbours:

You can’t keep a good ghost down

Toadie’s feeling a bit wobbly after having a flashback of Sonya at the nursery and he can’t cope. The ghost of his past relationship is still haunting him, is it a sign he shouldn’t be with Mel? He tells Karl and Susan how perturbed he is – his feelings compounded by the fact that this hasn’t happened with any other girlfriend. Is it Sonya telling him from beyond the grave that he’s with the wrong woman? Maybe it’s her saying Toadie’s finally found the right one. Mama Susan comes to the rescue with some wise words, so Toadie decides to come clean with Mel. He tells her he’s feeling uber guilty about replacing Sonya with her, which takes her aback. She assures him she’s not there to replace

anyone and wants to help him keep Sonya’s memory alive. Mel and Toadie are finally taking some huge steps forwards.

Aaron and David have had their ups and downs with Nic’s pregnancy, not least because she’s recently said some worrying things that made them believe she might do a midnight flit with their offspring. And after her latest trick with the ante-natal class, they decide something has to be done. They corner Nic and tell her this needs addressing, they can’t go on with this anxiety. She is left feeling terrible and does her best to reassure them she’s not feeling possessive over the baby. It’s all of theirs and they are a little family. She promises she’ll never do anything like that again. But can they believe her?

Paul as cupid is a weird mental image, but it’s happening, people! Paul is so desperate to get Harlow well away from Brent that he decides to do the unthinkable – he wants to matchmake. When he realises giving her a bigger job to keep her busy at the hotel isn’t helping, he starts to push her closer towards new boy Jesse. And biggest surprise of all, Harlow is open to her grandfather setting her up with some guy. It seems she’s turned a corner, happy in her new job and the prospect of dating. But things are never that simple, instead she is secretly concocting her own devious plan.

Wanting to make herself look good at work, Roxy tries to come up with an idea to get the Shorts and Briefs festival off the ground. Her suggestion is one that many a Neighbours fan will be thankful for, and it’s to get Ned starring in it, and showing some skin. To ramp up the heat, Roxy suggests Amy features in it too and she agrees. But as they start filming, it quickly becomes clear they’re starring in their own version of Too Hot To Handle as Amy is on the verge of breaking all the rules with Ned. She’s so flustered she almost can’t contain herself. Ned clocks this, and, amused by her fluster, teases her to make it worse. Will she be able to control her urges?

Leo is working hard on his gameplan and when he gets Chloe alone, he finally gets her to admit all is not hunky dory with her and Nicolette. It’s music to his ears and he knows he is on to something. Hendrix is also on to him, but Leo clocks this and sends Hendrix off to lunch to give him and Chloe some alone time. This only sends up a hundred more red flags to Hendrix, who calls Nic and convinces her to come to the vineyard. Little does he know, his request puts her and her baby in huge danger. Nic arrives at the site ready for a romantic catch up with her lover, but Leo has other ideas and pulls Chloe off into a meeting. Nic is left wandering through the vineyard on her own, but as she does she suffers a terrible fall that leaves her and her baby in a bad way.

Kyle is worried for his cousin after his hairbrained decision to go after his attackers alone. He makes Levi promise he’ll leave Mitch and Nelson alone, and though Levi agrees, neither had banked on Yashvi’s misplaced desire to help getting the better of them. She heads off to spy on the attackers, but she doesn’t realise they have cottoned on to what she’s up to.

This kicks off a huge chain of events. She tries to convince Levi to go after them again himself, but this triggers a huge panic attack. And later, having had enough of her snooping, Mitch and Nelson aim to get at Levi another way – Having learned what they’re up to Sheila confronts him, and they seize their opportunity…