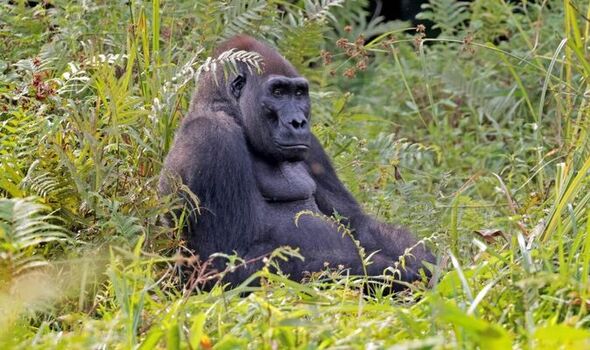 Finally exhausted by his exertion, tiny Malumbi drops to the ground and jumps on his mother’s back, wrapping his arms around her as they go. Seeing a critically-endangered gorilla in the wild, as I was fortunate to do in Gabon’s rainforest in August, is a precious and unforgettable experience.

But spending three years among them is life-changing. It alters your view of everything. When Manucunian biologist Lee White arrived in Gabon on central Africa’s Atlantic coast in 1989, he found a verdant paradise where rainforests covered 88 per cent of the land. It was ideal for his doctoral research into forestry impacts on wildlife.

“It was like going back in time to a world where nature was still there,” he says today.

“It was everywhere. The numbers and diversity of wildlife made it a paradise for a biologist like me. I’ve never seen that anywhere else.”

So, after completing his PhD in 1992, he stayed on to help save the animals and their habitats from destruction.

This launched an extraordinary journey that, over the next two decades, would see Lee persuading the country’s then president, Omar Bongo, to reverse the rainforests’ gradual destruction before becoming a key player in Gabon’s green-led economic policies.

Last month Gabon’s President Ali Bongo Ondimba, Omar’s son, was in London to mark the former French colony’s entry into the Commonwealth with a flag-raising ceremony, four months after it was admitted into the organisation headed by King Charles.

White was appointed Gabon’s Minister of Forests, Oceans, Environment and Climate Change in 2019 and wants the country, Africa’s seventh-largest oil producer, to become a model against climate change by transitioning towards sustainable forestry.

He believes joining the Commonwealth will help that fight. “We think that we can influence the climate change negotiations, and potentially the biodiversity negotiations, through engagement with other Commonwealth partners in a bloc,” he says.

And what happens in this tiny African nation, home to some two million people, matters because its actions will have repercussions for us all.

“If we don’t preserve the Congo Basin then we’ve lost the fight against climate change,” says White. “We know that if we cut the Gabonese forest, we lose the rainfall in the Sahel in northern Nigeria.

“If you cut the forests of the DRC [Democratic Republic of the Congo] you lose the rain in Ethiopia and [therefore] the Blue Nile and agriculture in Egypt.”

The Congo Basin is the world’s second-largest rainforest and could soon be our best hope at mitigating climate change.

The exponential destruction of the Amazon rainforest is now so uncontrollable – a record 1,540 square miles were lost in Brazil from January to June – that vast swathes of the woodland emit more CO2 than they absorb.

The future seems bleak despite the recent defeat of President Jair Bolsonaro in Brazil, under whose watch deforestation has reached its highest levels.

But this is where Gabon’s impact is vital. It is the most carbon-positive nation on the planet, a carbon sink. Last year it absorbed 100 million tons of CO2 in its forests and it only lost 11,900 hectares between 2010 and 2020, about 0.05 per cent, according to the Forest Stewardship Council.

But its success, surprisingly, has been driven by sustainably logging trees through the country’s growing timber industry, which will eventually replace its dwindling oil revenues.

“I expect timber transformation [to account for] 40 per cent of the economy and even half of it in 15 years time,” says White.

“Over the next ten years, we should be able to get to a $10billion timber industry that if successful creates 300,000 jobs.”

Logging trees sustainably sounds like an oxymoron but White insists it’s not. If the rainforest “isn’t valuable for the man in the street” then they won’t be motivated to protect the Congo Basin, he explains.

White knows what he’s talking about because he’s spent his whole life in conservationism. He moved to Uganda with his parents, aged three, after his father got a teaching job at a university.

His family adopted a chimpanzee spent habituating them. That visitor numbers to almost 3,000 thousands of pounds of extra and the great apes. “Gorilla help support the national whom they named Cedric.

“He was my brother, almost,” laughs White, who created his first national park in Nigeria when he was 22. In 2002, he formed a group of scientists who spurred the former president into saving Gabon’s rainforests after revealing their plight at a cabinet meeting.

“I spoke for over an hour, which I now know is unusual,” White says.

“I had a 120-slide Powerpoint presentation and the last slide was a map of all the national parks. The room was shocked by the end.”

Omar Bongo immediately pulled over his ministers and chastised them over the wanton destruction.

He had no idea about Gabon’s incredible bio-diversity having experienced a privileged but closeted upbringing.

“He said, ‘That’s what I want,'” says White. “He was so inspired by this new vision of Gabon. He conceived the park system in his mind and told us to put it down on paper to formalise it.” And White had other support in the room.

“President Ali Bongo, then a minister, wandered over to me. He was a supporter already and was encouraging his father. He said, ‘That was a really great presentation Lee, we really have to do this’.”

Twenty years later, sustainable timber transformation is in full swing. But how does it work? Hardwood from the country’s populous okoumé trees is used to manufacture plywood, furniture, boats and even musical instruments.

Crucially, they need light and oxygen to thrive so sustainable logging can replenish their numbers faster than if they were left alone.

“When we log the forest we simulate the reduction of emissions from the atmosphere because when trees grow, they absorb the carbon dioxide that is in the atmosphere,” explains carbon expert Vincent Medjibe, part of the National Parks Agency responsible for protecting the parks.

In 2012, Gabon began a carbon inventory of all its trees. It is the job of Vincent and his team to measure the carbon by taking samples from the soil.

They’ve calculated that just two trees per hectare can be felled every 25 years.

Carbon monitoring followed a ban on the export of logs in 2010 to prevent illegal timber smuggling and stimulate home manufacturing.

That same year, PresidentAli Bongo launched Gabon’s Special Economic Zone (GSEZ) in Nkok, where today one-third of the country’s wood is processed so it can be traced from forest to port. A new QR-coded tracing system being rolled out can pinpoint the exact location of the log’s origin.

The huge industrial park allows international companies to manufacture everything from logs and planks to plywood and high-end furniture.

“Gabon, Nigeria and Ghana all import furniture,” explains Mohit Agrawal, GSEZ’s manager. “Everything comes from China, Turkey or India. We want to create that in Gabon or have factories in other countries to use our laminated boards.”

In 2018, President Ali Bongo ruled that all logging companies working in Gabon must be Forest Stewardship Council-certified by 2025.

“We’re more than 60 per cent of the way through getting ours at the moment and we’re committed to getting that certification,” says Paul Dolan, CEO of Woodbois. The British company leases 175,000 hectares of forest in Gabon and processes trees into hardwood and softwood at a sawmill and veneer factory in the south.

“We decided to make that investment into Gabon because of how forward-thinking it has been in its forestry goals and environmental commitments,” he adds. Gabon’s efforts are laudable but corruption has long dogged the country. Now satellite images monitor trees and record any disappearances.

Last year, Gabon became the first African country to be paid for protecting its rainforests. It has also been approved for 187 million tonnes of carbon credits, a permit purchased by a business, government or organisation to offset their carbon emissions by supporting models that reduce carbon by an equivalent amount.

Environmental campaigners claim this allows polluting companies to buy their way out. But Lee White says carbon credits could help pay for Gabon to develop its infrastructure and roads.

“Ecotourism is never going to be more than five or ten per cent of the Gabonese economy,” White adds. “We just don’t have enough really spectacular places in the country to become a Costa Rica where 30 per cent of the economy is tourism.”

Yet White insists it is “inconceivable” to let the Congo Basin fail.

“The Democratic Republic of the Congo is losing 500,000 hectares of their forest a year,” he says. “Am I optimistic? If you’re not optimistic in my profession then you become depressed and give up.”

He continues: “We’re onto something with Gabon’s model of conservation and sustainable development and forestry. It’s not sustainable yet but give it a few years then any leader in Gabon will maintain the forest sector because it will be so important for jobs and the national economy – and that’s the only way to make it sustainable.”