News that Gwendoline Christie, the actor who played the majestic and brave Ser Brienne of Tarth in HBO's blockbuster series Game of Thrones, nominated herself for an Emmy award after HBO didn't put her forward was met with a resounding virtual fist bump online. 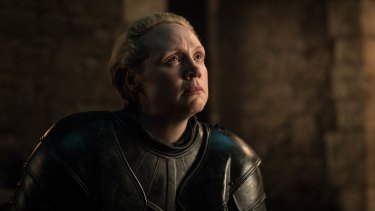 Gwendoline Christie as Brienne of Tarth in Game of Thrones.Credit:HBO/Helen Sloan

Christie shared the news with her two million Instagram followers, captioning a picture of her nomination confirmation email  with an appropriate amount of exclamation marks.

A rep from HBO confirmed to CBS News that Christie – along with several of her Game of Thrones co-stars, including Alfie Allen (who played Theon Greyjoy) – had stumped up the $US225 ($319) entry fee and thrown her own damn hat into the ring.

The internet, rightly, couldn't get enough of it, with fans turning to Twitter to applaud the move.

The celebration around Christie's confidence in her own ability, and her utter badass-ery, speaks to a shift away from women not tooting their own trumpet lest they be considered "boastful" or "aggressive".

These two adjectives, along with others which don't bear repeating, have long been thrown at women who've dare to go after what they're worth in a manner similar to their male colleagues; the male colleagues who, mostly, would never think to question their right to be there, or to apply for a job where they meet just one of the 76 criteria, or to share their deeply unoriginal ideas in a brainstorming session. The same colleagues who haven't needed to self-censure lest they come across as too assertive, too confident or too, well, much.

We've seen this shift, also, with the champion US women's soccer team demanding equal pay (and crowds at their games taking up the chant) and how the #MeToo movement has finally shaken sexist office cultures.

According to recent research published in the Harvard Business Review (HBR), women do ask for pay raises. The problem is, they don't get them nearly as often as men.

As the HBR article concluded, "Perhaps women have always asked more than they’ve gotten credit for, and more detailed data just allows us to finally see it. The bottom line is that the patterns we have found are consistent with the idea that women’s requests for advancement are treated differently from men’s requests. Asking does not mean getting — at least if you are a female."

However, that Christie putting herself forward for an award many fans of the show will agree she is rightly deserving of is a thing worth discussing, even if that discussion involves a fist pump, shows there is still work to be done.

Executive career coach Sandra Sdraulig AM, who runs women-focused coaching company Through the Roof, says, along with imposter syndrome,  one of the things that can hold women back in putting themselves forward for jobs, promotions, or awards is a stronger belief in fairness.

"Women have a greater sense of fairness, a belief that, if we work harder we will get noticed and get rewarded. But that's not always the case, the world is not fair," she says.

The truth is, as most of us can attest, it's often merely those who big themselves up, or those with "front", who get ahead. Even if their work is nothing special.

"You have to be your own advocate often, and this connects in with your own sense of self-worth."

Building confidence and self-worth, says Ms Sdraulig, comes with being authentic, understanding more about yourself and having the courage to feel fear but do things anyway.

The most important thing, though, is to take action, says Ms Sdraulig, noting that Gwendoline Christie's self-nomination falls firmly into that category.

"[That] small piece of action she took has been quite consequential, it could be consequential to her career and her courage is an important component in shifting the dialogue," she says.

Psychologist Meredith Fuller believes we're in an exciting time when it comes to shifting conversations around women (and men) in the workplace, and beyond.

"There is a questioning of a lot of these unfortunate tendencies that just don’t have in any place in the here and now," says Ms Fuller.

Ms Fuller sees undertaking an"accurate self-assessment [and] realising you don’t need to wait until someone puts us forward", as crucial in women becoming better able to "reclaim space".

And that's the case whether that space is an Emmy nod, a new job, or just speaking up in your next team strategy meeting.