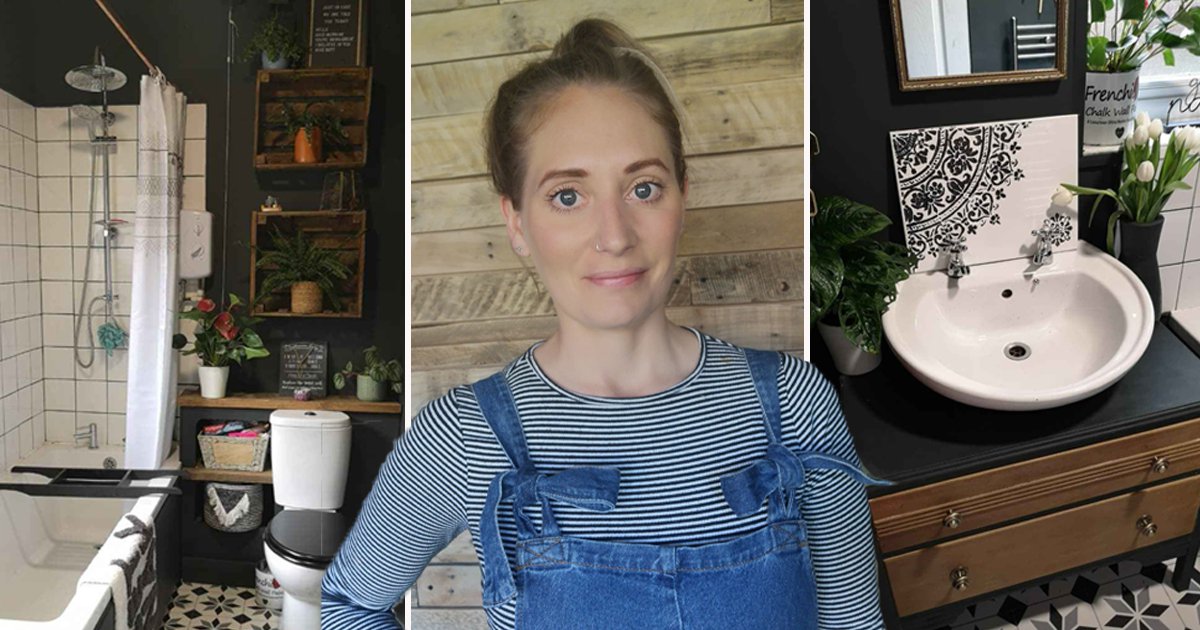 A thrifty mum has created the jungle bathroom trend that’s all over Instagram – but used up-cycled pieces to keep costs down.

Nat Cresswell had been considering a bathroom makeover for a while but had been putting it off due to the size of the project.

Not to mention her newborn baby was, naturally, taking up a lot of her time, too.

Nat, from Derbyshire, told LatestDeals.co.uk: ‘I’d been thinking of going dark in the bathroom for a while, but I’d been putting it off as every time I looked at it I just thought “it’s a big job.”

‘I have a newborn baby too, so whilst also being really busy caring for her (and procrastinating), it gave me more time to think about how I wanted it.

‘I knew the colours and the sink idea I wanted and I looked a little on Pinterest and on the Frenchic fan forum at bathrooms which confirmed the style choice.’

The 35-year-old support worker for United Response also wanted to merge her love of greenery with the bathroom upgrade.

She added: ‘I love plants and I knew I wanted some in there, so that’s why I thought of the dark green to compliment the tones and shades.’

The first step of her renovation involved taking everything out the bathroom before ripping up the old flooring and replastering – all of which took about a week.

Once dry, Nat painted the walls and ceiling with Frenchic wall paint in the shade Dark Forest – then did the bathroom door and bath side panels in Frenchic Blackjack.

The mum-of-one also created some under sink storage with some drawers she picked up for free from Facebook Marketplace.

She stripped off the paint and sanded them down before using Frenchic browning wax and adding some new handles from B&Q.

Nat said: ‘To make the drawers fit under the sink I asked my boyfriend to help as I couldn’t figure it out. He marked out where to cut into the unit.

‘I only needed to cut into the top drawer too and I made that one secure and still usable by making a little box around where I had cut it.

‘We took the pedestal off the sink, then put the drawers underneath and the sink on – hey presto, it worked.’

Nat’s partner also added a new box behind the toilet area to cover the piping and a curtain rail from copper pipe.

‘Then the plants were moved in,’ Nat added.

‘The big hanging one was a gift from my mum. I already had the mirror above the sink and the one above the radiator was another Facebook Marketplace find.’

Overall, the project took five days to complete once the new plaster was dry and, because most of the furniture was up-cycled, it only cost around £250 in total.

And it’s safe to say that Nat is thrilled with the finished product.

She said: ‘I’m so happy with the final result. When it was all done I had a nice relaxing bath with candles and a glass of wine. It was so cosy.’