‘Hotel has bed bugs’: Thousands of people reveal four words that ‘ruin a vacation’ in a hilarious Twitter thread

Lost wallets, mosquitoes and hearing ‘I want a divorce’: A recent viral thread on Twitter revealed a lot about what constitutes people’s idea of a vacation nightmare.

The conversation, which was started by users behind the social media game account @RideOrDieTags, asked people to describe their worst ever vacation using just four words.

Their original tweet garnered many generic responses like ‘Boss keeps calling you’, ‘There is no WiFi’, ‘Everyone’s exes are invited’, ‘I lost my luggage’ and ‘Your flight is cancelled’. 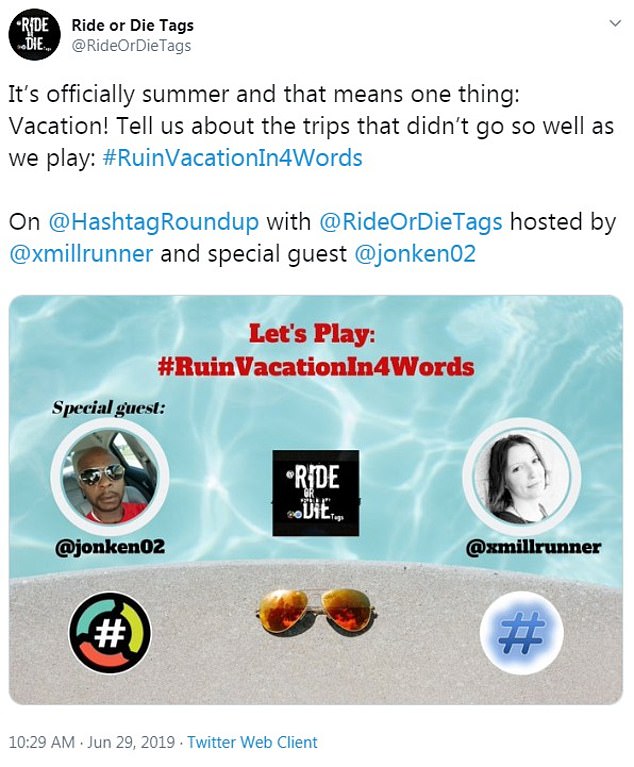 Viral: Twitter users weighed in with short tales of their worst vacation ever 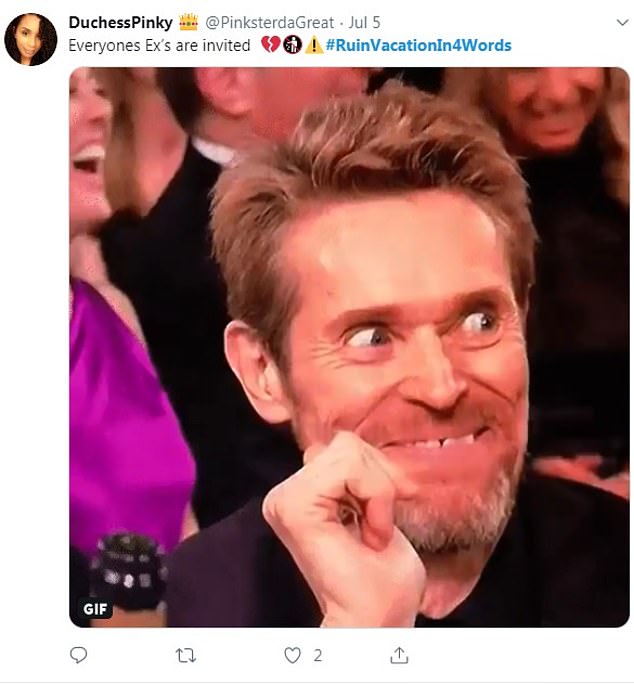 Yikes: The thought of former flames showing up was often mentioned as a vacation nightmare 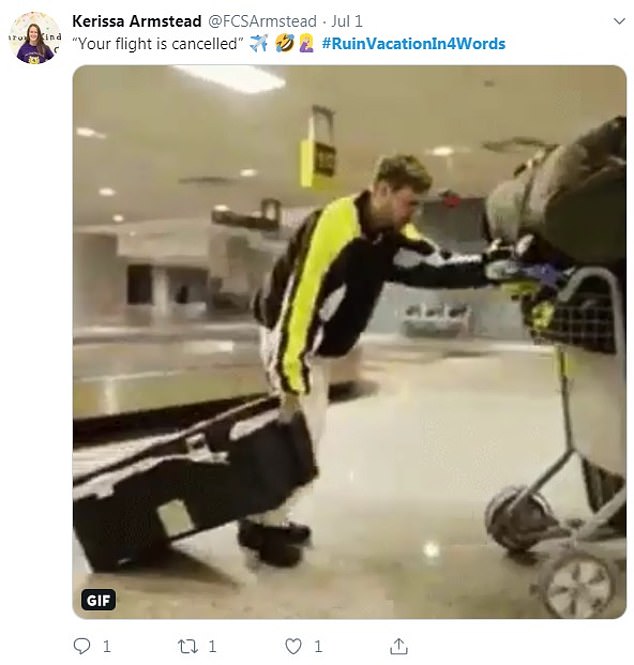 However, hilarious and zany responses such as ‘Trump shares your jacuzzi’, ‘I’m pregnant. Not yours’ and ‘Uncle John escaped prison’ garnered much more traction.

Digs like ‘Heading to Fyre Festival’ also did the rounds, referencing the major chaos that ensued from the infamous fraudulent luxury festival organized in 2017.

One user, Rachel Johnson, even weighed in with her own staggering memory: ‘I want a divorce’.

The Nebraska-based hospital chaplain shared that she was ‘on the receiving end of that one’ from her then-husband, but has lost 100 lbs since their split and is infinitely happier now.

Unsurprisingly, politics featured heavily with tweets saying nothing would ruin a relaxing vacation quicker than, ‘Trump supporters are invited’ or ‘AOC is our bartender’ (referring to Democratic politician Alexandria Ocasio-Cortez).

Several individuals made bad-taste jokes about the recent spate of tourists dying under suspicious circumstances after drinking items from hotel mini bars in the Dominican Republic.

Meanwhile, some users misunderstood the point altogether, sending status updates with three, five – and in some cases eighteen and thirty six -word disasters, prompting eye rolls among other tweeters.

One couple, identified as Robert S. from America, shared a photo of a sunburned couple, virtually sizzled to a crisp.

Real life nightmare: People made a joke out of the festival disaster that made global headlines 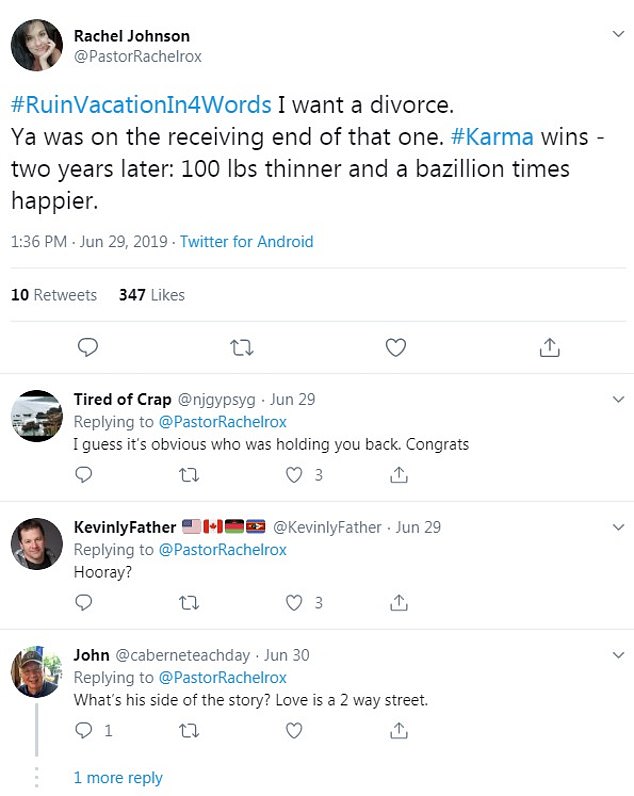 Ruined: Having your husband ask for a divorce mid-vacation was one of the most interacted with on the thread

Controversial: When asked what would ruin a vacation, some users turned the mystery of deaths in the Dominican Republic into a punchline 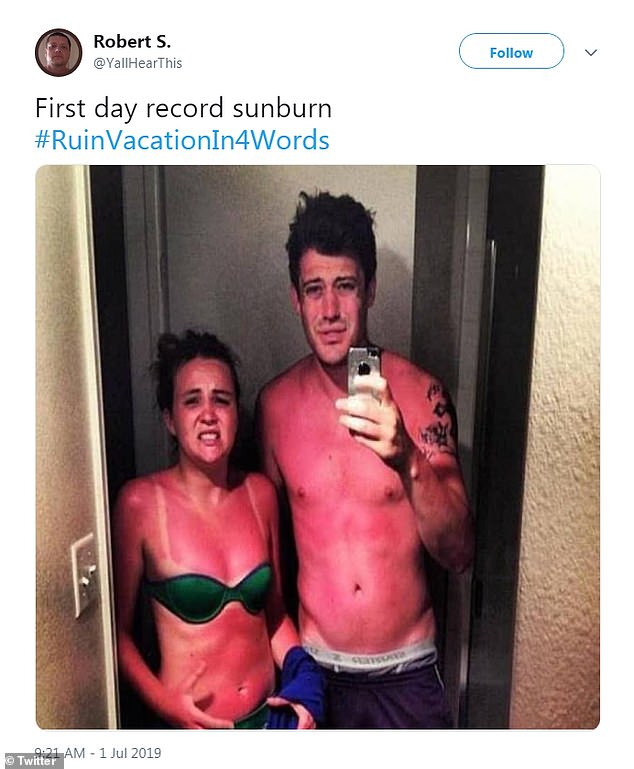 Forgot the factor: A user circulated this photo of a couple with lobster-like burns in the viral vacation nightmares thread 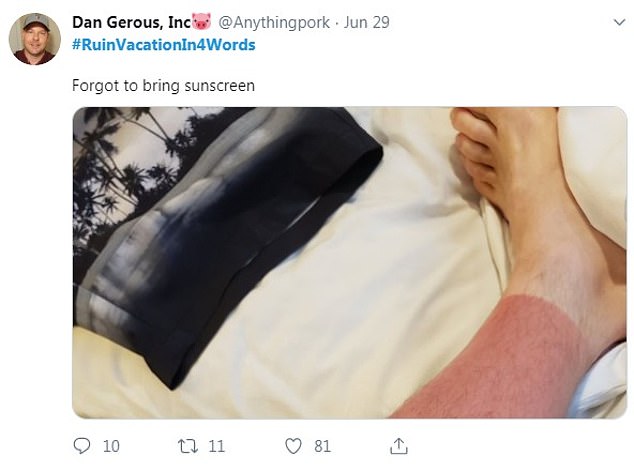 Ouch: Many users cited that sunburn would instantly ruin their vacation 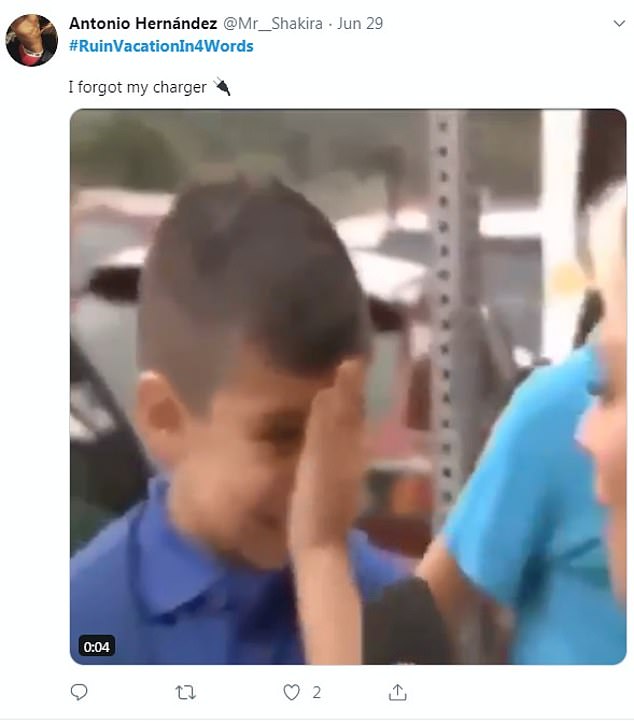 D’oh: Twitter users cited complaints like ‘there is no WiFi’ and’I forgot my charger’ would compromise their vacation time 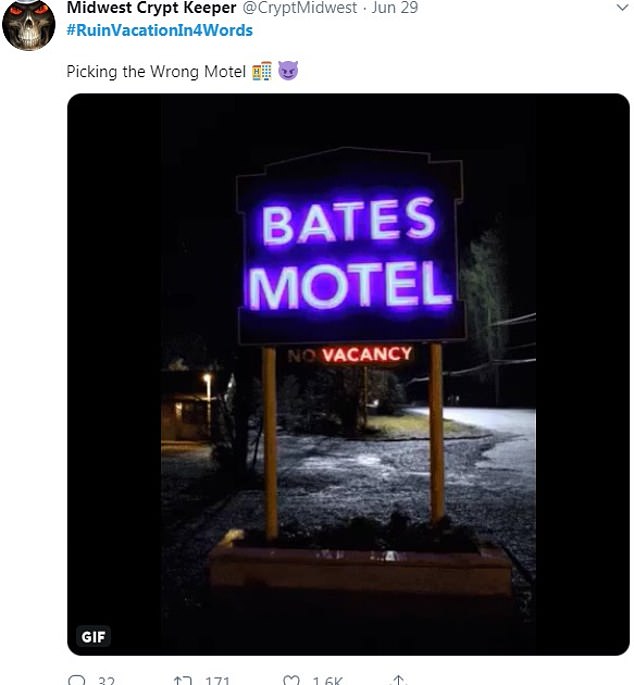 Living nightmare: Users made references to pop culture moments like staying at the fictional Bates Motel from the hit horror drama 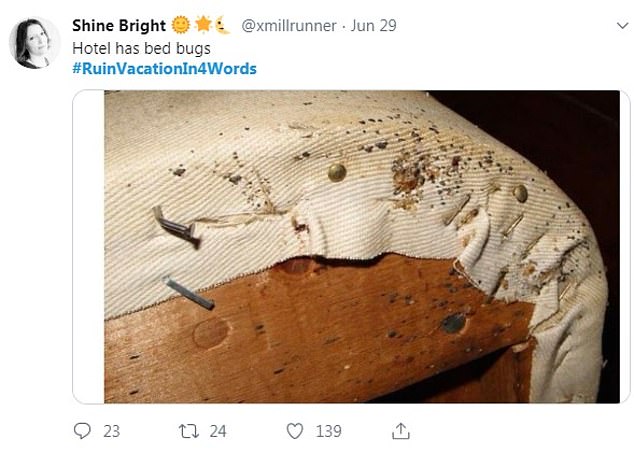 Hotel horror: A user shared a nightmare-inducing image of a room infested by bed bugs