Victoria is now home to 43,000 fewer people than at the start of the pandemic, making it the only state in the nation to record a drop in population since coronavirus hit Australia.

The state shrank by about enough people to fill the Victorian border city of Wodonga in the 12 months to March on Australian Bureau of Statistics data. Victoria’s population declined 0.6 per cent since the pandemic hit, as international border closures to stop the spread of the virus meant offshore migration failed to make up for those leaving the state. 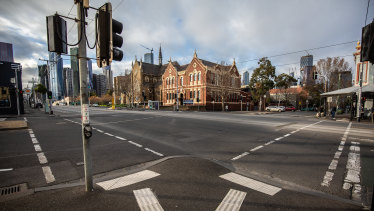 Melbourne’s streets have been empty during lockdowns.Credit:Scott McNaughton

In every other state and territory there was an increase in residents, ranging from a modest 0.1 per cent population growth in NSW to a high of 0.9 per cent in Queensland.

Queensland benefited from people moving into the state from other parts of the country, while Victoria was most negatively affected by migration as people moved interstate or overseas.

“Should Australia reach its COVID-19 vaccination rate targets in the coming months, borders could be re-opened to vaccinated travellers, enabling the re-entry of international tourists, students and highly skilled workers. A boost in labour supply and net overseas migration could help alleviate the pressures of an ageing population,” Mr Felsman said.

He said the Victorian decline was the first since June 1981 and influenced by lockdowns, while NSW experienced the slowest growth on record.

Victoria faced the longest lockdowns in the country during the coronavirus outbreaks last year and is now in the midst of a surge of cases of the Delta variant alongside NSW where case numbers are at record highs. About 53,500 people left Victoria to head overseas during the 12-month period to March and more than 18,200 moved interstate. In NSW, 13,500 people went overseas and 17,800 moved to another state.

KPMG’s urban and regional planner Terry Rawnsley said the closed borders had left Melbourne in particular unable to rely on its pulling power, attracting people from abroad for jobs, education and lifestyle. However, he expects the COVID-19 border restrictions, once eased, will see a return to more normal flows of population growth.

“International migration is always driven around stronger economies. It’ll come back to how the various parts of the country respond to open borders internationally and domestically,” he said.

He also noted Victorians weren’t having as many babies as before the lockdowns, defying the increase in other states like Queensland. “Traditionally economic strength and certainty is linked to fertility.”

EY chief economist Jo Masters expects the slump to have effects into the future with population growth typically tied to economic growth.

“Victoria will continue to struggle with the long shadow from the 2020 lockdown for some time. Nearly 43,000 people net leaving Victoria in the March quarter would normally be front page news nationally – but the situation we’re in now is anything but normal,” she said.