The winding road towards Broken Bay seemed to capture all the dangers for Scott Morrison in the final stretch of this election campaign when he and his team turned off the Pacific Highway on Wednesday afternoon and headed down the hill and through the bush to the beachside town of Umina.

Tight corners. Wet roads. Steep descents. The rain came down on the convoy as it passed through the NSW Central Coast to a community meeting in the marginal seat of Robertson, held by the prime minister’s friend and ally Lucy Wicks, but now very much in play. This did not look like the goat track to victory Morrison climbed three years ago. It was more like a journey where a small mistake would be enough to skid off the road. 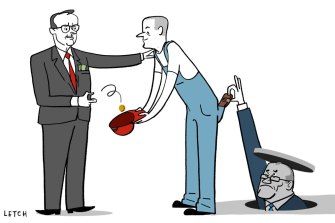 Morrison continues to campaign with energy and discipline. Those who hate him are reluctant to admit that he can be truly formidable in the way he lands an attack on his opponent, outlines his policies and appeals to Australians who share his conservative social values.

But the fifth week of the campaign has been a hard slog for the prime minister when issues have turned against him and some of his decisions – such as his support for Katherine Deves as the Liberal candidate in Warringah – are putting immense strain on his own side.

What’s more, Anthony Albanese has found his rhythm after his unforced errors in the opening stages. On wages, for instance, the Labor leader jumped a little too far on the minimum wage but found the politics worked both ways. Within a day, Morrison was exposed for opposing higher salaries. So Albanese held his line.

The argument over wages was the big policy gulf of the week and the criticism of Albanese was not limited to the Liberal party room. A few members of the Labor caucus chewed their fingernails while trying to figure out how to extract their leader from his eager support for a 5.1 per cent boost to the minimum wage.

Albanese has tapped into the public mood with his call for higher incomes and, until now, has taken a dual-track approach to the problem: a serious economic message about lifting productivity along with an emotional appeal about caring for those who are doing it tough. On Tuesday, however, he moved from the sentiment to the specific. He agreed to a number.

Fixing a wage claim to the inflation rate was the problem. With his simple answer – “absolutely” – it looked like Albanese believed the wage increase had to be the same as inflation no matter what. The more robust answer was to echo the Labor achievements of the Hawke and Keating years by promising to lift productivity and keep wages ahead of the cost of living. Albanese said exactly this in a significant speech last week but this was lost in his one-word answer on Tuesday.

Morrison also leapt too far and too fast in his response. His attack was so ferocious The Australian said he called the Labor stance “economic vandalism” – as if Albanese was picking up red spray paint at Bunnings just because he wanted people on $20.33 an hour to earn $1 more. Morrison denied using the “vandal” line but this did not fix the problem.

With Albanese holding a strong lead in the polls, Morrison needed a way to shake up the policy argument. He threw a new sneer at the Labor leader – that he was a “loose unit on the economy” – but his entire argument made a salary increase look frightening. He said the increase would throw fuel on the fire of rising interest rates, push up the cost of living and drive small employers out of business.

No amount of spin could winch Morrison out of this ditch. He was telling voters their demands for higher wages would be ruinous. Morrison wanted a row on what he believes to be his strong suit – managing the economy – but he might not end up with the result he had in mind.

That is the story of this week – Morrison on the attack, Albanese on the ascendant. Both of them lost the leaders’ debate on the Nine Network last Sunday (and, for the record, nobody could save the two men from themselves that night; the debate was honest, engrossing and unedifying all at once) but there was a clear winner in the Seven Network debate on Wednesday.

The audience picked Albanese as the victor on Seven and one theme shone through: they thought he had more empathy and they responded to his talk about a better future, which just happens to be the Labor slogan. This is the result of Morrison having to campaign on his record. What is his agenda for the next term? Too often, he is either running a scare or stuck in the past.

The anxiety among the Liberals is not hard to see. The Liberal MPs who are fighting the “teal” independents in city electorates cannot risk having Morrison next to them. The distance is not just physical. Treasurer Josh Frydenberg has separated himself from Morrison on two issues in this campaign: first, he disagreed with the prime minister’s “kangaroo court” claim about the NSW Independent Commission Against Corruption; second, he disagreed when Morrison defended Deves.

The fear in the Liberal camp is that Labor’s character assassination of Morrison is now complete. If this is true, the election is all over.

But that is not how Morrison sees things. Those around him are sceptical of the national polling showing Labor winning 80 seats when they believe this contest remains a series of byelections, each one different. “It’s up for grabs and the reason is the significant size of the soft vote,” says one of them. On their numbers, a quarter of all voters remain undecided or not confident about their leaning to one side or the other.

Guess what? They are probably right. About a quarter of respondents are “uncommitted” in the Resolve Political Monitor, too. While the latest RPM shows the government is in dire trouble, every poll is merely a snapshot in time with a degree of uncertainty. Things can change fast.

What if Queensland is a stalemate? What if the Coalition snares a few seats in NSW to offset Labor gains elsewhere? What if national polling is no guide at all to what happens in two or three Tasmanian seats?

Rather than seeing a winding road to their doom, those around Morrison see several roads ahead: victory with a narrow majority, a hung Parliament where they cling to power with the help of Bob Katter and, of course, triumph for Labor with an outright majority or a hung Parliament.

The key point, however, is that Morrison did not halt the Labor advance this week. After nine years in power, the government’s fate now depends on Morrison’s campaign launch this Sunday and the furious pace of his campaign in the final days.