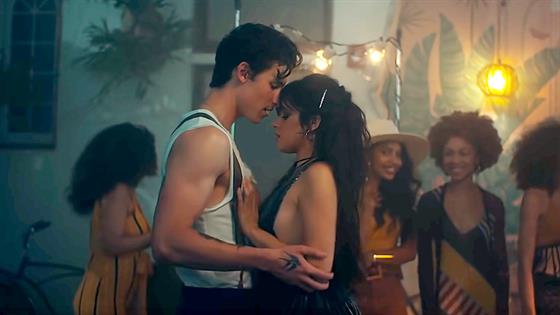 Is it getting hot in here or is it just us??

So it’s not surprising that the two showed undeniable, sizzling chemistry while rehearsing for “Señorita,” as seen in a new behind-the-scenes video that is just ooh la la la.

In the footage, released on YouTube on Thursday, Mendes and Cabello are shown dressed casually and learning and performing their seductive dance and acting routines seen in the finished video. He picks her up and she straddles him with her legs wrapped around his waist as he pushes her against the wall.

“THIS IS A REAL LIFE DIRTY DANCING MOVIE ARE YOU KIDDING ME,” one commentator wrote on YouTube.

Watch the video below:

There are silly moments too.

In the clip, Mendes also accidentally lets go of Cabello’s hand mid-dance, sending her tumbling to the ground—timed to the lyric, “Don’t you let me fall.”

The two also take opportunities to play with and touch each other.

“And we thought the original was hot !! Omg this is fire,” another person commented.

Things have been heating up between Mendes and Cabello in real life. Earlier this month, the two celebrated his 21st birthday together at a club in New York City and showed more PDA.

They’re also hung out with each other’s parents in recent weeks.