A weakened but resilient Tropical Storm Elsa was moving swiftly up the East Coast after killing at least one person in Florida Wednesday and injuring several others when a possible tornado struck a campground at a Navy base in southeast Georgia.

Some 60 million people were under tropical storm warnings and watches early Thursday, according to CBS news weather producer David Parkinson.

The National Hurricane Center said Elsa’s winds weakened to 40 mph as it made its way over South Carolina early Thursday. Elsa was expected to continue into North Carolina later in the day, pass near the eastern mid-Atlantic states by Thursday night and move near or over the northeastern United States on Friday.

Some re-strengthening is possible Thursday night and Friday while the system moves close to the northeastern United States, the center said. 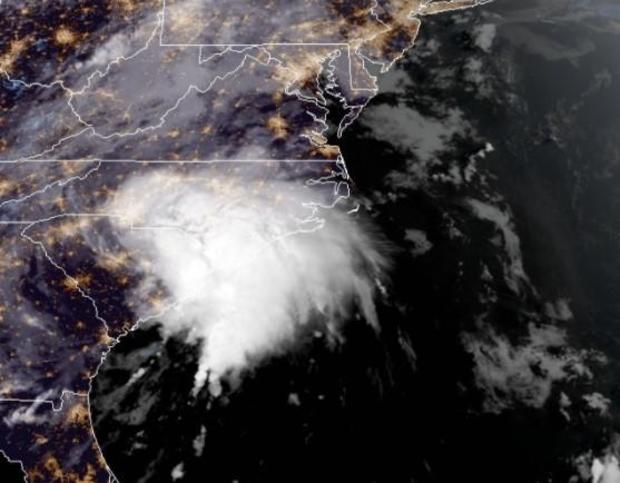 Elsa should bring two-to-four inches of rain “from the Carolinas straight into New England,” Parkinson said, adding that flooding was possible in some places and that tornados were possible in the coastal Carolinas Thursday.

Elsa seemed to spare Florida from significant damage, though authorities in Jacksonville, Florida, said one person was killed when a tree fell and struck two cars. The National Weather Service reported 50 mph wind gusts in the city. The tree fell during heavy rains and no one else was injured, according to Capt. Eric Prosswimmer of the Jacksonville Fire Rescue Department.

“Now is a time to remember … that weather is unpredictable,” Jacksonville Mayor Lenny Curry said during a news conference Wednesday evening as he urged drivers to stay off the road. “This is really early in the (hurricane) season. We’re just outside of the July 4th holiday, we’ve had our first storm and, unfortunately, we’ve had a fatality.”

In nearby Camden County, Georgia, a possible tornado struck a park for recreational vehicles at Kings Bay Naval Submarine Base. About 10 people were injured and taken to hospitals by ambulance, said base spokesman Scott Bassett. The extent of their injuries wasn’t immediately clear. He said some buildings on the base appeared to have been damaged as well.

Sergio Rodriguez, who lives near the RV park, said he raced to the scene fearing friends staying at the park might be hurt.

Cellphone video he filmed at the scene showed trees bent low among scattered debris. He said ambulances arrived and began treating dazed people trying to understand what had happened.

“A bunch of folks had lacerations and were just banged around,” Rodriguez said. “A majority of folks were in their trailers when it happened.”