What is ayahuasca? Class A psychoactive drug Prince Harry claims helped ‘clear the misery’ of losing his mother is a plant-based drink with powerful hallucinogenic properties

As his bombshell memoir Spare was published in the UK this week, Prince Harry revealed in interviews that he had dabbled in psychedelic drugs while struggling with the death of his mother Princess Diana.

The Duke of Sussex, 38, told 60 Minutes interviewer Anderson Coooper that substances including ayahuasca and magic mushrooms were like ‘medicine’ after Diana died in a car crash in 1997.

But ayahuasca, a South American psychoative drink which is consumed in line with shamanic practices, can cause hallucinations, anxiety and intense nausea. Earlier this year, a coroner warned against the potentially deadly consequences of shamanic ‘healing’ rituals after hearing how a young artist, Katie Hyatt, 32, suffered a mental breakdown and took her own life as her parents told the inquest they believed she had consumed ayahuasca.

Harry told Cooper he would not recommend people take the substances ‘recreationally’ but added: ‘But doing it with the right people if you are suffering from a huge amount of loss, grief or trauma, then these things have a way of working as a medicine.’ 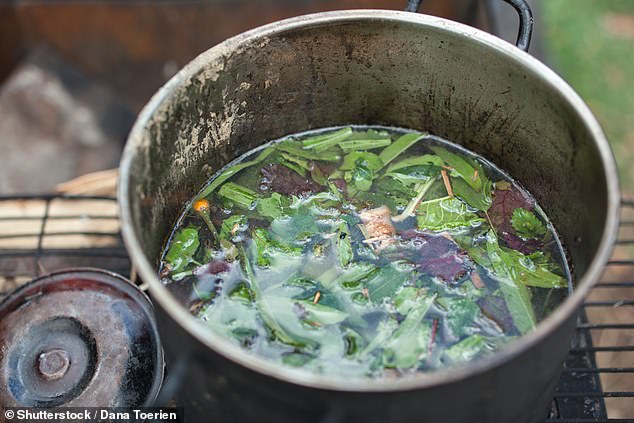 Ayahuasca, a drink native to South American countries, is made by boiling together vine stems along with leaves from a chacruna shrub and has hallucinogenic properties

The drink, which is illegal in the UK, is made by boiling together vine stems along with leaves from a chacruna shrub — both native to the Amazonia region.

The psychedelic brew contains the compound N,N-Dymethyltriptamine (DMT) which is one of the world’s most powerful known hallucinogens.

Similar to drugs like LSD and psilocybin, DMT has demonstrated its ability to increase connectivity between different brain networks and boost synaptic plasticity.

As well as hallucinations, people who have tried the drink have reported out-of-body experiences and feelings of euphoria.

Speaking about his experience of the psychedelic, Harry said: ‘For me, they cleared the windscreen, the windshield, the misery of loss. They cleared away this idea that I had in my head that … I needed to cry to prove to my mother that I missed [my mother]. When in fact, all she wanted was for me to be happy.’

Prince Harry’s account of using the drug is not uncommon, with addicts and people who have suffered trauma in their lives also claiming the hallucinogenic helped them, but doctors have expressed concerns about the drug’s use.

Last year, actor Will Smith revealed during an interview with Oprah Winfrey that he drank the brew over 12 times during a retreat in Peru, while having marital problems with his wife Jada.

However, while the properties of ayahuasca are now being studied in relation to healing trauma, medical professionals have raised concerns about their safety.

Just last week an inquest heard how a young artist took her own life after drinking the hallucinogenic ‘tea’ in a retreat in Malvern, Worcestershire.

According to emails sent to Miss Hyatt and seen by the Daily Mail, the retreat was to feature wachuma, described as a ‘teacher plant’ allowing participants to ‘dive deeply into ourselves’.

As well as wachuma, which is made from a ‘sacred’ cactus and contains illegal hallucinogenic mescaline, Miss Hyatt’s parents told the inquest they believe she also ingested ayahuasca – another Class A drug – at the retreat.

‘These are not innocent drugs– they need to be used in the context of carefully controlled trials,’ said her father Ray, a retired hospital consultant.

‘The kind of advice she got from the organisers of the retreat when she realised she was deteriorating was useless, frankly.

‘We wouldn’t want anybody else’s health to deteriorate in the way that Kate did.’

Many doctors are worried that hallucinogens’ rise to the mainstream is causing vulnerable people to take them without proper preparation and psychological support.

The effects of ayahuasca can be categorised into three stages.

First, users have a sense of increased relaxation. They will feel sleepy and start to yawn a lot.

The second stage is purging, where users will repeatedly throw up. This is thought to have a cleansing effect on the body.

The third stage is an altered state of consciousness, during which users may have hallucinations where they see vivid and lucid beings, commonly ‘mechanical elves’. Some people see and have conversations with people from their past.

This week, a Brit couple were arrested in Murcia, Spain, accused of hosting unlicensed shamanic healing sessions using ayahuasca and other psychedelics.

Spanish police said the couple, aged 47 and 52, were offering their services online and offering accommodation for up to 16 people at a time, and arrested them after interrupting a ‘healing session’ for seven people of different nationalities.

A spokesman for the Civil Guard in Murcia confirmed: ‘The Civil Guard, as part of an operation codenamed Kambo, has arrested two people who captured clients for supposed shamanic healing sessions.

‘A number of harmful substances have been seized which were being administered without any sanitary controls to Spaniards and people from other European countries.

‘The British couple offered their services online with promotional material in which they advertised their rural property as a house of healing orientated towards self-help groups and things like addiction disintoxication.

‘They had no licence or authorisation. Despite this they were charging people £40 a night for minimum stays of three nights, with group offers of £450 a day for 16 guests.’

In May last year Spanish police raided a luxury Costa del Sol villa after a British holidaymaker claimed he had been offered ayahuasca when he complained about his accommodation.

The tourist told detectives he was invited to ‘chill out’ by taking the hallucinogenic brew after discovering he was being expected to share a bedroom with strangers.

Cops discovered an illegal party with 40 people was going on at the villa in the upmarket resort of Marbella when they went to investigate.