The Nationals have reached such a desperate point in their long argument over the leadership that their meeting on Monday looks like the last chance saloon for those who want a rumble.

Barnaby Joyce will walk into the meeting in the likely knowledge the numbers will never be any better for him than they are right now. 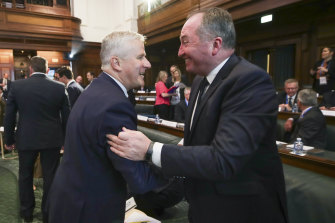 Joyce failed early last year to take down Michael McCormack as Nationals leader and Deputy Prime Minister but his supporters always called it a narrow loss.

The cold logic of a challenge this week is in the timing. First, this is the last week of Parliament before the winter break, so the leadership can be settled well in advance of the next election.

Second, Joyce cannot wait until after that election. One of his allies, Queenslander George Christensen, intends to leave Parliament at the next poll. Another likely supporter, Ken O’Dowd, is also retiring.

A third vote Joyce needs in the party room, Northern Territory Senator Sam McMahon, is being challenged for the Country Liberal Party preselection this Saturday. If Alice Springs deputy mayor Jacinta Price wins the ballot, as some expect, then Joyce could be another vote down.

So the Nationals party room is changing. The next election will take it further away from the toxic rivalries of 2018, when Joyce stepped down after headlines over his private life and a claim of sexual harassment, which he strongly denied.

The spin from the Joyce camp on the February 2020 spill was that McCormack only gained 11 of the 21 votes in the room. If that is true, it has taken a very long time for Joyce to swing a single additional vote his way. The rumour is that Andrew Gee, who represents Calare in western NSW, switched to Joyce last week.

McCormack has held the job longer than any leader since John Anderson left in 2005, but he is an unlikely survivor. His lacklustre performance in Parliament last week had critics on the right wondering again whether he should lead the party to the election.

This is not a referendum on climate change but the issue is part of the dynamic. McCormack rejected a net zero emissions target for 2050 only last Thursday but the mood in the party room is for a more assertive stance, like the objections aired by Resources Minister Keith Pitt and Senate leader Bridget McKenzie.

Given the Nationals do not have a single minister from the Senate, the support around McKenzie in the upper house could help decide the outcome.

The deputy leader, David Littleproud, has told colleagues he will not challenge McCormack. But Littleproud is also positioned to lead if the turmoil sets up this chance. He would come through the middle just as Scott Morrison did between Malcolm Turnbull and Peter Dutton three years ago.

So this could be the last chance saloon for McCormack, too. Everything could turn on whether the first move is a direct challenge, one man against another, or a no confidence motion that opens the field to Littleproud if it passes.

The Nationals party room is a volatile group, full of jealousies and grudges. In this saloon, you never know who will shoot first.