State elections can be parochial, and Queensland's poll on Saturday is no different, with issues ranging from fixing the Bruce Highway to rolling out a youth curfew in two northern cities.

But this election has resonance beyond its borders. Annastacia Palaszczuk's Labor Party is seeking a third term in government against Deb Frecklington and the LNP, which needs nine more seats to take power. 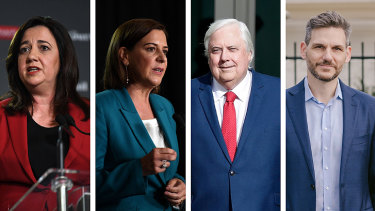 The contest has proven to be close, with minority government a possibility. Here's why election 2020 matters outside of the Sunshine State.

The election will be the first referendum on a premier’s response to the COVID-19 pandemic. Queensland Premier Annastacia Palaszczuk has conceded as much.

"If it means I have to lose the election, I will risk all that if it means keeping Queenslanders safe," she said when challenged on keeping borders closed.

While polls suggest a majority of Queenslanders are satisfied with the Premier’s handling of the health crisis, she has faced pressure from the NSW and federal governments, airlines, tourism operators, and some border businesses and residents to ease restrictions.

Ms Frecklington and members of her frontbench had called for Queensland's border to open on July 1 but she is now on a unity ticket with the premier, promising to listen to the health advice.

The states have asserted their role in the federation, and the election is a test of whether Palaszczuk's "Queensland first" approach is politically astute.

While the Northern Territory and ACT have held elections this year, Queensland is the first state off the electoral blocks since the pandemic hit.

‘How good is Queensland’

Labor failed to win a seat north of Brisbane in the 2019 federal election, when Prime Minister Scott Morrison recorded a "miracle win".

"How good is Queensland?" Mr Morrison declared, crediting the Sunshine State for the victory. 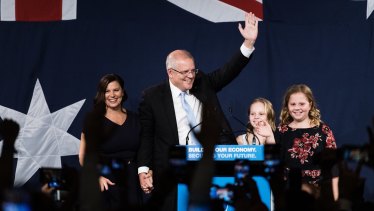 Scott Morrison with his family, claiming victory in the ballroom of the Sofitel Wentworth in Sydney. Credit: James Brickwood

The Liberal National Party wrested Longman, which covers parts of the southern Sunshine Coast, and Herbert, in north Queensland, from Labor at the last federal election.

These seats partially align with the key state electorates of Pumicestone held by the LNP and Townsville and Mundingburra held by Labor. About 18 months on from the federal election, the Queensland results could indicate if the conservatives have lost or gained support.

In the four-week election campaign, Ms Palaszczuk and Opposition Leader Deb Frecklington have frequently set up camp in the north Queensland city.

Labor currently holds the two marginal seats in play: Townsville on 0.38 per cent and Mundingburra on 1.13 per cent.

The LNP holds Pumicestone, which covers parts of the Longman electorate, on a margin of 0.84 per cent.

Major party strategists will be reading the entrails for federal implications of the state results, particularly in these three seats.

The numbers are staggering.

Queensland has more than 3.3 million voters and officials expect 70 per cent will have cast their vote early or popped their ballot in the post. Election officials declare this is a "record", but it's too soon to determine if it's a trend. 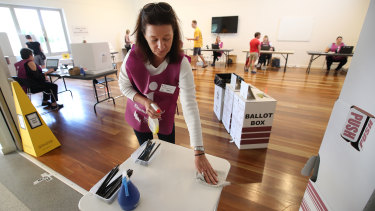 Many people have avoided polling places during the pandemic by voting early by mail.Credit:Jono Searle/Getty Images

This will stress-test the Electoral Commission of Queensland’s ability to deliver a timely result, but it believes it is up to the task.

A seismic shift to early voting will reshape campaign strategy around the country, putting pressure on parties to reveal big-ticket promises in the first half of the campaign. For instance, Labor and the LNP made significant pledges to fix the Bruce Highway before the first fortnight of electioneering was done.

Griffith University political expert Paul Williams said the majority of people who cast their ballot early where rusted-on voters passionate about re-electing or removing the government.

"These voters may lock themselves out of future campaign announcements, but because they're rusted-on voters, it is likely it wouldn't have changed their minds," Dr Williams said.

"But this trend does change how the political parties distribute information to voters. The parties are now front-ending their campaigns with big-ticket items."

"One thing I've noticed is the amount of direct mail has risen this election," Dr Kefford said.

"The parties obviously know this [spike] is going on and are trying to pivot in other ways, such as social media.

"It also clearly has an effect on the direction of preference flows, with fewer voters following the how-to-vote cards.

"It could mean it delays us knowing the result if it's close. It might delay the result by a day or two – or a week in some seats – because it is a challenge to work out the preferences."

A record 12 political parties and 597 candidates are standing for election in 93 seats across Queensland.

Labor, the LNP and Greens have candidates in every electorate.

He found a "high non-major party vote of close to 25 per cent" at the last federal election.

"There does seem to be a fracturing of the political landscape that has been going on probably for the last couple of [election] cycles," he said.

"That move away from solid support behind the major parties is starting to take a more definite shape and form.

"[But] we've been talking for a while about a possible return of some of that drifting vote back to the major parties in these kind of [pandemic] conditions." 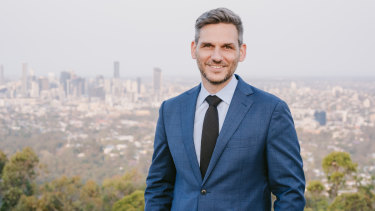 While local issues will play a part and the LNP’s decision to preference Labor last is likely to hurt Ms Trad, the minor party’s vote will be revealing given the pitched battle between the Greens and Labor in Sydney, Melbourne, and Brisbane’s inner-city seats at federal and state levels. 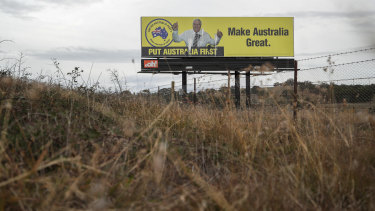 A Clive Palmer billboard on the Federal Highway in the lead up to the federal election.Credit:Alex Ellinghausen

The party failed to win a federal seat but Mr Palmer claimed his campaign had triggered the swing against Labor and secured another term for Mr Morrison.

He has recycled the strategy in the Queensland election on a smaller budget, with wife Anna fronting the campaign alleging Labor planned to introduce a "death tax".

Ms Palaszczuk has rubbished the claim.

Mr Palmer’s company has poured $4.7 million in the UAP’s coffers since the start of September. A Queensland University of Technology Digital Media Research Centre analysis shows of all registered parties in the state election, the UAP has been the biggest spender on Facebook advertisements.

While the federal and state "death tax" campaigns are similar, Dr Salisbury believed the Bill Shorten-led federal opposition was an easier target than a relatively popular premier with incumbency.

"I don't think it will be as effective," he said of the state campaign. "Perhaps more people are seeing him and his campaign for what it is."

Dr Salisbury said Mr Palmer was fielding more candidates but had a smaller policy platform for this election, compared with the 2015 election when LNP Premier Campbell Newman was swept from power.

Five years ago, Mr Palmer seemed to want a "seat at the table".

"That doesn't seem to be the ambition any more. It's a spoiler", Dr Salisbury said.

Get our Morning & Evening Edition newsletters