Miley Cyrus video featuring an obese model sparks a furious debate, with some fans claiming it’s ‘glorifying’ weight problems – while others accuse critics of being fatphobic

An influencer is facing a furious backlash after accusing Miley Cyrus of glorifying obesity by casting model and actress Angelina Duplisea, in her latest music video.

Pamela Umeh, 22, from Ireland, shared Miley Cyrus’s post of Angelina Duplisea in the singer’s new music video on Twitter and claimed that obesity shouldn’t be accepted or praised.

Angelina Duplisea has posed for the cover of fine art magazine Fang and starred in projects with the likes of Mariah Carey and Jessie J, as well as appearing in the TV series 1000 ways to Die and 2012 movie She Wants Me.

But Pamela argued that the obese model’s appearance in Miley’s video shouldn’t be praised, as obesity can lead to health complications.

The post, which has been re-tweeted more than 40,000 times, received a flood of responses, as many accused Pamela of being fatphobic. 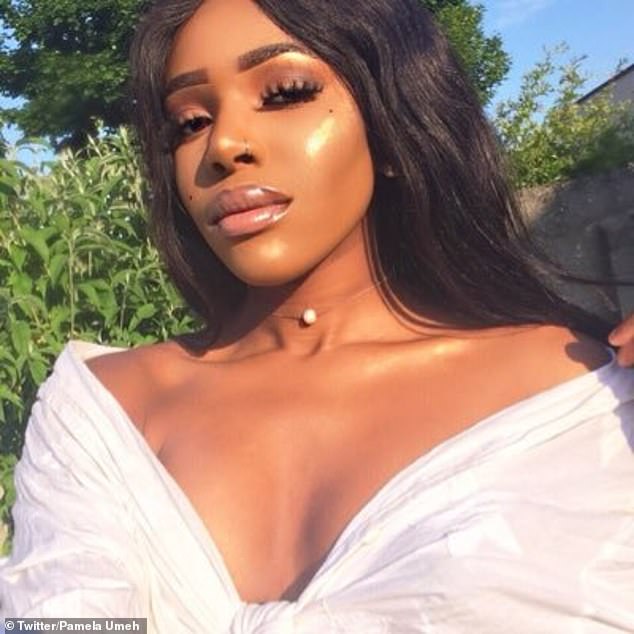 Pamela Umeh (pictured), 22, from Ireland, sparked a debate over the representation of different body sizes in the media 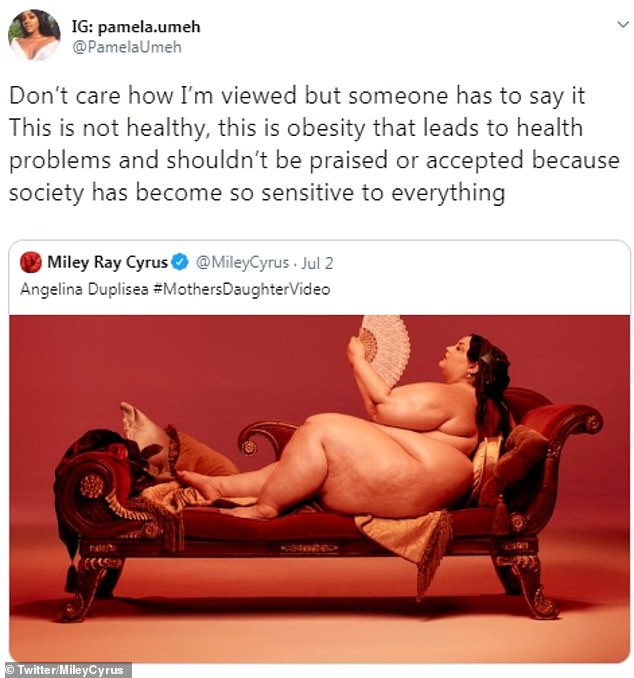 Posting on Twitter, Pamela argued that Miley Cyrus’s choice to cast Angelina Duplisea (pictured) in her new music video is an example of praising and accepting obesity

Urging for all body sizes to be accepted, a stream of Twitter users blasted Pamela and explained why it’s necessary for a diverse range of bodies to be represented in the media.

One person wrote: ‘It’s not about her health. We aren’t trying to say this is healthy. It’s about not having unwarranted opinions on her SIZE, it’s not needed.

‘We’re not celebrating obesity, we want women to be comfortable showing their bodies no matter where they are in their body journey.

Another said: ‘So basically big people can’t have photo shoots or apparently upload dope pictures because it somehow ‘praises’ obesity.

‘Not once did she mention her weight should be praised but that’s what you got from her uploading a picture of herself? Got it’

A flood of Twitter users blasted Pamela, arguing that all body sizes should be represented in the media, and said Angelina Duplisea isn’t inspiring people to gain weight

Adding to the debate, others blasted Pamela for failing to consider that some overweight people may have health conditions that make it difficult to manage their body size.

One person wrote: ‘Obesity can be genetic and when it is, very difficult to control or reduce.

‘Some obese people choose to rather live and enjoy the time they have than spend it on trying to lose weight and getting more hurt or even dying in the process sis.’

Another said: ‘Someone’s body type doesn’t always reflect their healthy… there are several health conditions that make it difficult to loose weight and just because someone is obese doesn’t mean they aren’t taking care of their body.

‘People who are thin are never questioned about their health.’

A number of Twitter users agreed with Pamela that there is an obesity epidemic that society refuses to discuss.

‘Everyone talking about ‘body positivity’ but there’s nothing positive about being fat, overweight or whatever you want to call it, period. I understand some people can’t help it because of a medical issue but that’s like 5%. Rest of y’all just fat,’ one wrote.

Another said: ‘People clearly need to say it because it’s getting more and more out of hand, it’s a common think people see and now people think it’s cool to be overweight and unhealthy when it’s not, it costs everyone so everyone should speak about the impact of it’

A third added: ‘Should be said that this is MORBID obesity not just ordinary obesity. One can be healthy and technically obese but there is now way to be healthy and morbidly obese’