Woman, 31, who would sweat through a top a DAY and refused to wear white has regained her confidence after a £1,300 treatment – and now doesn’t have to wear deodorant ever again

A woman who was unable to wear white, without getting sweat patches, has told how an innovative treatment permanently solved her disorder.

Grace Mouser, 31, from London, who would sweat through a top a day, was unable to wear white while suffering from hyperhidrosis.

The sales manager was given prescription-strength antiperspirants by her doctor and even tried Botox injections to try and keep her sweating at bay.

Realising the expense of having regular Botox injections, Grace began researching a permanent solution for her excessive sweating.

She told how MiraDry, which costs more than £1000, stopped her sweating and has also freed her from wearing deodorant. 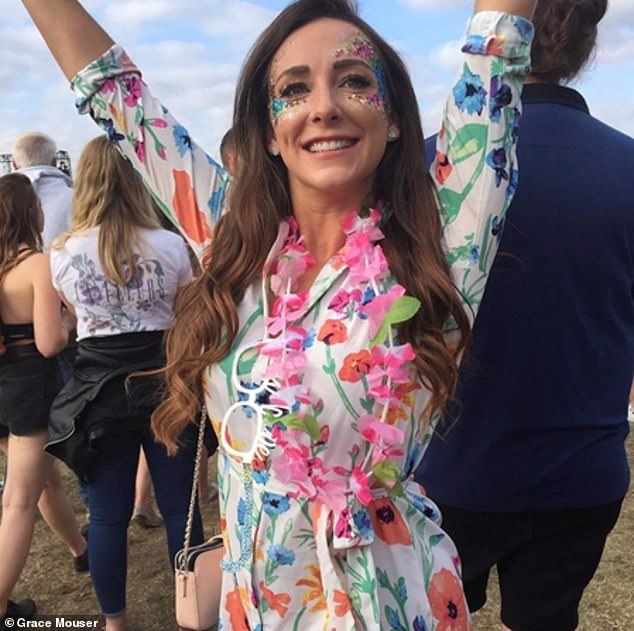 Grace Mouser (pictured), 31, from London, who suffered from hyperhidrosis told how a MiraDry treatment stopped her excessive sweating

Grace who suffered with hyperhidrosis for as long as she can remember, has filled her wardrobe with white clothing since undergoing the treatment.

She said: ‘I can’t remember a time when underarm sweating didn’t affect my life. I would never, ever have worn white because I felt so insecure about my sweat problem. I would sweat through a top a day and was always so self-conscious about the patches under my arms.

‘I have a job as a sales manager and my life is spent running from meeting to meeting and travelling across the UK and abroad.

‘I would have to change my top at least once a day especially when I gave presentations got anxious, the problem got worse, so I wore long sleeves and dark colours to disguise the problem.

‘I wore my trusty black jacket to every meeting to disguise the wet patches. Even on the coldest days of winter, I’d be embarrassed about the wet marks under my arms.

‘I’ve never been able to shake the insecurities that surround my hyperhidrosis, the clinical name for sweating more than necessary to keep your body cool. I got fed up with hiding in long sleeves and black clothes.

‘I wanted to wear whites and pastels and I also felt the problem was holding me back in my career, giving me unnecessary anxiety when I am a confident person.

‘I’d been given prescription-strength antiperspirants by my doctor which didn’t work and I had tried disposable sweat-absorbing pads—like incontinence pads but for your underarms! Horrendous! Nothing helped!

‘Feeling beyond desperate, I got Botox injections, a medically approved hyperhidrosis treatment that temporarily stops your glands from producing sweat. 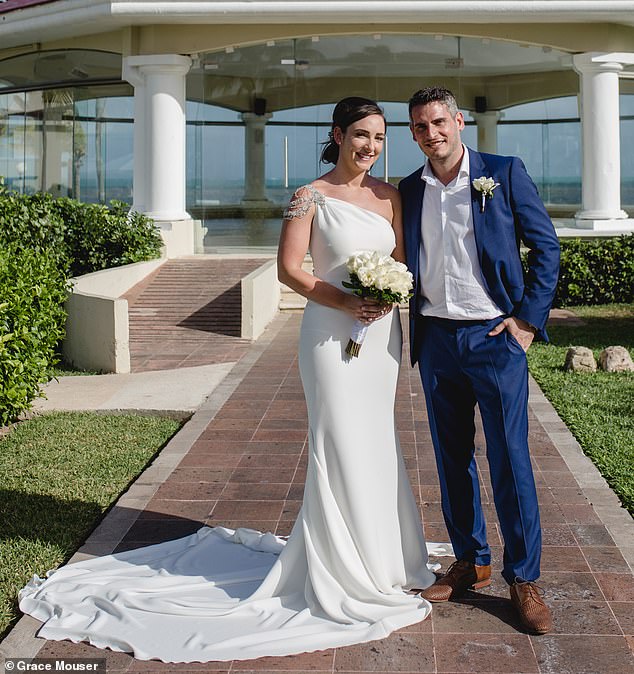 ‘Although it was brilliant, the problem was it only lasted for about six or seven months and its very painful and extremely expensive to keep repeating. I wanted a permanent solution.

‘It all came to a head when I decided to get married in Mexico and I knew that I would not be able to survive the 30C heat and would have to consider the style of dress I was going to wear very carefully to disguise the patches.

‘In fact, I was dreading dress shopping altogether. Also, I did not want to be running off to the bathroom every few minutes to dry my armpits on one of the most important days of my life!

‘I read about a treatment called Miradry, an FDA approved treatment that can dramatically reduce underarm sweat in as little as one appointment with little to no downtime.

‘Rather than masking the symptoms of sweat, like smell and dampness, the treatment directly hits the source using thermal energy, sort of like a microwave delivering heat waves, to destroy the sweat glands which do not grow back. A permanent solution to my problem was like music to my ears!

‘After a thorough consultation at the incredible Karidis Clinic in London I made the choice to go ahead with the treatment. Although I was nervous on the day, I felt really comfortable with my aesthetician which helped so much. 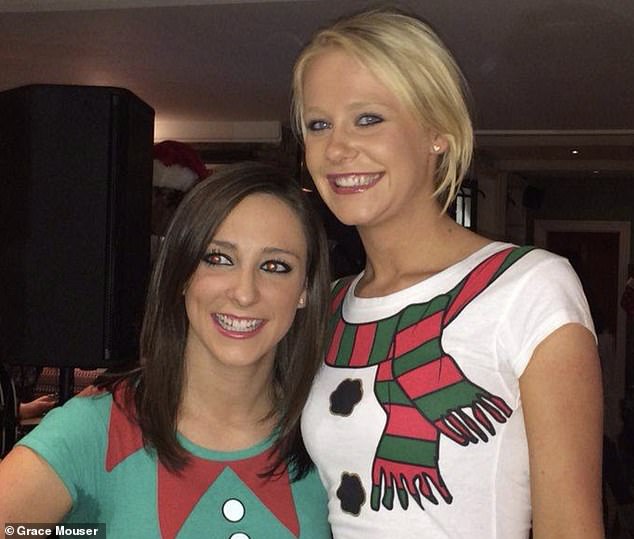 Grace (pictured right) says the £1,395 MiraDry treatment took less than one hour, she had around 10 injections under each arm 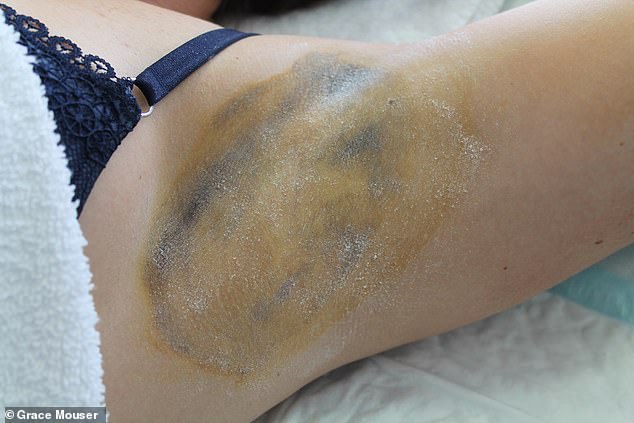 The sales manager revealed the treatment stopped her excessive sweating within two days, but she had to keep reminding herself that side effects such as swelling were temporary

Grace revealed the treatment, which gives permanent results, took less than an hour to complete.

She continued: ‘First, she injected the area with local anaesthetic, about 10 injections under each arm which was the most uncomfortable part of the treatment. Next, she marked the skin with a temporary tattoo used to guide the MiraDry device.

‘The rest of the procedure took about 45 minutes and was much quicker than I expected. During that time the MiraDry device was placed directly on my skin for about 20 minutes on each side. I felt absolutely nothing because MiraDry has an inbuilt cooling system.

‘While I’d read that some people are able to go back to work the day of their procedure, I did experience some swelling in the area for a couple of days post treatment but I kept reminding myself the side effects were temporary.

”The astonishing thing was that within 2 days the treatment started working. I was blown away! The first thing I did was get out all the clothes I had stashed in the back of my wardrobe and started wearing them! My husband could not believe it when he saw me in a white top. I don’t think he had seen me in anything other than black since our wedding day. 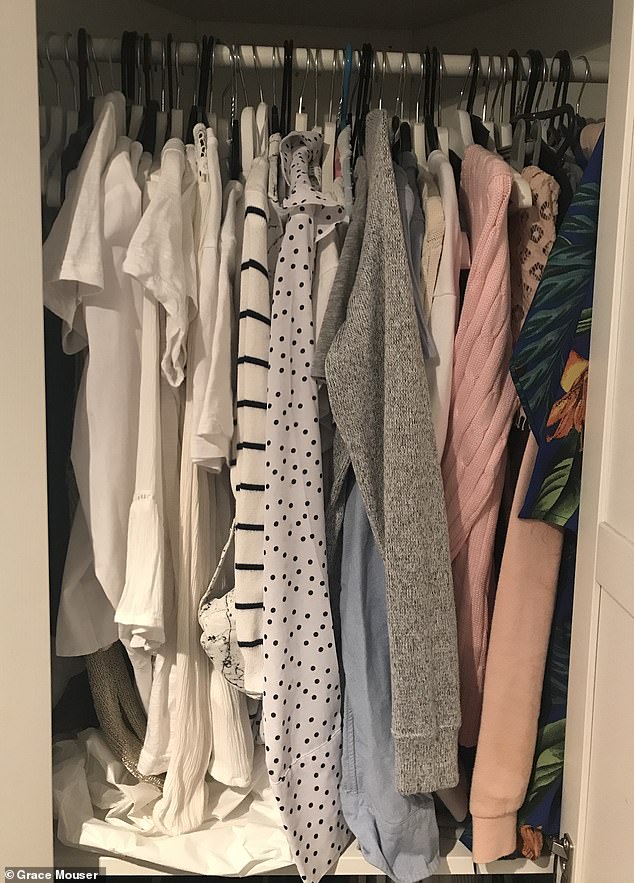 Grace overhauled her wardrobe (pictured) to include white clothes, she says the treatment also means she no longer needs deodorant

‘The sweating has diminished significantly, to the point where I only feel a little bit of wetness on really hot days — and I don’t even need deodorant to fend off the smell, because there isn’t any!

‘Also, a pleasant side effect of the treatment is a massive reduction in underarm hair so I won’t be needing laser hair removal as I barely need to shave! I used to shave about three to four times a week, I only do it once a week now.

‘MiraDry is not cheap, it cost just over £1,500 but it was worth every single penny. Everything that was promised in terms of reduced sweat and odour has been delivered and to say it changed my life is an understatement.

‘In fact, quite soon after the treatment I got a promotion and I feel that because I got over my insecurities, I was able to really fulfill my potential at work, no longer dreading presentations and just taking that unnecessary pressure off myself.

‘My husband also thinks that I have been so much more relaxed since the treatment and he can’t believe how I love dressing up in all styles and colours.

‘Often non-invasive treatments that promise to get rid of a problem permanently do not deliver but this one definitely does. Miradry has honestly been the most life-changing procedure and it really has improved the quality of my life, so much so that a while after working with the team so closely I now work for the company helping other people discover how life changing the treatment actually is.’ 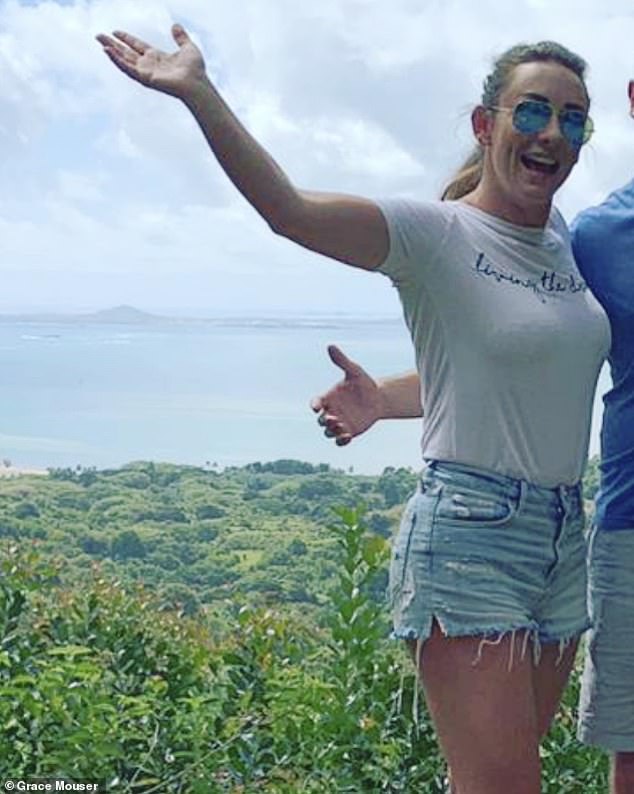 David Greenstein who is a Consultant Vascular Surgeon at Karidis Clinic, revealed that MiraDry has the ability to reduce sweat production by 82 per cent

Consultant Vascular Surgeon at Karidis Clinic Mr David Greenstein, revealed that MiraDry has the ability to reduce the production of sweat by up to 82 per cent.

He said: ‘MiraDry is a very reliable treatment for excessive sweating and is clinically proven to reduce sweat production by 82% with impressive results after just one treatment. Some people will need a follow up treatment.

‘Side effects can include swelling, numbness bruising and sensitivity for a couple of days post treatment. Some patients might experience an altered sensation in the underarm or upper arm skin but this gradually subsides.

‘Some patients worry that the treatment will prevent the body from effectively cooling down but we have between 2-4 million sweat glands in the body and only about 2% are found in the underarms, so after the treatment the rest of the body will continue to sweat normally, meaning it will have no problem cooling itself.

‘The treatment has an optimal safety record and is one of the most permanent sweat solutions available.’

Hyperhidrosis is a common condition in which a person sweats excessively.

The sweating may affect the whole of your body, or it may only affect certain areas.

The sweating doesn’t usually pose a serious threat to your health, but it can be embarrassing and distressing. It can also have a negative impact on your quality of life and may lead to feelings of depression and anxiety.

There are no guidelines to determine what “normal” sweating is, but if you feel you sweat too much and your sweating has started to interfere with your everyday daily life, you may have hyperhidrosis.

What are the signs?

Hyperhidrosis is common. It’s been estimated to affect between 1 and 3 in every 100 people which means there are likely to be hundreds of thousands of people living with it in the UK.

According to Saint Louis University, hyperhidrosis affects a much larger proportion of the US population – an estimated 7.8million individuals, or 2.8 per cent of the population.

Hyperhidrosis can develop at any age, although primary hyperhidrosis typically starts during childhood or soon after puberty.

In many cases, hyperhidrosis has no obvious cause and is thought to be the result of a problem with the part of the nervous system that controls sweating. This is known as primary hyperhidrosis.

Hyperhidrosis that does have an identifiable cause is known as secondary hyperhidrosis. This can have many different triggers, including pregnancy or the menopause, anxiety, certain medications, low blood sugar (hypoglycaemia) an overactive thyroid gland (hyperthyroidism) or infections.

What is the treatment?

Other treatments are iontophoresis (the affected area is treated with a weak electric current passed through water or a wet pad), botulinum toxin injections, and even surgery in a few cases.

Prices from £1,395 at Karidis Clinics www.karidis.co.uk