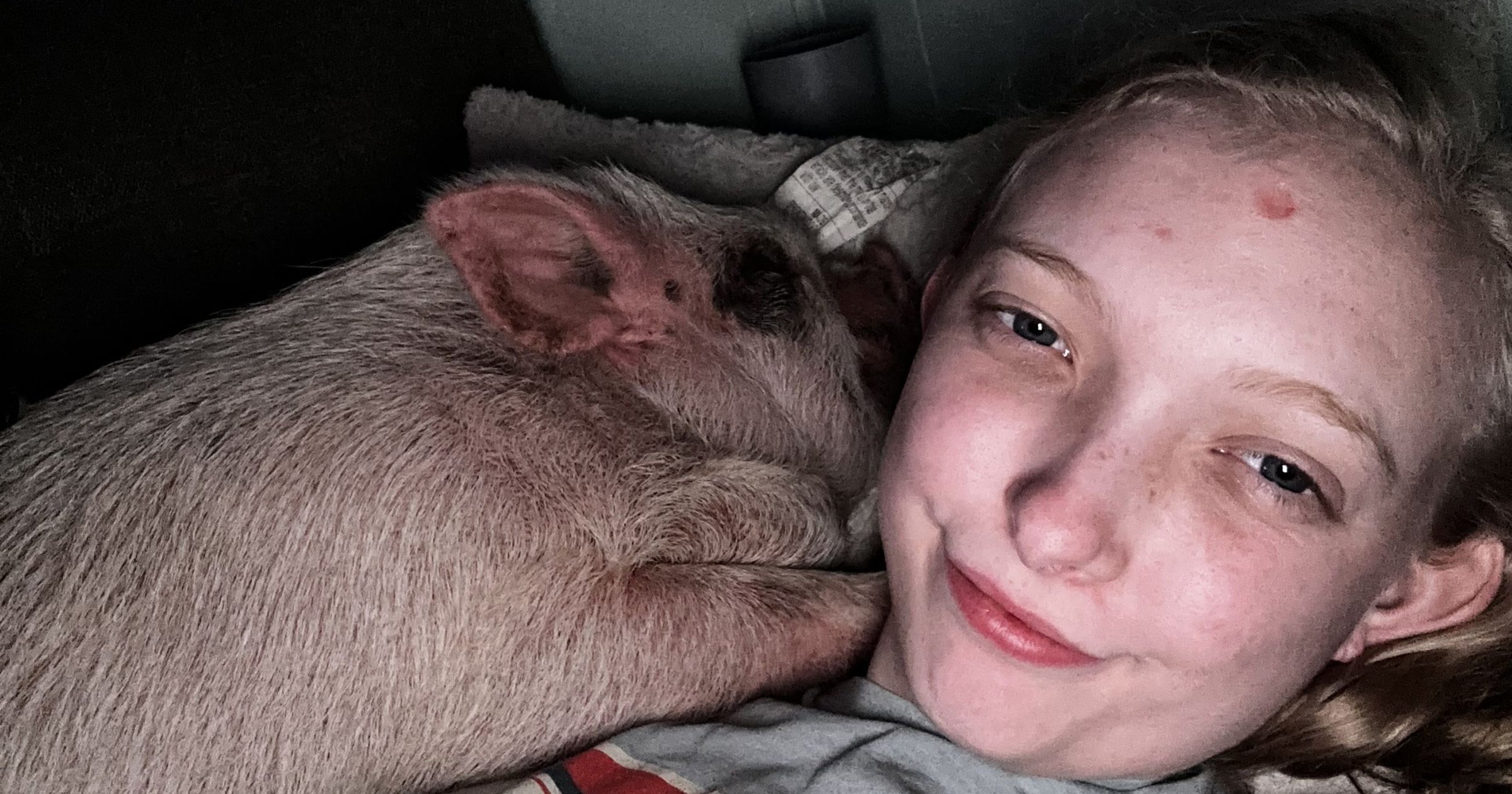 Alexis wanted a pet pig for as long as she could remember. And now that her dream has come true, she spoils kunekune-juliana mix Petunia, who she adopted in April.

The 2st 8lbs pig sleeps next to her owner at night and even has her own room in the three-bedroom house.

The quality controller said she loves snuggling up to Petunia at night even though the pig isn’t a huge fan of baths.

Alexis, from Georgia, US, said: ‘I’m obsessed with her. She sleeps in bed with me a couple of nights a week.

‘I did have to get used to it at first. She likes to steal my pillow and be so close to me that I can’t move, so I have to push her over. She’s a lot warmer than a human body.

‘I don’t like doing it if she’s really dirty, if she’s been digging in the mud. She doesn’t like having a bath, she panics, so I hose her down outside with some soap.

‘People think I’m crazy and especially crazy for having her in my bed.

Alexis got Petunia when she was just a tiny eight-week-old piglet.

Alexis said: ‘I’ve always wanted a pig, I always asked my parents for one because they’re just so cute. When I got her she was adorable.

‘A family friend had a litter and as soon as I held her I knew exactly what her name was.

‘She hasn’t finished growing yet. They grow to three years. I really hope she doesn’t get much bigger – she’s the runt of a runt, so her parents were small.

‘She’s super long. She’s almost up to my knees. Her head is bigger than she was when I got her.’

Petunia is a pretty clever pig – she learned to use the litter box in just two days, and come when she’s called.

Alexis said: ‘They’re very smart animals. She uses her litter box, I had to put her in a tiny space so all she had was a space to eat, a place to sleep and a place to poop.

‘She has her room with a litter box and blankets, and she rolls over and makes herself into a little burrito.

‘She loves to cuddle, she loves acorns and food, and to graze outside. Pigs are nothing like dogs, they’re very difficult.’

Yes, mischievous Petunia can be quite the handful.

‘She’s very noisy, if she’s quiet I know she’s got into something. She’s eaten a bag of pancake mix, some flour, she got stuck in the pantry and ate a whole loaf of bread, and a whole bag of crackers.

‘She’s destroyed the living room, and she tips the trash can over.

‘She spends a lot of time outside grazing and running.

‘She’s quite aggressive sometimes if I do something she doesn’t like but she’s good.

‘If she’s outside and I call her she comes running. If I hold my hand out, she puts her nose on my hand.