A woman who developed painful cystic acne after turning age thirty, despite previously only experiencing occasional breakouts, has told how sharing photos of her skin without editing has boosted her confidence.

Kat Neubrand, 30, from San Jose, California, who had only suffered occasional breakouts in her 20s, believed she was too old for acne when she began to develop the painful condition last summer.

Although her close friends were supportive, she felt depressed and alone and started wearing heavy makeup and using photo editing apps like Facetune before sharing photos online.

After struggling with her self confidence for months, Kat came to the decision to stop hiding away when her acne flared up worse than ever in December 2018.

She vowed to be proud of her skin as well as to stop editing and using filters on her selfies that left her feeling like a ‘catfish’.

The 30-year-old was overwhelmed by the support she received after posting her first unfiltered photo on Instagram, and says the positive reaction boosted her confidence in real life too. 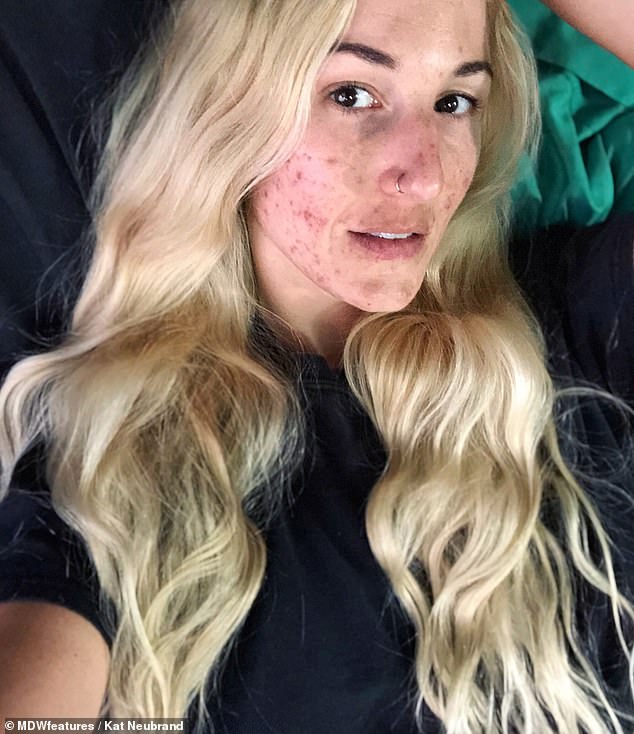 Kat Neubrand (pictured), 30, from San Jose, California, who developed painful cystic acne last summer, has revealed how she learned to embrace her skin 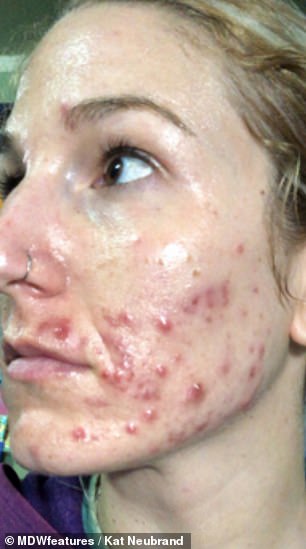 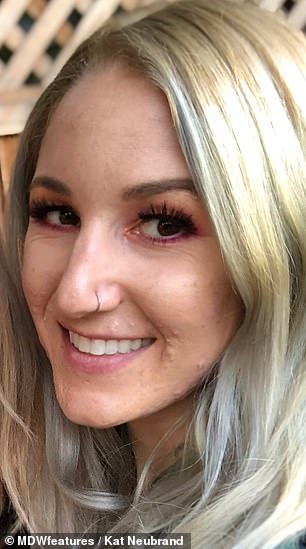 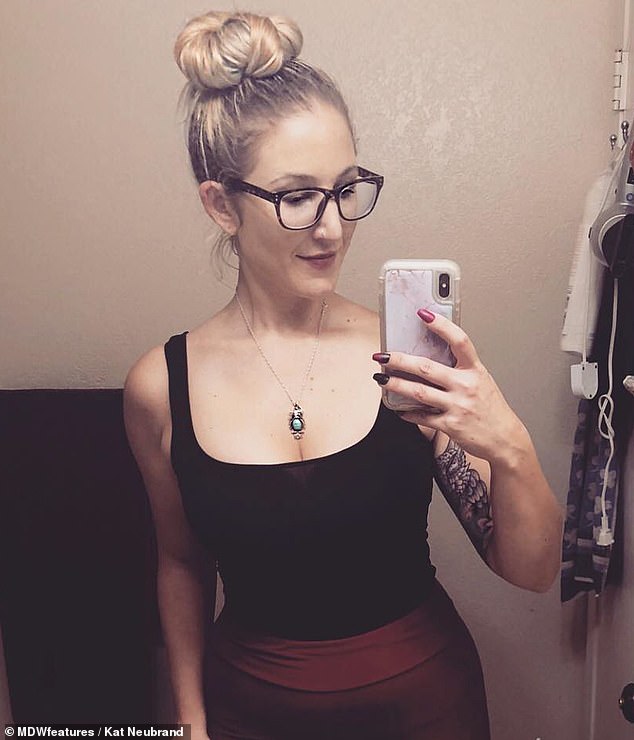 Kat (pictured before her skin broke out) admits she questioned why the skin condition was happening to her, because she’d only suffered occasional breakouts in her 20s

Now Kat is promoting skin positivity and is keen to show people that they are beautiful the way they are and that they don’t need to live up to unrealistic beauty standards set by the media.

Speaking about her skin problems, Kat said: ‘Growing up, I never really had any skin problems besides some breakouts here and there, which started in my early twenties.

‘It wasn’t until I turned 30 that my cystic acne became more severe. I started breaking out more frequently and the breakouts became bigger and more inflamed as time went on.

‘I felt really depressed at first. I asked myself, “why is this happening to me?, aren’t I too old for acne?”. I also felt really alone because none of my friends or family had or have cystic acne. 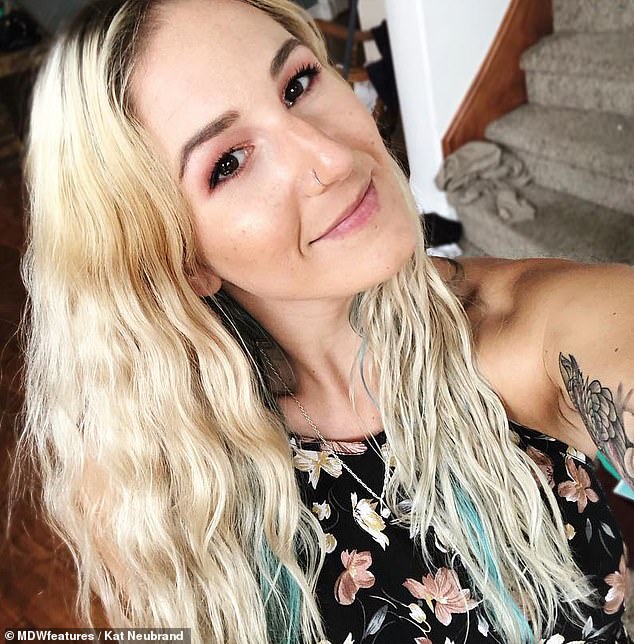 Kat (pictured before her skin broke out) started feeling depressed and alone, even though her close friends were supportive 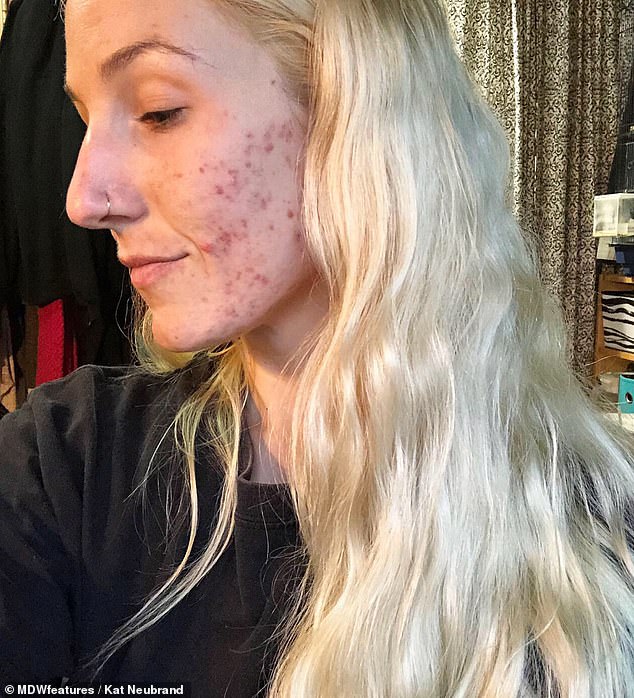 ‘December 2018 was the worst of it all, and that’s when I decided that I need to stop hiding behind filters and Facetune and share my real face and story on Instagram.

‘My acne became so bad that I wasn’t able to hide it anymore, nor did I want to keep editing my photos. I felt like I was being a catfish on social media and I made the decision that enough is enough.

‘It was terrifying, but I received so much support that I knew this was the right thing to do.

‘Ever since then I’ve been posting unedited photos, sharing my struggles with acne, depression and anxiety in hopes that I can help someone else who struggles with those things.

WHAT IS CYSTIC ACNE?

Cystic acne – the most severe form of the skin condition – occurs when oil and dead skin cells build up deep within hair follicles.

If these become infected, it can cause boil-like blemishes.

Spots occur when a pore in the skin gets clogged, usually with dead skin cells. If bacteria enters the pore, it can become red and swollen.

Cystic acne takes place when this infection goes deep into the skin, creating tender bumps that are full of pus.

If the cyst bursts, it can spread the infection, causing more break outs.

Sufferers are usually in their teens or early 20s, but can be as young as eight or as old as 50. Cystic acne is more common in men.

The face, chest, back, upper arms and should are most often affected.

Cystic acne’s exact cause is unclear but is thought to involve the hormones androgen.

Androgen increases during puberty and can result in pores getting clogged.

Over-the-counter medication that can ease milder acne often have no effect on cystic forms.

A dermatologist may prescribe oral antibiotics that control bacteria and lower inflammation.

Creams and gels containing retionoid, a form of vitamin A, can also help to unclog pores.

Birth-control pills may also help women to regulate their hormones.

It is important to seek treatment to prevent scarring.

Acne sufferers should not pick at their blemishes as this may push the infection deeper and make it spread.

Sufferers should also try and relax due to stress causing the body to release more hormones.

‘I received an outpour of support from my friends, as well as so many strangers which I wasn’t expecting.

‘Being able to share that support with others and helping them has been incredibly rewarding. Acne is completely normal and no one should have to feel ashamed for it.

‘Sharing my story on Instagram has helped me in multiple ways. I’m able to speak my truth and I’m no longer hiding my insecurities.

‘It has made me become more confident in real life and I’m just so appreciative of all the people supporting me on this journey. I no longer feel like I’m alone in this.’ 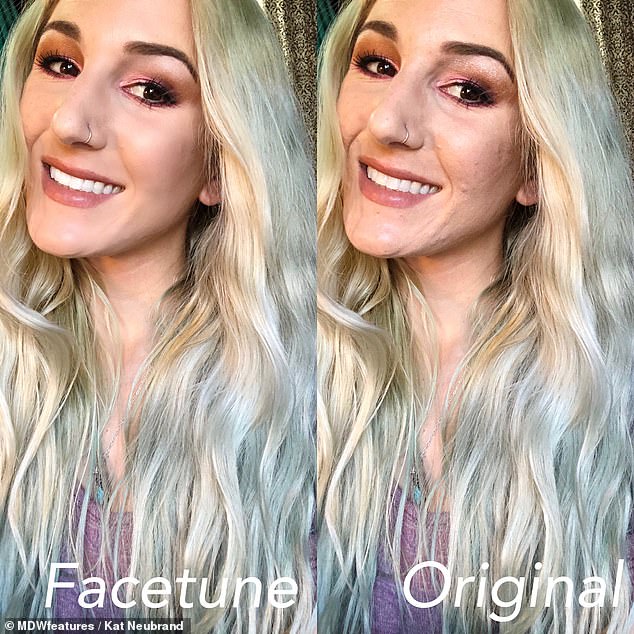 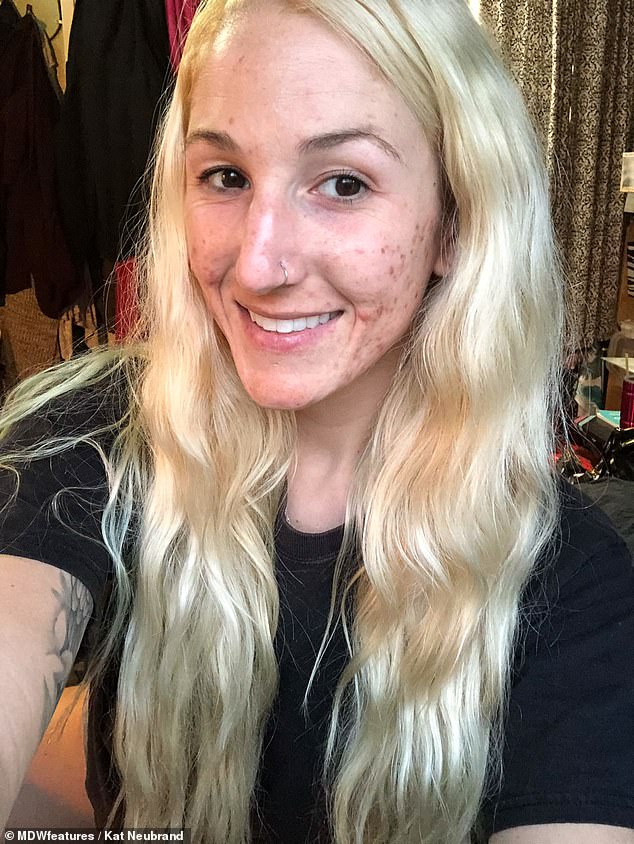 Kat (pictured now) argues acne is normal and no one should have to feel ashamed for it, sharing her experience has helped her to feel less alone

Through sharing her story on Instagram, Kat has learnt to embrace her acne scars which she says she wouldn’t have been able to do had it not been for the messages of support she received.

Kat who has a gentle skincare routine, has been taking Spironolactone since November 2018.

Since having her contraceptive implant, which she has had for two years removed last month, more of her acne has cleared.

No longer ashamed of her skin, Kat wants others who might be in a similar situation as her to feel the same. 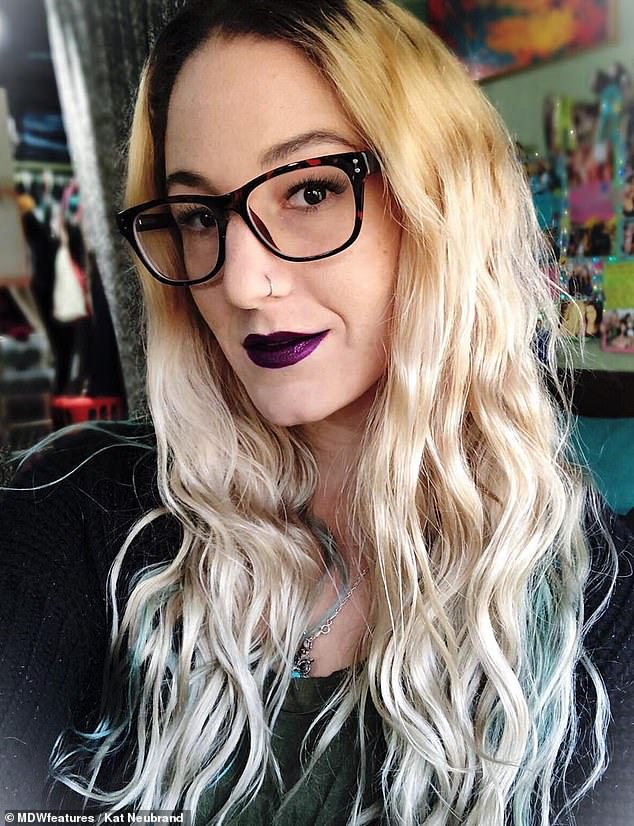 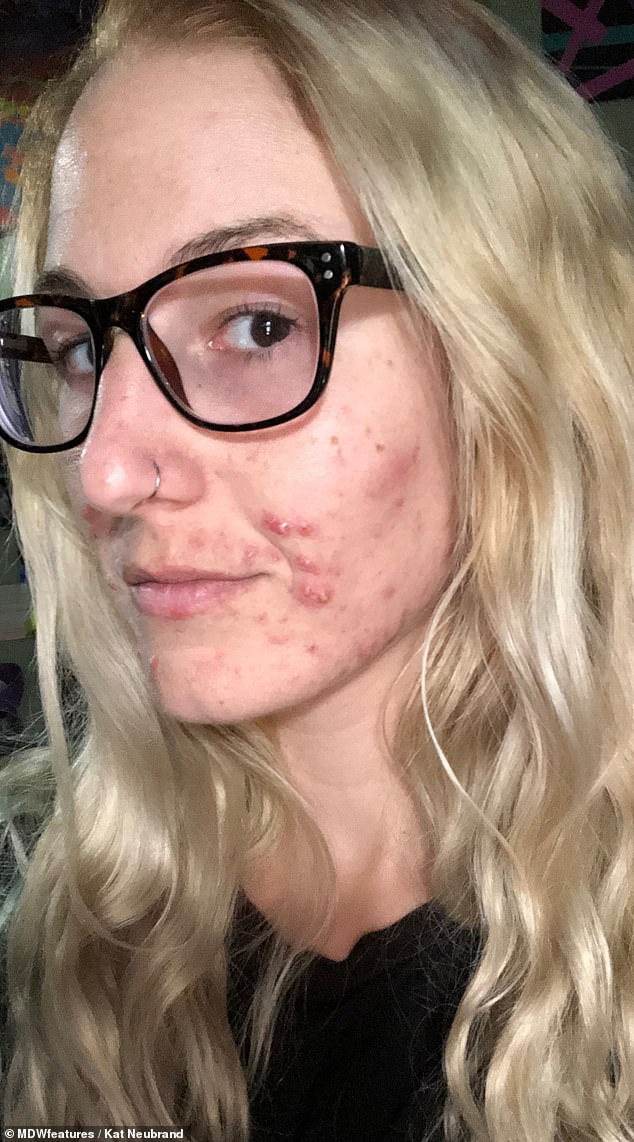 ‘You don’t need filters and photoshop to be beautiful. Just because that’s all we see on TV and in magazines, doesn’t make it realistic. We need to stop chasing unrealistic beauty ideals, just because society thinks they know what is supposed to be beautiful,’ she said.

‘Filters and photoshop only create more insecurities for us. They make us hide behind a mask because we don’t think we fit into society’s beauty mould. Different is beautiful. Your imperfections make you beautiful.

‘I would like to spread the message of skin positivity. I want people to feel confident in their skin, no matter what. I want society to normalise acne and acne scars and stop the photoshop.

‘I want people to see that they don’t need perfect skin to be beautiful and most of all that they are not alone in their struggles. I know it would help tremendously to see models with acne or even actors and actresses with acne on TV and in movies.

‘We are constantly comparing ourselves to others, so I think it’s crucial to have a realistic representation of people with acne or acne scars in the media.’ 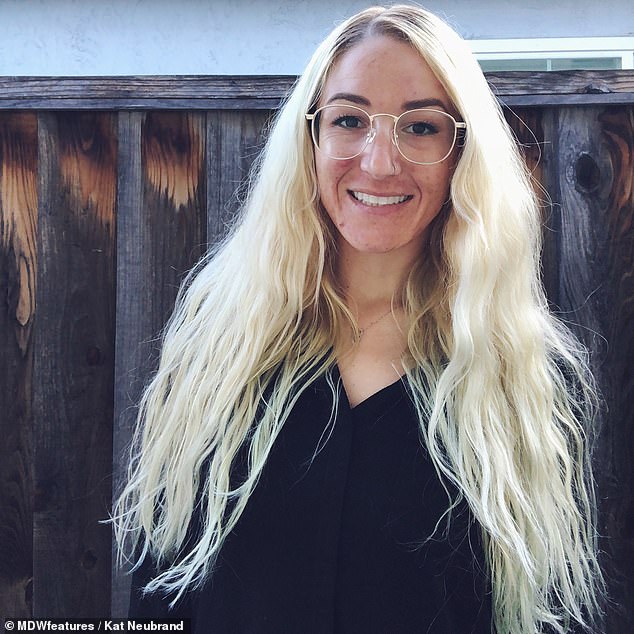 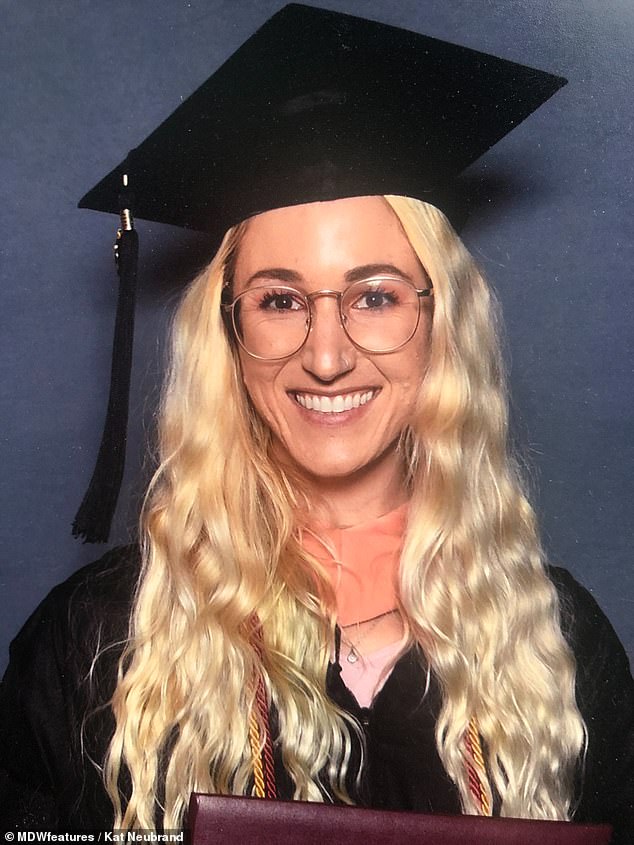 The 30-year-old (pictured embracing her scars) says we are constantly comparing ourselves to others, it’s crucial to have realistic representations