‘This would make me divorce him!’ Woman who thought her husband was filming ‘sentimental footage’ of her during labor discovers he put an ugly DOG FILTER over her face

A mother has revealed that her husband put an ugly animal filter on her face while she was in labor — and posted the hilarious footage online.

TikTok user Sarah Griffith, whose username is @griffithsarah_, had viewers in stitches when she shared the video, which shows her lying in her hospital bed with her entire head covered by Snapchat’s ‘weird dog’ lens.

‘POV: You’re in labor and think your husband is getting sentimental footage for you to look back on,’ she wrote in the on-screen text. 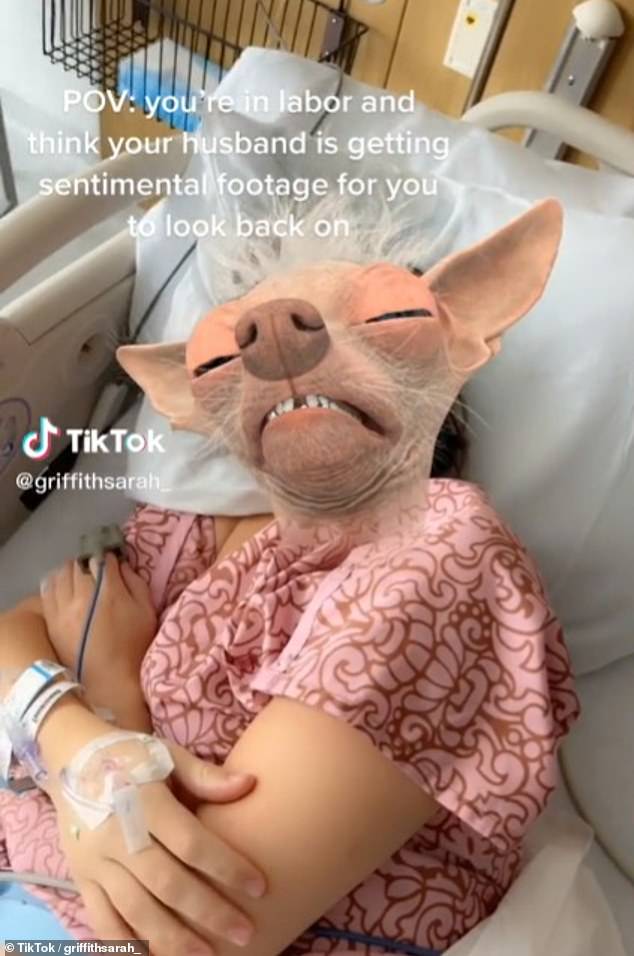 TikTok user Sarah Griffith, whose username is @griffithsarah_ , went viral after revealing her husband put an animal filter over her face while she was in labor 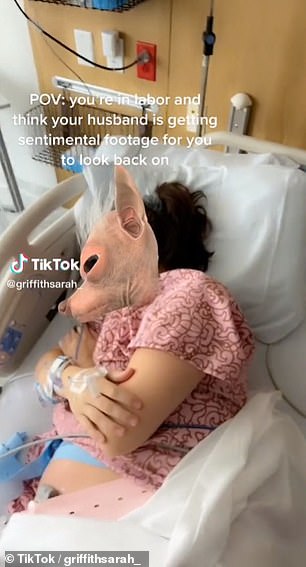 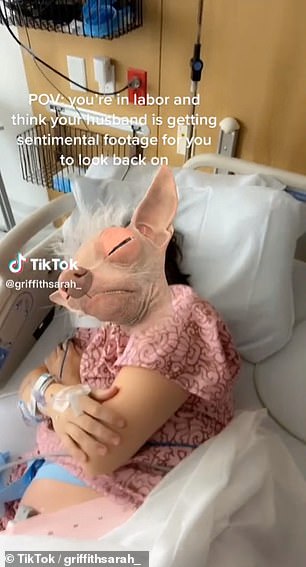 In the clip, Griffith is turned away with her her arms crossed over her chest while her husband tries to get her attention. When she looks toward him and flashes the peace sign, he encourages her.

‘Pretty,’ he jokes, though she thinks he is being serious.

And while some women would be outraged, she was amused by his antics.

‘In his defense, this is our favorite Snapchat filter,’ she shared in the caption.

The video has been viewed more than 1.1 million times and has received hundreds of comments from both fans and critics. 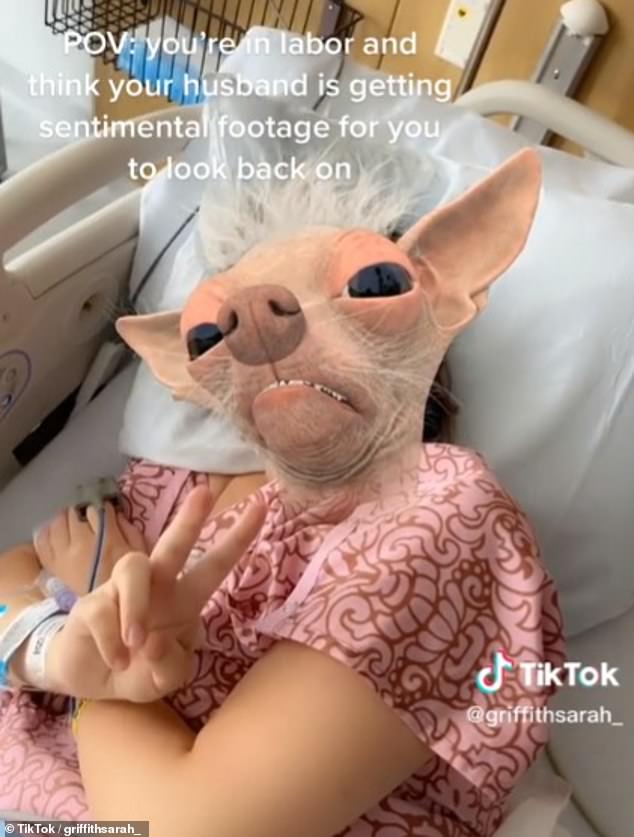 When Griffith flashed her husband he peace sign, he jokingly told her she looked ‘pretty’

The video has been viewed more than 1.1 million times and has received hundreds of comments from both fans and critics

One person couldn’t resist pointing out that she looked like Dobby the Elf from Harry Potter, but Griffith joked he was actually helping her out.

‘I mean I basically looked like this anyway so he was doing [me] a favor,’ she noted.

‘That’s something my man would do…just to make me smile,’ someone else wrote,

Another added, ‘Husband of the year after this.’

‘My husband did the same exact thing when we were out on a date. I thought he was being all cute and he posted it on his story,’ one viewer shared.

However, there were some people who found her husband’s joke distasteful and were concerned she didn’t have any real footage to remember their child’s birth. 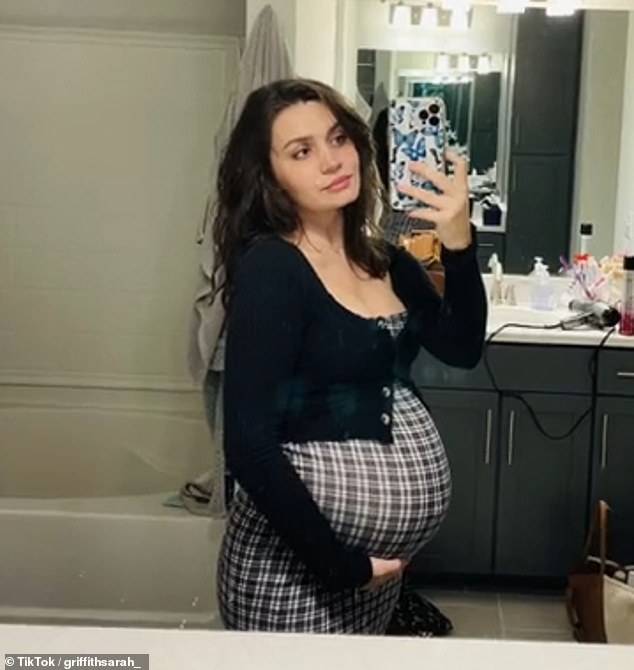 Griffith (pictured pregnant) made it clear in the comments that she was amused by her jokester husband, saying they got plenty of other photos and videos from that day 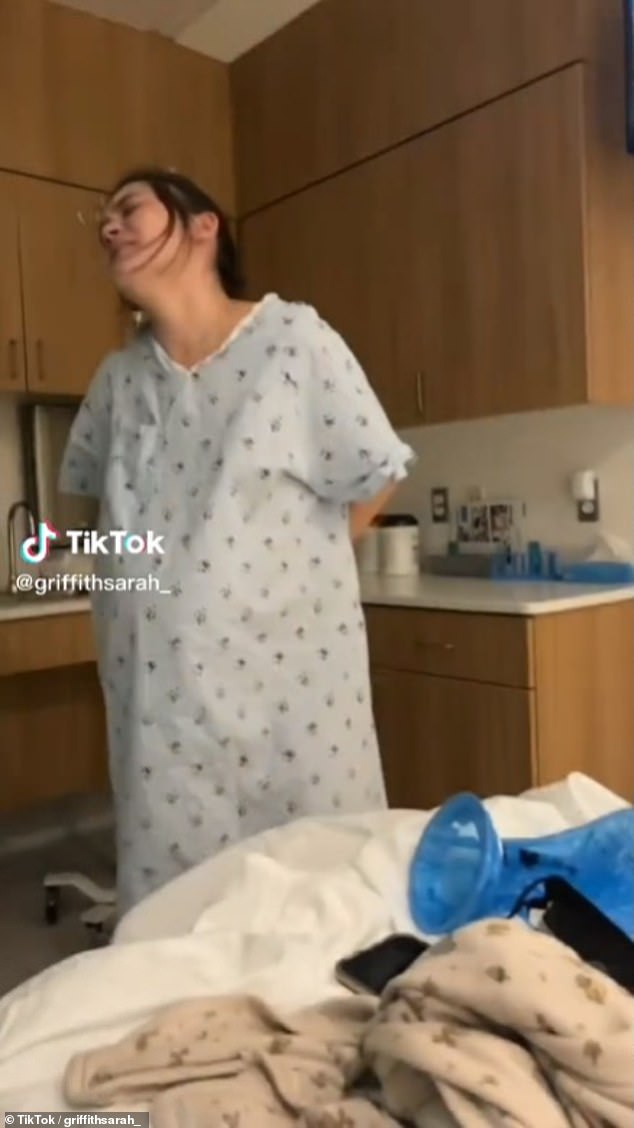 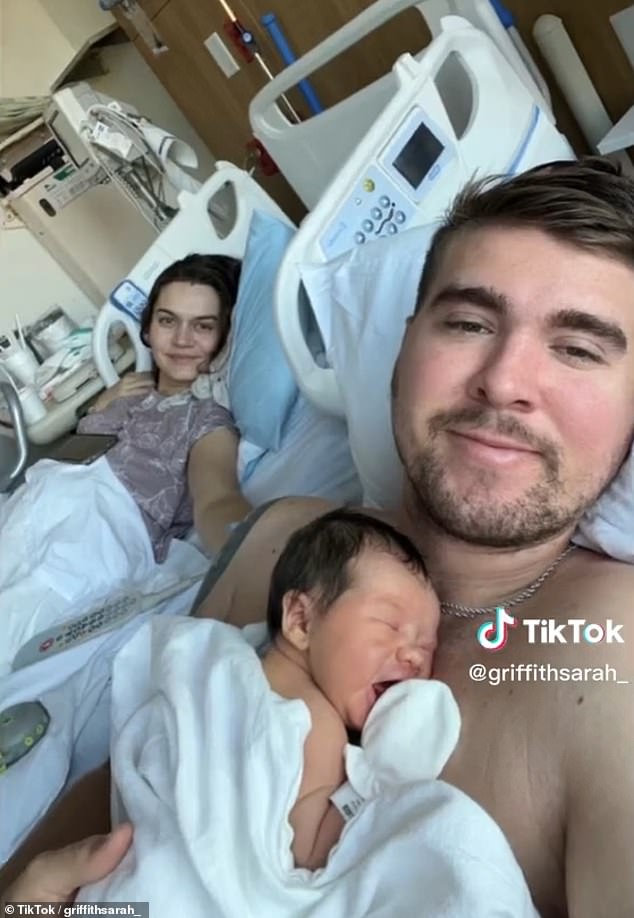 ‘[A] healthy pup was born,’ the new mom (pictured with her husband and child) jokingly added

‘I would be so upset but to each their own,’ one woman admitted.

‘This would make me divorce him,’ someone else agreed.

‘He better have gotten another photo or video. There is no excuse for this. This isn’t f**king funny girls!’ someone else commented. ‘Don’t be [with] men like this.’

‘Men like this keep life fun,’ Griffith responded to commenters. ‘I promise we got lots of other video[s] and pics too so it’s all good!’

‘[A] healthy pup was born,’ she jokingly added.

Griffith later shared a short video of herself in labor sans the filter as proof.