The reviews are in for Olivier Award-winning Irish playwright/director Conor McPherson’s Grammy-nominated and likely 2022 Tony contender, Girl from the North Country, which has been getting standing ovations every night since it re-opened on Broadway.

“Ravishing.” (The New York Times) “Beguiling.” (Rolling Stone) “Impeccable.” (The New Yorker) “The best musical of 2018.” (The Washington Post). Even Bob Dylan loves it. “The play had me crying at the end. I was stunned,” he told the New York Times. And, in a note he sent the cast for its post-COVID reopening in October, he wrote: “To be associated with Conor is one of the highlights of my professional life.” 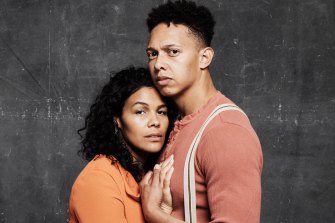 Zahra Newman and Callum Francis star in the Sydney production of the Bob Dylan musical, The Girl from the North Country.Credit:Pierre Toussaint

Not bad for a first attempt at musical theatre. Yet Girl from the North Country might never have been made had McPherson, widely acclaimed as “the finest playwright of his generation”, followed his initial instinct when he was first approached by Dylan’s management.

“I just thought it was really weird, because I had no experience of it, and also because his particular genre of music wasn’t what I thought of as Broadway musical stuff,” he told me, via Zoom recently.

“But I just had this weird idea, which was nothing to do with Bob’s life, so I wrote down about two pages. And we heard back within a couple of days that Bob really liked the idea.” 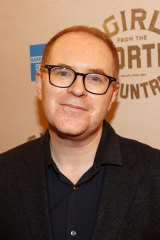 Conor McPherson, who at that point he wrote the Bob Dylan musical, had only seen “maybe two or three” musicals in his entire life.Credit:Getty

It was certainly not your standard musical fare. “I just said that it was set in the 1930s. In a boarding house in Duluth, Minnesota [Dylan’s birthplace]. There was a family at the centre of it. And people were coming and staying that had nowhere to live. I think I said there was a Eugene O’Neill feeling to it and maybe that it had a boxer and a bible salesman, and that the songs would externalise the inner life of the characters as opposed to break the fourth wall, kind of,” says McPherson, who at that point had only seen “maybe two or three” musicals in his entire life.

“And even then, I probably hadn’t sought them out. I probably just ended up at them.” Nor did he rush out to see any. “Just with the true arrogance artists have, I thought, why do I need to see a musical?” he laughs. “But, actually, being stupid and ignorant is usually a little bit helpful, because if you stepped back and analysed what you were doing you wouldn’t do it.”

Billed as “a play with music” rather than a musical, there are no show-stopping belters and no choreographed routines. The only dancing scene has the characters shuffling awkwardly on stage at a party. It’s more like a play by Eugene O’Neill or Arthur Miller (to whom McPherson has been compared) with songs – albeit songs by Bob Dylan, winner of the 2016 Nobel Prize in Literature.

“Yes, I felt a big sense of responsibility collaborating with someone who is such an undeniable cultural icon,” says the 50-year-old who, although he didn’t grow up in the 60s, was a huge fan of its music and was “totally aware” of Dylan as a child. “But it felt sort of surreal, almost as though it couldn’t really be happening, so in a sense that helped.”

It also helped that he is very musical.

“I’d always loved music. I played music and I am a huge music fan. So that side of it was natural, and when they said, ‘You can use any song and do what you want,’ I thought, ‘Oh, I’ll probably be able to try something now,’ because I could just enjoy the music as well as put the thing together.”

“I was very surprised to hear this was going to be a musical,” says Mary Ann McSweeney, who plays bass in the show.

“I was never a fan of Bob Dylan. But I am now. It’s about his lyrics and the meaning they bring, especially in these times.” Despite its Depression-era setting, as the London Telegraph pointed out in a 2018 review, Girl from the North Country manages to feel “both part of a particular moment in American history and of today”. This feeling is even more pronounced post-2020 when, following the police killings of Breonna Taylor and George Floyd (according to CBS News, just two of the 164 known cases of black people killed by US police in the first eight months of 2020), the entire world erupted in protests at the kinds of civil rights abuses that Dylan has been singing about since the ’60s.

“Pre-2020, from my perspective of being a white, middle-aged, middle-class man, I wouldn’t have felt that there were issues in our midst,” says McPherson.

“But then, the show was closed [in March 2020] because of COVID and, of course, everything that was happening in America before we reconvened had a huge impact on our production. Everybody started to talk about this stuff in a different way. This is real. It’s happening. It hasn’t gone away. And the conversation became – as it did everywhere – very alive in our group.” 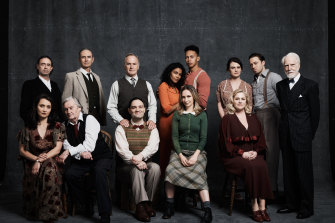 The Sydney cast of Girl from the North Country. Credit:Pierre Toussaint

As a result of the greater awareness resulting from the Black Lives Matter movement, the production (along with most of Broadway) held Diversity, Equity, Inclusion, and Belonging (DEIB) workshops.

“And, to everyone’s credit, everybody was very keen to explore how we all felt and to listen, including one particularly moving session where we all sat together and spoke about things we’d never spoken about,” says McPherson. “Because the thing about this show is, it touches on a lot of things that human beings struggle with and, as a practitioner, you can become almost inured to things and you don’t stop to think, ‘Well, what is this doing to everybody?’”

The play’s albeit brief reference to the real-life lynching, watched by 5000 in Duluth in 1920, of three African American circus workers, Elmer Jackson, Elias Clayton and Isaac McGhie (which McPherson troubles to name), is a case in point.

“When I decided to set it in Duluth, I didn’t know anything about Duluth and just finding out about it, I was ‘Oh my God!’ I also realised that Bob Dylan refers to it in Desolation Row where he says they’re selling postcards of the hanging, and they did. When I realised that, I thought we can’t set the story here and not have it. I mean you could nearly make the play just about that. But the African American actors we had in the American production didn’t know about it at all. And it became a journey of discovery for them. It was pretty heavy.”

But, although Girl from the North Country acknowledges civil rights issues, this is not a play about civil rights, although it embodies them to an extent, in the multi-racial casting of the play – a fabulous subversion of real life 1930s Duluth – which, once you settle into the suspension of disbelief, is exhilarating. It’s reminiscent of the alternate reality in the Netflix romp, Bridgerton, where Regency-era kings and queens, dukes and ladies (and, perhaps more to the point, actors in non-peripheral roles) are black as well as white.

“Originally, the racial dynamic was that it was a white family whose daughter had this friendship with a guy in the boarding house who was black. But when we were casting in London, the Old Vic asked if I’d be open to seeing everybody for every part regardless of colour and I said yes,” says McPherson.

“Then we saw [Ugandan actress] Sheila Atim for the role of Marianne, and she was just so great I said ‘Well, we just need to cast her!’ And it was like, how? And I thought [she could be a foundling that] someone left in the guest house in a bag. So it changed the story. It made it better. Stronger.”

Atim won a Laurence Olivier Award for the role. “I will always try to wrap the work around the best talent, because what you want is the best talent on stage,” says McPherson, who is looking forward to the Australian production, which will star Lisa McCune, Callum Francis, Elizabeth Hay, Peter Kowitz and Zahra Newman. This production will be different.

“Because this cast is different … [and] I like to very quickly lean into what the particular performers are doing and get inspired by who they are,” he says. “You’d be nuts to doggedly stick to some idea that you had if they’re going to do something more interesting.”

It’s a very open way of working. “The process of doing Girl from the North Country was a bit like writing a song in the sense that often you’re not even sure until the thing is finished what you were doing. You’re not tied to any particular thing that you’re trying to do. You just do it and then you go ‘Oh look at that!’” he says. 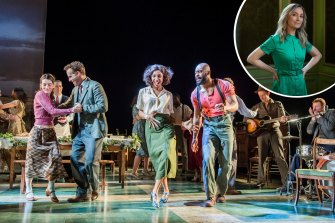 “And it’s also a bit like how Bob Dylan songs work. They’re sort of, ‘What are they about?’ He just leaves it up to you. In that way they are a great gift because they allow so much space, so every single person in the audience can probably see a little different picture in their head, and it’s all valid,” says McPherson, who listened to 40 of Dylan’s albums to prepare.

Simon Hale, the play’s orchestrator, arranger and musical supervisor, agrees. “[It’s] different to a musical, where the lyrics are directly related to the narrative or characterisation. As a result, the music comes at the audience from a different angle and in a more abstract way.”

The play’s title, for example (from the song, Girl from the North Country, which is heard only briefly from “out in the kitchen”), feels like an unsung theme song, evoking the vastness of the American landscape and the transience of its people. Snippets and fragments of songs run into each other or are heard in the background, seeming to offer glimpses into the play’s subconscious. “It’s certainly what Conor planned,” says Hale. “The over-arching voice of Bob is always there as a powerful emotional presence.” 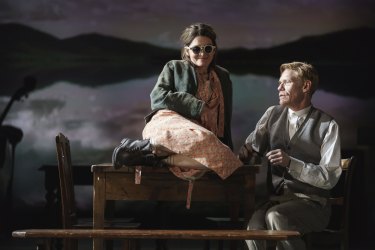 A scene from the Broadway production of Girl from the North Country. Credit:Manuel Harlan.

It permeates the whole play. Nick takes care of his dementia-addled wife, Elizabeth, while also having an affair with Mrs Nielsen.

The failed-to-launch writer son is a drunk whose girl leaves him for a man with better prospects. The daughter is pregnant by who knows who. Joe Scott, the black boxer, has just got out of prison for a crime he didn’t commit (he sings Hurricane). Yet there is hope and love and movement.

“I think you have to have light and shade. If it’s all just the one thing, it’s going to be very bland,” says McPherson. “As I always say to the performers, the music is the honey and we have to be the vinegar! We have to allow ourselves to be unlikeable and to see the failures that people have, because music forgives us and redeems us. Music is like the holy balm that is making it all okay. I mean it’s just such a mysterious power, isn’t it. It’s amazing, it really is.”

Girl from the North Country runs from January 5 until February 27 at the Theatre Royal.

A cultural guide to going out and loving your city. Sign up to our Culture Fix newsletter here.