John Rutter is a most unlikely superstar. Balding, bespectacled and with a penchant for sensible tank tops, he could easily pass as the rector of a minor Cotswolds parish.

But in the world of classical composition, particularly sacred choral music, there is no figure more significant than Rutter, who has been described as "the world's greatest living composer”.

While known primarily for his Christmas carols, he is hugely prolific and has written many longer works, including a regularly performed Requiem that features an exquisite Pie Jesu. 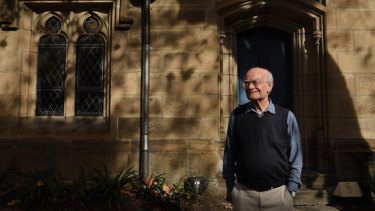 Much of John Rutter’s music has become synonymous with Christmas.Credit:Kate Geraghty

He is also in demand internationally as a conductor, particularly in the US where he has a significant profile, and was recently voted 68th all-time favourite composer by listeners of ABC Classic FM, pipping luminaries including Anton Bruckner and Arthur Sullivan.

Put all this to him, however, and he seems a little uncomfortable, radiating a particularly English aura of self-deprecation.

“None of us knows why the music we write touches people’s hearts,” he says. “I think once it does it probably stays there. Maybe it’s a cumulative thing, if you stick around long enough. It’s like throwing burs at people. Eventually, some will stick.”

Rutter has certainly been lobbing those burs for some time. Now 73, he first found success aged 18 at King’s College, Cambridge, where he studied under the late David Willcocks, the legendary director of the college choir.

“One week he said, ‘Mr Rutter, I understand that you have been composing?’. He made it sound like a terrible, secret vice.

“Then he said, ‘Would you present yourself to my rooms at nine o’clock on Monday morning with some of your manuscripts. I’d like to look at some of your work'.”

Willcocks was impressed and in his capacity as an editorial adviser to Oxford University Press, offered to publish some of the work – a huge break for such a young musician.

“Thanks to him I made the leap from being an aspiring composer to a published composer,” says Rutter.

Among the manuscripts the young Rutter presented with trembling hands was what was to become one of his most enduring and popular carols – the Shepherd’s Pipe Carol.

“I never thought the shepherd would be still be piping away all those years after I wrote it,” says Rutter.

“Why I started writing Christmas carols, I still don’t really quite know, but once I started it seemed difficult to stop and I’ve done quite a few in the years since then.”

Rutter is in good company. British composers including Vaughan-Williams and Britten have all been drawn to what Rutter describes as a “little form of folk art”.

“You can kind of divide composers into ‘caroly’ ones and ‘non-caroly’ ones,” he says. “Elgar wasn’t caroly.

“But it’s a tradition that continues. I feel like I’m adding one more tile to the mosaic of Christmas music.”

Rutter also has a more tongue-in-cheek reason for his focus on Christmas music.

“One of the things I liked about it was that music critics go on vacation. So you were kind of free to just have a little bit of fun and write something like the Shepherd's Pipe Carol  with the hope it would entertain people for three minutes. And a lofty critic wasn't going to lob mud because they wouldn't be there.”

And while Rutter’s lifelong oeuvre has been sacred music, he is no religious zealot.

“It depends what you mean by religious,” he says. “I mean, I was baptised in the dear old Church of England, which was kind of the default position when I was growing up and I would be lost without it in that the framework of the C of E is very important to me.

“When I set a religious text I am profoundly religious at that moment because if you are going to set a text you have to enter into it. [But] am I in church every single Sunday on my knees. Well, no.”