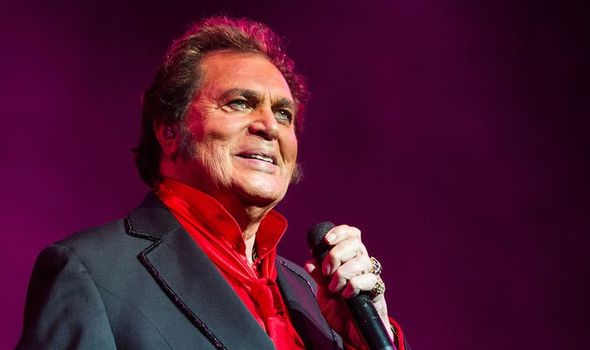 “I made a joke,” he chuckles, “but it was horrible. They arrested my whole band at the airport, pushed them into three cars and left me standing on the kerb. They had to stop and come back for me. It was like dealing with the Keystone Cops.

“It was the only time I ever got arrested. I was stopped at the airport by Interpol, they took me to an office at gunpoint and this policeman sat at a table with his gun pointing at me. He told me in Spanish to open my medical case; then he started taking things out of it.

“I had every kind of medication, stomach pills, headache pills, antibiotics, tubes you break to revive you if you faint. He broke one, smelt it and said ‘Jesus Christ!’

“I said, ‘Oh, you do speak English.’ Then he pointed the gun at me and took me downtown and put me in a cell. This was in the 70s and the press were there in buckets.

“I was behind bars for a few hours while my pills were analysed. Of course, there was nothing illegal there. They didn’t even apologise. We got the first plane back to LA. We were in Venezuela for nineteen hours.”

Engelbert, 85, had only gone there because foreign musicians couldn’t work in the USA then for more than 180 days at a time. “This had been a holiday,” he says, still astounded. “After that we went to Mexico instead. But I have been back since and met the man who arrested me. I told him, ‘No guns please! You’re not going to arrest me on this tour’.”

He laughs loudly down the phone from Los Angeles; maybe he needs to. It’s been a difficult year. Engelbert – born plain Arnold Dorsey – lost his beloved wife Patricia in February.

“It’s not been a very pleasant time,” he says, his voice growing softer. “My darling wife passed away, she got the virus and it left her with other problems, it affected her heart and she suffered a cardiac arrest.”

He’s coping he says “by just singing, “cos that’s what she’d want me to do.”

Engelbert, who endured long Covid himself, starts a US tour on Friday [Oct 1st], and kicks off his 14-date UK tour on 31st October. “It’s the first time I’ve done so many shows in the UK for years,” he says. “I’m just doing a YouTube special to show people I’ve still got my voice and I’m still doing my thing.”

Voice, yes; hearing not so much. We spend a comical 20 minutes not hearing each other over an array of phones at the start of our chat. “Bad sound has damaged my ears,” he says. “I have Bluetooth monitors in them on stage so I hear the band perfectly.”

He’s looking forward to playing the Palladium next April. “It’s where it all began for me, early in 1967,” he recalls wistfully. “I’d just released Release Me but it wasn’t selling. Then Dickie Valentine was taken ill so I took his slot on Sunday Night At The London Palladium…”

He sang Release Me and the single shot to Number One, stayed there for six weeks and sold 1.38million copies, stopping The Beatles’ Penny Lane from reaching Number One.

I first saw Engelbert perform it live at Bally’s, Las Vegas, in 1995. He was sixty then but women were still throwing underwear and room keys at him. He whisked one swooning thirty-something lady on stage and asked “Is your husband here?”

She said “Yes,” adding in a whisper “But I’ll be coming to see you in Denver without him…”

Female fans have been offering themselves to the Hump for decades. He is said to have had more paternity suits than stage suits and once joked “I see a fan’s child and my first thought is, does that child look like me?”

Back then he told me “In this business you’re open to all manner of temptations. You have to accept that mistakes come, and go past them.”

He called wife Pat “a remarkable lady who “has tolerated me”. She was 16 when they met; he was 27 and a struggling dance band singer calling himself Gerry Dorsey. Born in Madras, India, on May 2 1936, he was the son of a British Army engineer, the ninth of ten children, and brought up Catholic – he still has faith.

The family moved to Leicester when he was eleven. At 15 he started working in an engineering factory. He did his National Service in Mulheim, Germany, and after being demobbed, started singing in clubs, making his stage debut at Bond Street Working Men’s Club, Leicester, in 1957.

“I wanted to make it, that was my dream,” he says. “To be somebody.” It took a while. Dorsey performed for £20-a-night and half-starved for years. He waited seven years before marrying Pat. “I wanted to be able to afford to keep her.”

Their first home was a council flat in Hammersmith, West London, where they got by on two meals a day – porridge for breakfast, mincemeat and mash for tea. “It had no curtains, no carpets, no light shades, nothing…except love.” And eventually four children.

Showbiz manager Gordon Mills signed him up and renamed him after the 19th century German composer of children’s opera Hansel & Gretel. Comedians loved it. They called him “Pumper Nickel”, “Thumper Dick”, “Dumper Truck”, “Hump the Chump”…but nobody forgot that name.

He left Mills in 1976, losing everything he had getting out of the contract. Now Engelbert has an eight-bedroom mansion in LA, and an 1856-built Leicestershire estate with tennis courts, a putting green and its own pub.

“It was a little cottage they used for cleaning brasses,” he says. “I turned it into an English pub with a beer on tap, a sitting room, a room upstairs for meals, and the dartboard. I call it the Duchess of Hamilton in honour of the woman the house was built for.

“All the top dart-players came there and I beat them all. Eric Bristow, God rest his soul, I beat him but he came back with a TV crew and he beat the living daylights out of me – and had it on film! I loved Eric.”

He misses British comedy in LA but watches Seinfeld repeats to cheer him up at night before he sleeps.

During his many Vegas residences, the Hump befriended Dean Martin, Sammy Davis Jnr and his idol Elvis but recalls “Sinatra wasn’t that friendly to me, he didn’t show much affection to people with big voices. He was a great artist, though, I respected him and played his golf tournament.”

He did his own 2018 TV special from Hawaii because Elvis had done one there.

Now he says “I’m thinking of recording a country album, with new numbers and maybe a couple of covers. I’m still here, making a good living. I’m back on my feet. I’ll keep doing it until God calls me.”