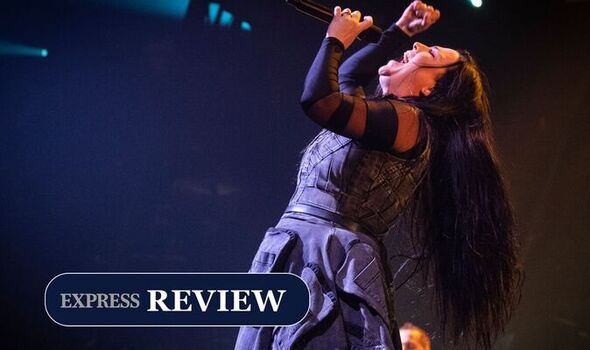 After years of delays caused by the pandemic, Evanescence finally hit London’s gigantic O2 Arena on November 14, 2022. The crowd’s tension was palpable during the run-up to the band’s arrival, and they didn’t disappoint as they launched onto Broken Pieces Shine – one of their standout hits from their most recent album, The Bitter Truth – but pieces of the performance felt a little deflated after that.

I’ve been longing to see Evanescence for decades, at this point. Who among us wasn’t obsessed with the American band as a teenager? Finally seeing them is made more exciting by the fact that Evanescence are one of the few bands that has grown up, changed, and improved as the years have gone on.

And a lot of that power was in the band’s live performance this week. Their musical and technical creativity was plain to see – pioneered by singer Amy Lee. The Californian has, without doubt, one of the best voices in music. There are top-ten pop artists who could never hold a candle to the skill, tone, and nuances that she flaunts with ease. Despite trilling through a 15+ song set list, I don’t believe she faltered once.

Likewise, her band – Tim McCord, Will Hunt, Troy McLawhorn and Emma Anzai – produced intense performances. From the earth-shattering chugs of Going Under to the meandering intricacies of Better Without You, Evanescence seemed to improve on their recorded presence with gusto and ingenuity. So, too, were the elegant lyrical and songwriting idiosyncrasies felt in the more delicate songs, such as the melodious Your Star.

Unfortunately, for me, Evanescence struggled to wrangle the reins of The O2.

While Amy’s voice was – again! – just unbelievable, the band as a whole did not deliver a meaningful performance. The guitarists were, more or less, brooding and statuesque throughout the set’s more exciting moments. Amy ushered Evanescence fans through awe-inducing moments, but during fleeting instances of her needing to catch her breath or take a sip of water, the stage felt dormant. Stagnant, even. And that feeling was reflected in the crowd, who had previously exploded with energy during the earlier acts but seemed to collapse halfway through Evanescence’s set.

Now, I’m not saying that every large venue begets an enormous, flashy, over-the-top production value to spice things up, but – in this instance – it certainly wouldn’t have gone amiss.

There were moments of pure joy, however. Examples of true greatness that few other bands could meet. My Immortal was a gorgeous, heart-wrenching experience that, if bottled, would have people in the street crying at every turn. And, of course, Bring Me To Life will forever be a transcendent fever dream that unites every listener under one desire: To put Evanescence on repeat forevermore.

Evanescence are on tour in the UK now.