Whatever legendary performer Gladys Knight is taking — fans want in. “The Empress of Soul” … or should we say style, looked as youthful as ever at the CMT Music Awards in Nashville on June 9. Knight stepped onto the red carpet at Bridgestone Arena wearing a gorgeous knee-length white dress with long patterned sheer sleeves, per Daily Mail. Reinforcing the notion that less is more, she paired the frock with simple stylish white stilettos, shimmery makeup, and perfectly coiffed hair. But the angelic number wasn’t the only look Knight showed off during the evening. The 77-year-old crossed over to the dark side for her CMT performance, as she donned a glamorous and glittery black strapless gown with a sweetheart neckline, which she matched with black pumps, per ET.

The seven-time Grammy Award-winner performed alongside first-time CMT nominee, Mickey Guyton, nominated for Female Video of the Year, Breakthrough Video of the Year, and Video of the Year. The pair performed a powerful rendition of Knight’s iconic 1970s-era song, “Friendship Train,” about love and unity among all people. R&B performer Breland also joined in on the uptempo classic, bringing the audience to their feet and seeing the trio eventually receive a very deserving standing ovation, per CMT.

Want to see the look for yourself? Keep on scrolling for the reveal, as well as what fans had to say about the ensemble.

Fans say Gladys Knight looks younger than they do 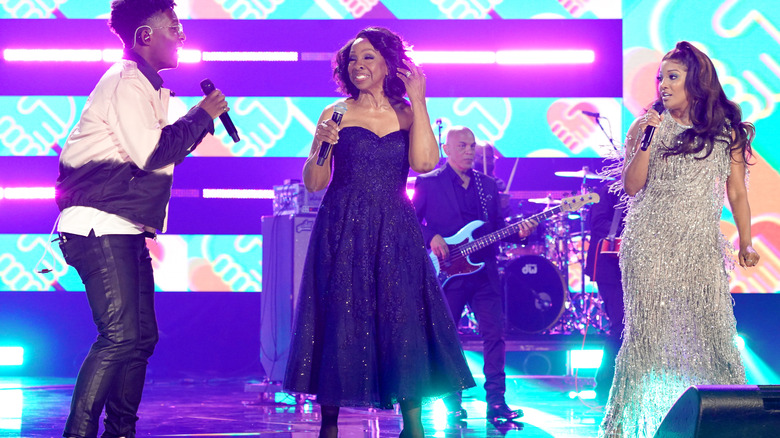 Gladys Knight may have been inducted into the Rock and Roll Hall of Fame back in 1996, but fans seem to think she deserves another accolade — in the style stakes that is. Since launching her career in the 1950s with her group The Pips, Knight has recorded over 40 albums and a plethora of number one hits including “Midnight Train to Georgia” and “Help me Make it Through the Night” to the James Bond theme, “Licence to Kill.” But aside from providing us with some iconic funky tunes, Knight has also served some stylish looks over the years — which according to fans on Twitter hasn’t stopped at her ripe age of 77.

One fan jokingly wrote, “Gladys Knight looks better at 77 than I do at 39,” while another said, “GLADYS KNIGHT!? LETS GOOOOOO. LETS ALL THE WAY FREAKING GO.” Others seemed to also refer to her enduring singing and performance skills, as she continues to belt out the hits more than 50 years after starting out. Another penned, “Wow, Gladys Knight is still killing it,” and another gushed, “Gladys Knight still got it. So soulful.”

On June 6, the star even honored Garth Brooks during the 43rd Kennedy Center Honors by delivering a performance of his 1992 tune, “We Shall be Free,” (per Music Mayhem) and recently announced a 2022 British tour — proving Knight won’t be letting go of the title of “Empress of Soul” anytime soon.