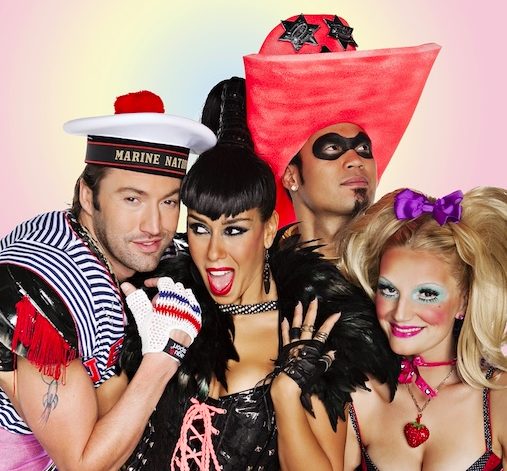 ‘We were told it was never going to happen for us, but we’ve been on a non-stop tour,’ says Robin Pors of the Vengaboys, as the Euro-pop titans prepare to release their first single in 15 years – over two decades since their first number one in the UK.

Throughout the noughties, it was hard to escape hits like Boom, Boom, Boom and We Like To Party. But still, the Vengabus is still going and clubbers heading to Ibiza would be challenged to travel there without Vengaboys’ celebration of the island ringing through their ears on the Easyjet flight over.

In 2021, there’s still room for Vengaboys, proven by their new track 1999 (I Wanna Go Back), a cover of contemporary rebels of pop Charli XCX and Troye Sivan’s bop with that Venga stamp, throwing it back to what really was a golden age of pop culture, of which the Dutch group was very much at the core.

‘The track has been a ‘very long time coming’, they tell Metro.co.uk. ‘We’re a bit nervous about it but we’re looking forward to it.’

‘It’s been a joyful ride once again because we’ve already done this in the past a million times, but you just slide right back in,’ says singer Kim Sasbone – aka Captain Kim. ‘Maybe we were a bit rusty in the beginning but we’re back in full force.

‘We actually did make some stuff in the last 15 years, but it was just never good enough to put out. Sometimes we did put it out and it didn’t work but this one we have a really good feeling, the timing is perfect.’

After recording ballads, and experimenting with EDM, the band decided to stick with their winning formula instead.

‘It’s a classic Venga boys song, it’s a feel-good song, it makes you happy, it makes you smile from within and that’s exactly what this single is doing for you.’

Of course, the year 1999 is a defining moment for Vengaboys. Against all odds, they were conquering the world, with number ones across the world, millions of singles sold, and sharing changing rooms with Grammy award-winning juggernauts.

‘It was a whirlwind,’ Kim recalls. ‘Our very first tour on the US, for us, we were like 21 and it was the first time going to America and you’re like, startled all the time.

‘You’re on stage in the Chicago Bulls stadium with 80,000 people and there’s a line-up hanging in the dressing room and the dressing room is like a big camper van and it says, Ricky Martin, N’SYNC, Christina Aguilera, Britney Spears and it was just unthinkable for us to be there in that line-up.

‘To make it more exciting, we got on stage and everyone knows our song. Everyone knows We Like to Party, We’re going to Ibiza but they don’t know what we’re saying because they don’t have a clue what Ibiza is. They had signs up, “Woah, we’re going to eat pizza.” I think that was the most memorable.’

Cowboy Robin elaborated: ‘Because we were touring in the US at the time we went no 1 in the UK and that was amazing as well. We celebrated with Britney and N’SYNC. Lisa and I had a little flirt with Ricky Martin when we didn’t know if he was gay or straight. We were like I think he’s gay, I think he’s straight, that was fun.’

Fun is the force that keeps Vengaboys going; it always has been. Of course, 1999 and the early years of the noughties was an extraordinary era for the Vengaboys, they were on top of the world.

But looking back at the time through a 2021 lens, it’s no secret the media was relentlessly cruel and inescapable. While some of the biggest acts at the time would go on to succumb to the toxicity of media attention and the confrontations that come with it, it was an important lesson for the Vengaboys.

They had signs up, ‘Woah we’re going to eat pizza.’

Kim says: ‘Before this interview, I was telling someone how I experienced the press in the UK and America back in the days, it was totally different because there were as many haters as lovers. Journalists said how does it feel to be the most hated and the most loved band?

‘It hurt, it was hard because you’re a 21-year-old girl, English is not your first language so there was some sweat going on underneath those Venga outfits but in retrospect, it has shaped us and formed us and we learned so much in a very short period of time.’

Thankfully, such resilience is admirable, making the joy that comes with their music and performances unshakeable, which I’ve witnessed firsthand watching thousands erupt to bellowing Europop beats of their classic hits at Sink The Pink’s London Festival, The Mighty Hoopla, just three years ago.

Since then there’s barely a Pride line-up without the Vengaboys shining on its bill, and their crowds prove there are fans spanning across generations 25 years after being told: ‘You’ll be at best the next one-hit wonder.’

If the Vengaboys legacy is anything, it’s this, says Kim: ‘It doesn’t matter if you’re in the music industry or an artist, don’t let anybody talk you down, never.

‘If we can teach the younger generation to do what you think you’re good and what you love, don’t let anybody put you down, that’s the most important lesson. Except that happiness is just around the corner.’

1999 (I Wanna Go Back) is available on Spotify, iTunes and you can purchase a limited edition signed CD.