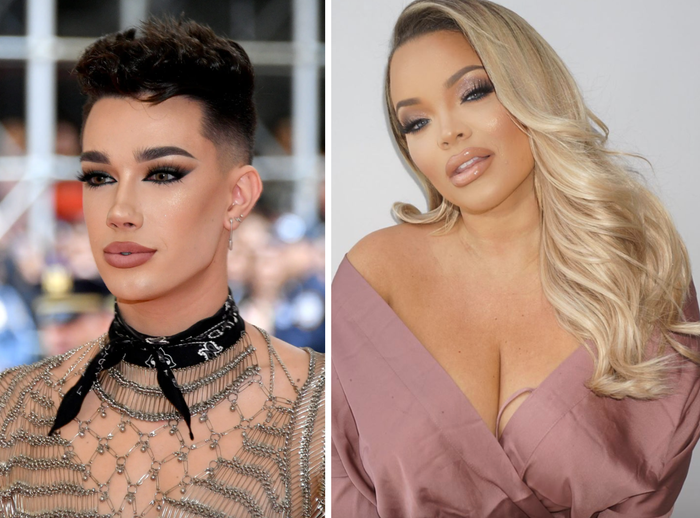 In the middle of a feud with 16-year-old TikTok star Charli D'Amelio, controversial YouTuber Trisha Paytas changed course and called James Charles "predatory" for hanging out with D'Amelio — and Charles wasn't having it.

Paytas had been beefing with D'Amelio, who is TikTok's most-followed person, earlier in the day. D'Amelio is facing a mass unfollowing on TikTok, where over 1 million people unfollowed her after a YouTube video showed her acting "rude" and "entitled," according to her critics, who include Paytas.

After Charles, who is 21, defended D'Amelio, Paytas, who is 32, went after him for hanging out with an "underage girl." In a TikTok, Charles responded to Paytas asking "How is it that James Charles is the victim in every single situation?"

"I didn't want to respond to this because I didn't want to give Trisha the attention that she's clearly craving, however, I have now been accused of being a child groomer and this is not an accusation that I'm going to take lightly," Charles said. "To insinuate that the relationship between Charli and I is anything other than just a friendship is absolutely disgusting."

"I don't need Charli and Charli does not need me," Charles continued on to say. "I became friends with the D'Amelio family as a whole very, very early on because this was all very, very new to them and I wanted to be a friend and a mentor in any way that I possibly could. And Charli and I, despite not being the same age, had one thing in common, which is coming into the spotlight at a very, very young age."

Charles then attacked Paytas, saying "This is something that Trisha has never experienced because the only reason she is in the spotlight is because she has said racist things, she has said the 'n word,' she's done blackface, she offended the trans community, she offended the DID community, she said Hitler wasn't that bad of a guy, voted for Trump, and has started a fight with about every single other creator on this platform."

"You are in no position to be talking about me and my career so I highly recommend that you stop starting fights with people that are half your age, pack it up, and work on holding yourself and your best friends around you, because they and you are the problem," Charles said.

Most of Charles' claims about Paytas are supported by video evidence on her channel, although she recently stated that she voted for the first time ever and for Joe Biden. When Charles refers to "your best friends around you," he is most likely referring to YouTuber Shane Dawson, who Paytas had just retweeted a tweet about.

The tweet Paytas retweeted shortly before Charles' rant said "Funny thing is, Trisha Paytas and Shane probably care more about James than the people around him. Tati threw him under the bus without a blink."

Earlier in the day Charles also tweeted in defense of D'Amelio and brought up the similarities between Paytas attacking her and "30+ year olds" dragging him — the 30-year-olds he's referring to are Tati Westbrook and Jeffree Star, who accused Charles of being predatory with straight boys in 2019. Charles denied the allegations at the time and both Westbrook and Star later apologized.

A few months ago, Westbrook also stated that Dawson had "manipulated" her into making the claims about Charles. Paytas, who is a long-time close friend of Dawson, has defended Dawson and attacked Westbrook and Charles since then.

In her earlier tweets, Paytas referenced Westbrook and said "Poor parenting on ur parents end James for allowing u to be friends with Tati, a middle aged woman while u were a teen. Unfortunately u were the victim then. But now Charli is the victim, u being friends with a minor is predatory."

She also said Charles was the only person who deserves to be canceled.

"He is a forever victim with a superiority conflict, has never said sorry his whole life/hangs out with an underage girl regularly," Paytas wrote, in an addition to more than a dozen other tweets and more than 40 TikToks about the situation between her, Charles, and the D'Amelio family.