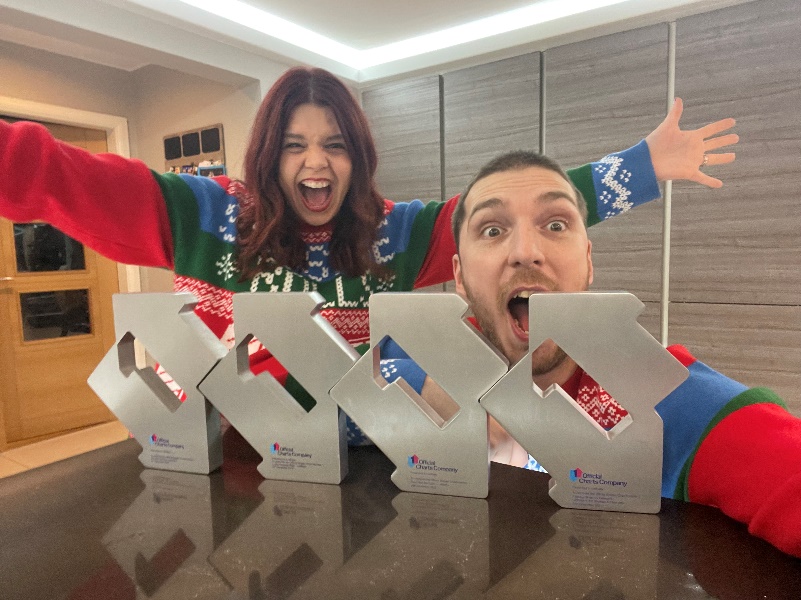 Viral star Mark Hoyle and his wife Roxanne have made history as LadBaby has clinched their fourth Christmas number one in a row, the first act ever to do so, and beating rivals The Kunts to the festive top spot after a bitter chart battle.

In 2018, Mark, Roxanne and their two children launched their first bid for the festive top spot in 2018 with a sausage roll-themed rework of We Built This City under the LadBaby name.

They dropped I Love Sausage Rolls in 2019 and Don’t Stop Me Eatin’ in 2020, matching The Beatles’ and Spice Girls’ trio of consecutive Christmas chart-toppers.

This year, their fourth number one in a row, Sausage Rolls For Everyone, has scored them a world record, meaning they’ll be able to add a Guinness World Record trophy to their pile of number one awards.

The festive track saw the husband and wife duo team up with megastars Sir Elton John and Ed Sheeran for a twist on their own original festive tune, Merry Christmas.

Reacting to the news of their fourth number one, LadBaby told OfficialCharts.com: ‘Thank you, thank you, thank you to the great British public, for every single person in this country that has downloaded and streamed this song over the last week.

The tune’s success has raised a massive amount for Trussell Trust, a food bank that provides 7,000 meals a day in the lead-up to Christmas, and a charity LadBaby has supported since their first since their first bid for number one in 2018.

‘Thank you for helping us raise the profile, raise money and awareness for the Trussell Trust, the food banks in the UK and helping support the 14 million people in this country that are living below the [poverty] line,’ Mark said on Friday.

‘We couldn’t have done it without you.

‘It means so much to us, and thank you so much for all the support, positivity and love that has been given to us over the last few weeks… Over the last four years!’

The incredible feat was threatened to be marred by chart rivals The Kunts, after the frontman Kunt this week accused LadBaby of using poverty to promote their career.

But while The Kunts landed at an impressive number five in this year’s charts with Boris Johnson Is STILL A F*****g C**t, LadBaby has again dominated the race, raising vital funds for charity in the process.

Meanwhile, Ed and Sir Elton’s track Merry Christmas was toppled from the top of the charts by, well, themselves.

It has been a major year for Sir Elton, with Sausage Rolls For Everyone representing his third UK number one this year alone, and Ed’s fourth.

‘Huge congratulations to Ladbaby, Ed Sheeran and Sir Elton John for their achievement this year – not least to Mark and Roxanne of Ladbaby in becoming the first act in history to record four consecutive Official Christmas Number 1s,’ he said.

‘To have matched The Beatles and Spice Girls was a fantastic feat last year, but to top them both, while raising money and awareness for foodbank providers The Trussell Trust, is remarkable.’