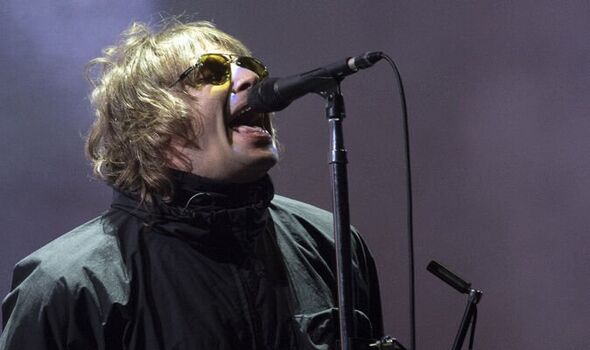 The song is mesmerising with its stirring instrumental start whipping up a frenzy with venomous vocal delivery from Serge. Underdog is another highlight of the set and fuses smoothly into You’re In Love With A Psycho, which the crowd bellow along to.

Their new line up is still formidable, the dynamic clearly not faltering despite the absence of their original lead singer. Set closers L.S.F. and ‘Fire’ are made for an occasion of such stature as today, providing an epic build up for Liam Gallagher.

In true Manc fashion, Liam swaggers onto the stage to the Manchester City champions chant, the masses at Knebworth reaching a fever pitch of excitement.

With plenty of bravado Liam had a dig at the bitter rivals Manchester United, and launched into his first song Hello. Oasis classics continued, with Rock and Roll Star and Morning Glory and its familiar hypnotic helicopter sounds at the start.

This feels like a knowing nod to Liam’s rock and roll entrance by helicopter, circling the venue to ensure fans spotted his arrival.

Blue and Red flares set off almost constantly by the fans created an intoxicating atmosphere, complimenting Liam’s taste for misbehaviour.

Liam then launched into his solo material, with Everything Electric a sing along highlight, written in collaboration with fellow rock icon Dave Grohl from the Foo Fighters.

New single C’Mon You Know was a typically cocksure statement from Liam, the words also emblazoned on the top of the giant stage set.

Liam is clearly relishing the big stage, and the one-upmanship firing up his famous rivalry with big brother Noel – even to the extent of wearing an almost identical outfit just make to make a point of replicating the achievement of the 1996 mammoth Oasis concerts.

The encore featured all of the Oasis classics, with a special guest feature from John Squire of the Stone Roses for set closer Champagne Supernova as he did in 1996.

Not as biblical as those gigs, perhaps – but it didn’t fall too short of the mark.