Just five days before the Twin Towers fell in 2001, MTV hosted its annual Video Music Awards in New York City. While the VMAs have always aired in September, this year MTV celebrated the first in-person award show since 2020 the day after 9/11’s 20th anniversary … with little recognition.

After a socially distant show filmed in different locations across New York City in 2020, the VMAs were back and broadcast from the Barclays Center in Brooklyn. In the months leading up to the 2021 event, it was suggested that MTV’s decision to host the event on the somber weekend was so the network could “pay tribute to the victims during the show,” per 9Honey. They did not. Instead, People wrote in June they would be collaborating with nonprofit 9/11 Day for activities leading up to the show to “promote awareness and positive action.” However, it’s a bit unclear what these “activities” were. A message from 9/11 Day aired during the VMAs’ TV broadcast, but the 20th anniversary of 9/11 wasn’t mentioned by the show’s presenters.

Viewers were upset MTV didn’t address the biggest event of the weekend, considering the award show fell just one day after the 20th anniversary of the attacks. 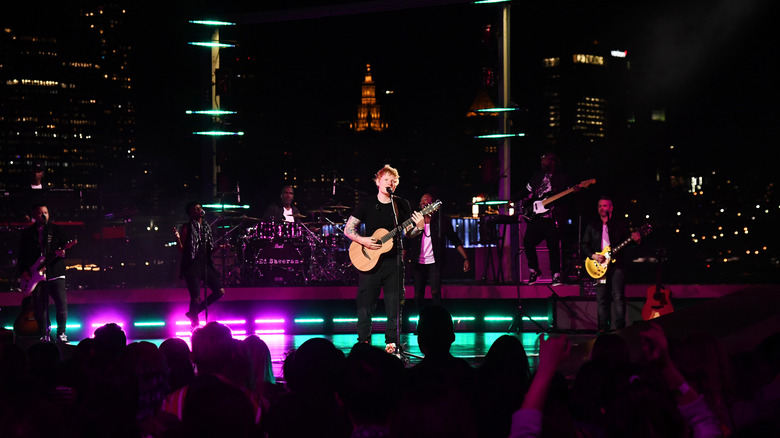 It was the elephant in the room, and MTV apparently didn’t feel up to discussing it. During the weekend of 9/11’s 20th anniversary, MTV couldn’t find the time in its 90-minute show to have even a minute’s silence for the victims, first responders, and families.

The VMAs, which celebrate the most entertaining and creative music videos of the past year, were hosted by nominee Doja Cat. While there were plenty of surprises — hello, Madonna’s long-awaited return — and excitement, the absence of mentioning 9/11 was felt by many. Ed Sheeran even performed his latest feel-good hit “Shivers” at the Brooklyn Bridge Park in New York City — not far from the site of the 2001 attacks.

Viewers expressed their outrage at MTV on Twitter, with one writing: “no mention of this being the 20th anniversary of 9/11…considering show is in NY,” while another said: “new york is so messy for hosting the vma’s the same weekend as 9/11.” Others made reference to MTV’s almost insensitive and “f***** up” decision to have celebratory VMAs explosions as someone wrote: “@vmas @MTV with the helicopters and fireworks, are yall are purposefully trying to trigger PTSD for 9/11 survivors who still live in NYC or what like the day after the anniversary?” Meanwhile, others simply wanted the network to acknowledge the catastrophic events: “You think they could have taken a moment to honor 9/11 being it was only yesterday.” MTV has yet to respond to criticism.