The Brown family is safe after a wildfire broke out near their home in Washington state. But the same can’t be said for the Alaskan Bush People family’s house, which may have been destroyed in the blaze.

The fire broke out near the Brown’s land on August 18, according to an Instagram update. Bear Brown, one of the stars of the Discovery Channel series, called the disaster was “devastating” and revealed that his family was staying in a hotel while they waited for the situation to be brought under control, In Touch Weekly reported.

On August 18, a wildfire broke out near the Brown family’s land. The family is safe, but the fire is still raging. To learn how you can help those fighting wildfire devastation, visit the American Red Cross at redcross.org or call 1-800-RED-CROSS. #AlaskanBushPeople

In an August 24 Instagram update, members of the Brown family revealed that a fire had broken out close to their home in Okanogan County.

“The family is safe, but the fire is still raging,” the update read. In an accompanying video, the family thanked the first responders who were working to contain the blaze.

The Palmer Fire has burned more than 17,000 acres and was 49% contained as of August 25. Evacuations have been ordered and at least 30 structures have burned, YakTriNews.com reported.

Bear Brown says the family is in a hotel

The family has grown so much this year but there is always more work to be done. 🧱

In a post on his private Instagram account, Bear revealed more details about how the wildfire has affected his family. He said they had spent the past few days in a hotel in Oroville, Wash.

In an August 19 social media update, Bear wrote that the family “suffered a devastating loss yesterday, a fire swept through our mountain, our home.”

“The loss seems to be great! It’s still burning!” he added, according to the New York Daily News.

Why the Browns moved to Washington 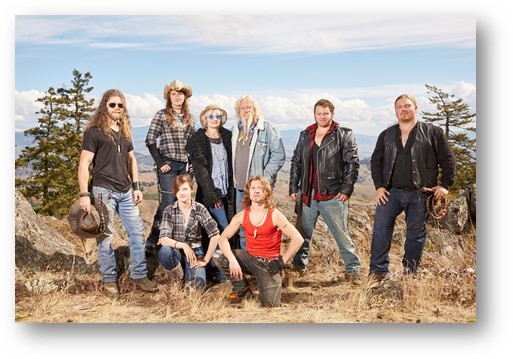 The Browns might still star on a show title Alaskan Bush People, but they haven’t actually lived in Alaska for several years. As seen in a 2018 episode of their series (which premiered in 2014), the family relocated to Washington state following mom Ami Brown’s cancer diagnosis. Their remote home was just too far removed from the medical care she needed.

“The doctors were quite emphatic that we couldn’t go back there, it was just too hard to get her to…to set up something she would need if something happened, and we also have to go in every three months now to get CAT scans and CT scans,” Billy Brown told Monsters and Critics in 2018. “It’s just too risky now.”

The family bought close to 500 acres of land in rural Washington state. It offered the space and privacy they craved while also making it easier for Ami to travel to Los Angeles for her cancer treatments.

“Where we are now is really cool, it’s a really nice piece of land, it’s very majestic,” Gabe Brown said to Monsters and Critics. “I don’t know, I think it might be a blessing in disguise.”