Towards the beginning of “Animal Wisdom,” Heather Christian offers you 90 seconds (“one and one-half minutes”) to gather four specific items that might be safely in reach of wherever you might be watching. It’s one of a handful of moments in the early going that helps make this two-hour experience an uncategorizable thing.

It’s also a participatory experience, as much as one can be when performers and audience are separated by months and miles. That active engagement doesn’t end with those items you may grab from your kitchen/living room/the proximity of your couch, but they’re an indication that what transpires over the rest of “Animal Wisdom” doesn’t follow a set path. By the time the assembled quintet of musicians on screen have finished their opening songs and Christian, your virtual host for the evening, has shown you a photo of the biggest catfish you’ve ever seen, it’s easy to believe her when she says: “This is something else.”

“When you decide to bastardize not one but two different kinds of mediums, or smush them together, the rules start to disappear and you can kind of try anything,” Christian said. “I felt like I was nine, going, ‘I don’t know, what are we gonna make?!’ I love that space. I love feeling like I don’t know what I’m doing.”

The sections of “Animal Wisdom” where Christian once addressed an in-person audience are here delivered straight to camera. Moving through presentations and anecdotes in between songs, the show becomes a seance of sorts. Through Christian’s discussions of childhood imaginary companions and stories of elder relatives, it’s both a tribute to those memories and an invitation to think about how we carry around those who are no longer with us.

In an era when some are emerging from a time of great loss and many more are still in the heart of it, “Animal Wisdom” is an exploration of how we each go through that process and the ghosts we try to keep in our presence. Is a spirit a memory that you can do your best to summon? Is it something that sits on a branch outside your window, perpetually watching over? Is it a fleeting thing you have to train yourself to recognize when it comes in its own mercurial time?

Speaking to that great collection of different experiences would be easier in a live setting, with dozens of people all latching onto various details at any given moment. Locking the viewer into the perspective of the camera was one of the biggest hurdles for adapting the show. 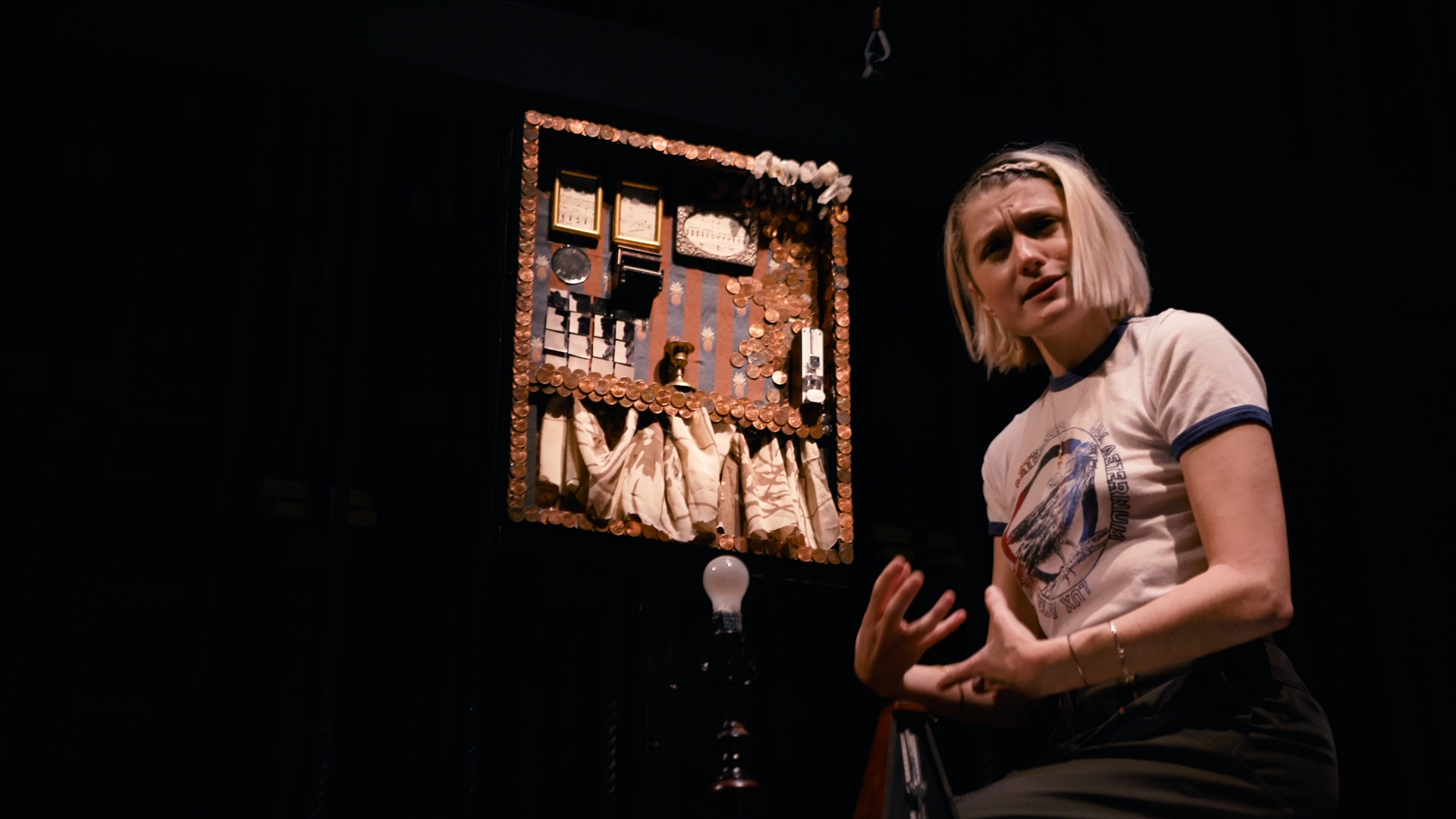 “One of the reasons I really love theater is that it’s subjective depending on the experience. What you catch, especially in my pieces where like the lyrics tend to be pretty symbolic, is through a pretty metaphorical net. In film, you really have to decide what everybody’s looking at. That’s intimidating to me, a person who’s not particularly  visual,” Christian said. “In the effort to bring that into the room, I buried Easter Eggs all over the set. Just in case there was somebody who was paying attention to the minutiae, who had either been listening real hard or had been to the Bushwick Starr Show, they would like catch little things out of the corners of their eye on set.”

It’s an idea of permanence that also made the idea of filming individual takes another key part of this overall translation. Some of the deepest emotional moments of catharsis in “Animal Wisdom” would normally happen in the natural flow of a single performance. The film didn’t shoot in sequence, so getting in and out of those moments without giving the overall project an overly polished feel became one of the paramount tasks for Christian, director Amber McGinnis, and cinematographer Aiden Korotkin.

“I’ve never seen the show. I’ve been inside of it, so I never know how things are going to read. But I did know that if I was going to manage to turn a theatrical performance into a film performance, and make it more intimate and smaller and realer that I was going to have to really trust my directors to tell me that things were reading or if I was connected or not,” Christian said. “There are some moments in the play that are hard to remain inside. We were all very vocal about, ‘This is how much longer I can do this’ or ‘I need a break’ or ‘I need a hug.’ We were moving so fast, there are some things that we only did one take. And I just trusted the directors when they told me we got it.”

Christian and the crew went through a quarantine process before filming so that they could all safely work together as a group. Precautions still limited the amount they could sing in the Wooly Mammoth space — fortunately, a live recording of “Animal Wisdom” done back in 2018 meant that they had audio to work with and work from.

Armed with those tracks, there was still plenty of opportunity for filming to take on a more spontaneous feel. One of the early jolts of energy in “Animal Wisdom” comes from the song “Wild Thing’s Daughter.” In this filmed version, Christian and violinist Maya Sharpe parade around the front of house area, flitting around staircases, swiveling in chairs, and tapping on tables. In short time, a few whip pans find the whole rest of the group (Sasha Brown, Eric Farber, and B.E. Farrow) joining in.

“It was our last day, and we had to scrap the whole plan that we had shot-listed. We ended up having to improvise most of the choreography. I gave my stage director Emilyn Kowaleski a hat with a bunch of slips of paper that I had written random dance moves on. So she’s tucked behind the camera, screaming out dance moves to Maya and I,” Christian said. “It was really important to us to use the theater as a vessel and not just the stage. There’s so much I missed about the spaces that I hadn’t been in, like the dressing rooms and the rehearsal halls and backstage areas and shops. Those are the places that are really haunted. So I thought it was necessary to use the whole building.”

Aside from having to navigate the extra challenges of adapting the show for a more existential venue, remounting “Animal Wisdom” in this form also gave Christian the chance to reconnect with the actual content of the work itself.”The good news is that I had instant access, because it’s all true. It’s all mine. It’s not bullshit. They are conundrums that I’m still struggling with,” Christian said. “I’m in a different place with them than I was in 2017. I’m in a stronger place than I was in 2017. But I remember viscerally what it felt like to be in 2017 and impacted as harshly as I was then. So it was an easier recall than I thought it was gonna be. And my therapist was on speed dial.” 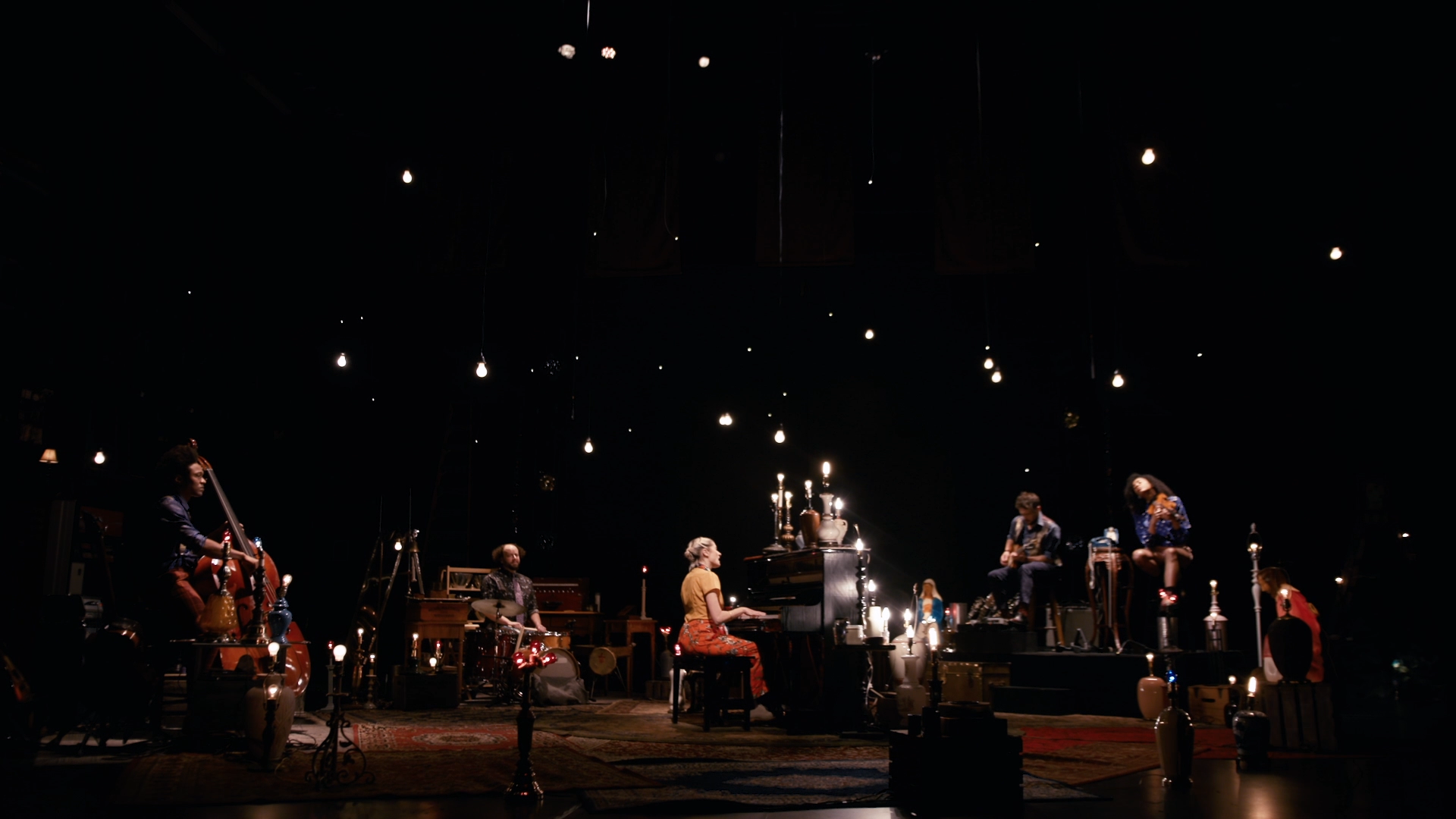 “Animal Wisdom” slots thematically right alongside another recent work that also managed to tap into the uncertainty of the past 18 months well before it arrived. “Prime,” which was released in the early weeks of last year’s lockdown, is a song cycle that celebrates the sacred universal power of just getting through the day, the rituals we use to tackle the unknown.

Now, as we’re hopefully putting something of a bookend on an incredibly tumultuous collective experience, “Animal Wisdom” is offering another kind of bridge between the immediate present and the amorphous past. It may be traveling in a slightly different direction, but it’s another instance of using artistic expression to find that connective tissue.

“Time only exists at the human scale. The human brain, that’s the only place where time exists. We’ve beatified it. We’ve made it this sacred thing,” Christian said. “When I think about if we’re going to extinct ourselves, if we keep going down this road, raping and pillaging the planet like we’re doing. That is a beautiful trace fossil that we will leave behind this notion of how we’re quantifying and categorizing and counting how long and how much and how full our lives are.”

Like “Prime,” Christian also drew on some well-established musical and spiritual traditions in structuring “Animal Wisdom.” As “Prime” tried to sync up with some of the rhythms of daily prayers, “Animal Wisdom” draws on the specifics of half a millennium of Requiem Masses. Mozart and Brahms’ versions may not have involved blindfolds or invocations of cicadas, but that’s part of Christian’s greater project of taking something more rigid and making it universal for people of all backgrounds of beliefs.

“I feel like all I’ve been doing is stepping into rooms and begging people to reflect. And all of a sudden, now that’s not such a massive ask,” Christian said. “You don’t have to believe a certain thing in order to feel that things are holy. That’s available to everyone. And I feel like we’ve lost a certain degree of reverence for the miracle of being here in the first place. But I think that I think we need to, like put back on the plate of our daily lives.”

Most of the overall contour of “Animal Wisdom” is a discovery best left for the actual experience, but it’s safe to say that there’s a cleansing nature to how this experience closes. In both word and song, there’s a way it takes some of the most elusive concepts of human life — time, love, grief — and offers a different way to consider each.

“I wrote ‘Animal Wisdom’ thinking, ‘We have got to find a way to talk about the stuff that we feel a lot of things about, that we cannot explain, in a way that’s not prescriptive. In a way that doesn’t coddle us, in a way that can speak to everybody: cynics, scientists, atheists, devout, everyone. There’s something that we all have in common. To help people feel OK about not being OK, that’s sort of my grand aspiration,” Christian said. “None of us know what the hell’s going on. That can be a comfort, and we can rest in this ignorance, and maybe turn it into wonder. I’m glad we don’t have it all figured out. I think that’s great. We’re gonna be wondering forever. So let’s turn anxiety into curiosity and try to get okay with bumping around.”

“Animal Wisdom” is available to stream here through June 27.