Last night on Double Shot at Love, it was finally time for DJ Pauly D and Vinny Guadagnino to call their final cabs and then crown a winner. Those who watched know that Vinny chose Alysse Joyner over Elle, which was a surprise all on its own but no one could have expected what came after.

During the Double Shot at Love reunion, all the women who competed for Pauly and Vinny’s hearts were there and they dished on all the dirt that went on and didn’t make it on camera.

We already knew that Pauly picked and then unpicked Nikki at the end of the season so, naturally, she came to the reunion show (hosted by Justina Valentine, by the way) with a huge attitude. It was revealed that after the show, Nikki blocked everyone she previously had filmed with and then opened fire on Mish for being a fake friend.

But what about Alysse and Vinny? What happened to their shot at love after cameras stopped rolling?

It turns out that relationship fizzled too and Vinny has a great explanation as to why. He was forced to keep his Double Shot at Love pick a secret until the season finale aired. That means they couldn’t be spotted together and had to rely on phone calls and text to continue their romance and, apparently, that didn’t work.

If that’s really why they aren’t together, though, it doesn’t explain why Alysse is so bitter. After the show aired, she received several comments on Instagram suggesting that she should give Vinny another chance. Clearly, Alysse doesn’t want to do that… at all.

After the show, Alysse posted a gorgeous picture of herself in a white dress and in the caption she wrote, “I’m actually all set luv, enjoy.” Then, she tagged Vinny’s Instagram account to ensure he saw it and used the Double Shot at Love hashtag.

In the comments, many fans asked her about Vinny and why she didn’t give him another chance. Alysse took the time to respond too, and she didn’t mince words. 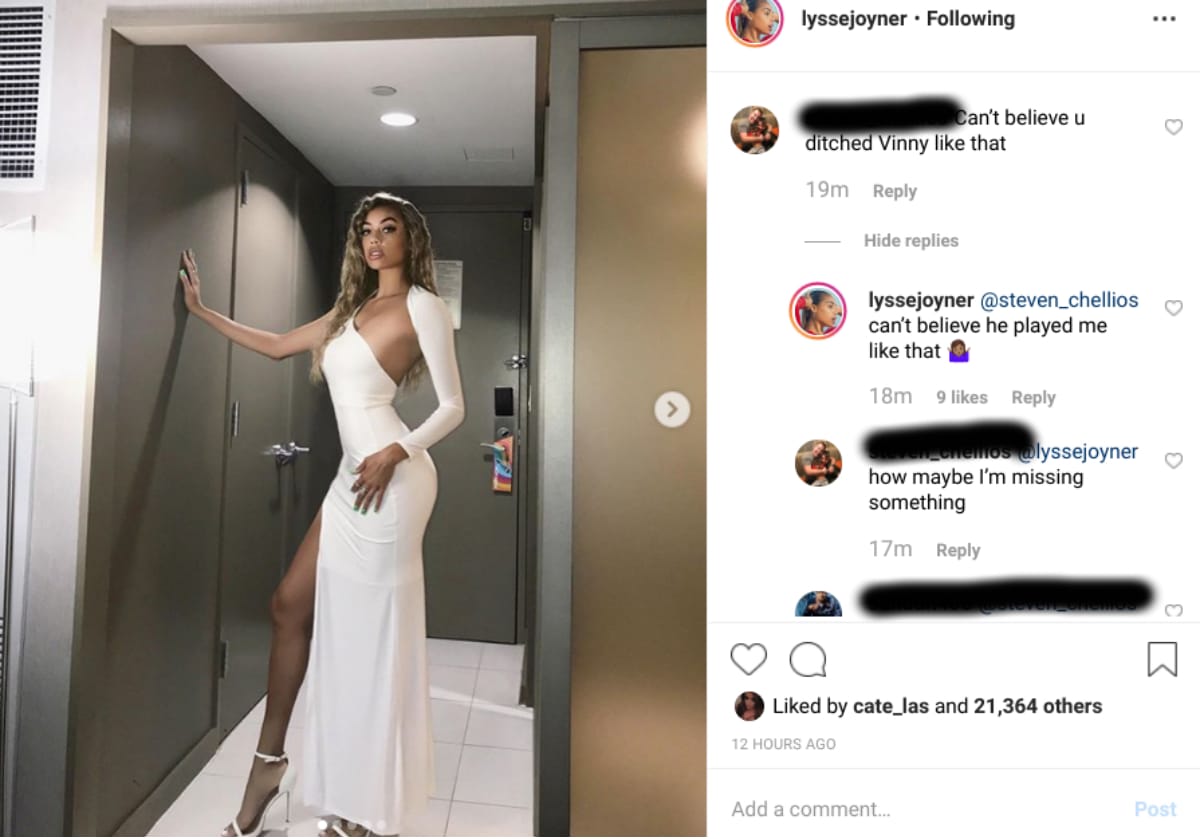 Considering how things went down as Season 1 of Double Shot at Love with DJ Pauly D and Vinny ended, it’s almost a sure bet that the show will be returning for Season 2. After all, the Jersey Shore bachelors seemed to do well in the time slot and the show was pretty popular.

Both men left the show single with Pauly opting to “ride solo” after Nikki freaked him out by telling him how in love she was. Then Alysse and Vinny fizzled out or maybe that was the plan all along so they could return and try to find love again.

Do you want to see Pauly and Vinny return for another Double Shot at Love?