Beat the Chasers: Bradley says he and Shaun 'don't get on'

Bradley Walsh welcomed Joe Pasquale, Katherine Ryan, Radzi Chinyanganya, Christine Ohuruogu and Shaun Williamson to the first-ever celebrity edition of Beat the Chasers this evening. The stars were hoping to win money for their respective charities after battling it out with Shaun ‘The Dark Destroyer’ Wallace, Anne ‘The Governess’ Hegerty, Jenny ‘The Vixen’ Ryan, Mark ‘The Beast’ Labbet and Darragh ‘The Menace’ Ennis. However, Shaun cheekily hit out at Bradley when the ITV host quizzed the Chaser on his musicals knowledge.

Christine was the second contestant to try and win some money for charity but when a question about Oliver! came up, Bradley couldn’t resist showing off his knowledge.

Bradley asked: “In the stage musical Oliver! who leads the song Consider Yourself?”

Christine answered correctly with Artful Dodger before the host went on to quiz the Chasers on their knowledge of the musical.

“Of course it’s the Artful Dodger,” Bradley said. “Directed by?” 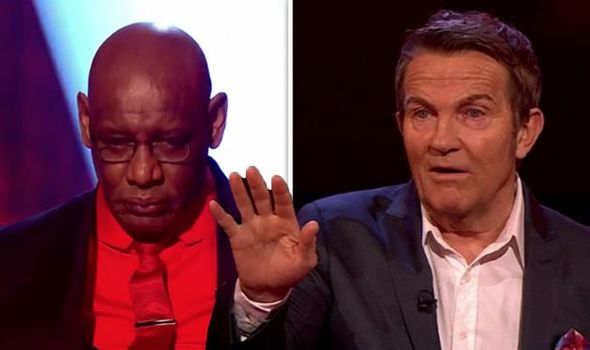 “Indeed and the son of?” Bradley asked and The Governess replied: “Herbert Beerbohm Tree.”

“Who founded?” The host asked but before the Chasers could answer, Bradley said: “RADA.”

“Come on loves,” he quipped. “Do you want me to come and sit up there?”

“No,” Shaun quickly hit back and Christine commented: “That’s a very quick [response].”

“We don’t get on,” Bradley remarked as the Chasers giggled at the comments.