Christopher Biggins has been met with a huge backlash after he blasted the news that Superman’s son has come out as bisexual in an upcoming DC Comics issue.

His sexuality will be addressed in the fifth issue titled Son of Kal-El, which will be released on November 9, with many praising the move.

However, appearing on Good Morning Britain to discuss the fictional romance, the panto star questioned why bosses needed to make the character bisexual, stating that it was ‘pandering to the woke system’.

‘Why? Why? Why do we have it? Why do we need it?,’ the 72-year-old began, before comparing this to Johannes Radebe and John Whaite’s all-male pairing on Strictly Come Dancing. ‘If you want to do something like this, do something original, don’t take characters that already exist and make them into something they’re not.

‘I do find it absolutely bizarre that this is what people want nowadays. Why can’t we stick to what we’ve had and been given? Why don’t they do some new characters, why don’t they create something new, something different, then go to a character we all know, we all love and we all know as this?’ 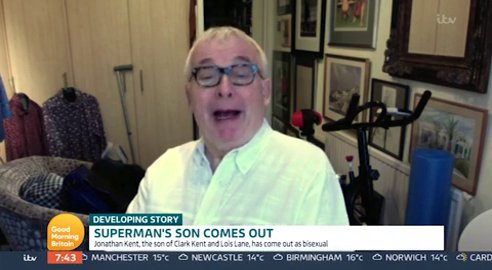 Podcaster Aamir Hassan defended the move as ‘fantastic’, and explained how much Jonathan’s sexuality could mean for young bisexual viewers.

‘It is incredible to see superheroes actually become actual superheroes,’ he hit back. ‘For a lot of young people, they don’t have the privilege of coming out and they’re in positions where they are not able to come out, they’re not able to be themselves.

‘I’ve been there myself before, they look to media, they look to entertainment, they look to comic books for solace and to see themselves. If even one young person out there can see Superman’s son and it helps them, I don’t see what the issue is.

Aamir also suggested that the argument that writing the character as bisexual is ‘too woke’ is another way of saying that people don’t want others to be ‘helped’.

‘If I said to you, “This superhero will help some young people understand their sexuality, feel seen or feel represented in a space where they are absolutely suffocating under their sexuality and that it could potentially save a life”…’

Fans were left fuming by the argument, and flocked to Twitter to share their ‘disappointment’ that the controversial star – who previously shocked Celebrity Big Brother viewers with his comments on bisexual people – was given such a platform.

‘Biggins is a real disappointment these days,’ one tweeted.

‘Dissapointing that #GMB keep rolling guests like him out – voices on a stick who will do what the producer wants, probably for a small fee,’ another said. ‘Biggins, it seemed to me, had no idea what the actual story was that he’d been asked to comment on. Really dissapointing @ITV [sic].’

‘Christopher Biggins made me want to smash my television this morning on #GMB, talking absolute b******s,’ a viewer penned.

‘Is Biggins stupid? Isn’t this Superman’s son. Why’s he so triggered by this,’ a follower questioned. ‘Clearly has no clue about comic book characters and representation. #GMB.’

‘Really don’t care that Superman’s son is bisexual. It’s not “woke” or “negative”. At the end of the day, who cares? Who’s life is it effecting? People got too much to say #GMB [sic],’ a Twitter user said.

As one added: ‘People who have an issue with bisexual #Superman aren’t comic book fans. If they were they’d know the entire comic book universe is full of queer characters and queer coding and always has been #gmb.’

Christopher has previously caused outrage with his views on bisexual people during his stint on Celebrity Big Brother in 2016, and was eventually thrown out of the infamous house by bosses.

During a conversation with Mob Wives star Renee Graziano, he said: ‘The worst type I’m afraid to say are the bisexuals.

‘What it is is people not wanting to admit they’re gay.’

He also suggested they were responsible for the spread of Aids, calling it a ‘bisexual disease’.

The star was booted off the show soon after, with viewers complaining to Ofcom over the scenes.

Good Morning Britain continues on weekdays at 6am on ITV.