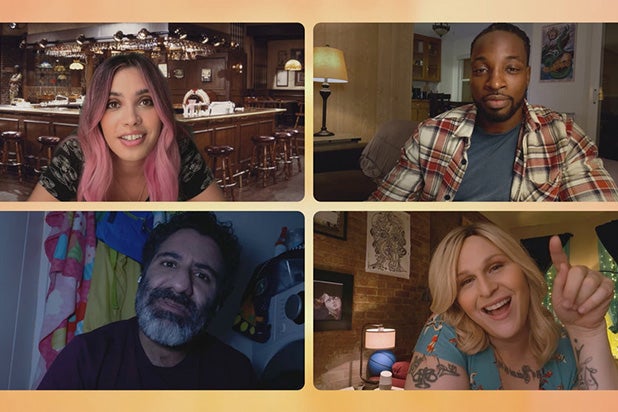 Shakina, a star of NBC comedy “Connecting…,” is ripping her home network for giving Donald Trump a town hall she says will promote “fear mongering, bigotry [and] disinformation.”

“Shame on @NBC. Y’all sign my checks as of late but I’m disgusted by my home network giving Trump a platform for fear mongering, bigotry & disinformation,” the actress said on Twitter. “Don’t praise yourselves for putting a trans woman on primetime then give a platform to someone who wants to abolish my rights.”

“Believe it or not, America is not reality television,” Shakina added. NBC did not immediately return TheWrap’s request for comment.

NBC News announced Wednesday that it will host a town hall event with Trump on Thursday, an event filling the timeslot vacated by the second presidential debate after Trump withdrew over objections to the debate’s virtual format. As TheWrap previously reported, the town hall event has drawn criticism from those who say it unfairly competes with a rival ABC town hall with Democratic nominee Joe Biden, an event scheduled last week.

Thursday’s Trump event will lead in to a new episode of “Connecting” and will likely give the low-rated comedy a boost in the ratings. Regardless, several of Shakina’s co-stars have also spoken out against the Trump event, as has series creator Martin Gero. Gero and actor Brendan Gall tweeted the same statement on Thursday, within hours of Shakina’s first tweet.

“I strenuously object to @NBC giving Trump a town hall directly opposite Biden’s on @ABC,” they wrote. “Trump pulled out of the debate to destabilize the election. I understand NBC is required to give him an hour of prime time but request that they reschedule it so that America can watch both.”

Last week, “Connecting…” debuted to a paltry 0.3 rating among adults 18-49 and just 1.6 million total viewers. That makes it the least-watched new series premiere on broadcast thus far this fall. Having a town hall as lead-in should help boost the “Connecting…” ratings — at least, for Thursday’s first episode at 9 p.m. ET. A second episode will follow before “Dateline NBC” airs at 10.

Airing ahead of the first Trump-Biden debate last month, NBC’s “The Weakest Link” reboot posted a preliminary 1.3 rating and 6.1 million total viewers. The following week, the trivia show declined to a 0.8 rating and 4.7 million viewers.

(It is worth pointing out here that Week 2 of a new show, especially one with returning I.P. like “The Weakest Link,” rarely holds up to Week 1. Plus, Week 2 of “The Weakest Link” went up against the NBA Finals on ABC. But it is undeniable that the Trump-Biden debate helped.)

A town hall is no debate, but this close to the election, there is no debating that Trump’s town hall will draw large Nielsen numbers.