Coronation Street star Simon Gregson has revealed that a huge character death is on the horizon for 2022.

The I’m A Celebrity contestant, who plays Steve McDonald on the ITV soap, joined Tuesday’s Good Morning Britain where he weighed in on the news that executive producer has confirmed someone on the cobbles will die.

‘It’s not me,’ Simon told presenters Susanna Reid and Richard Bacon. ‘I don’t know who it is but now you’ve got me worried because I’ve been out the game so longy, I’m not sure if I’ve signed my new contract yet. Who knows!’

Simon added that as a soap actor you ‘never know when your time is up’ as the grim reaper can strike at any time.

‘You could be here for life, look at the amazing Bill Roache,’ he continued. ‘But also, you couldn’t.

‘You can’t relax as such because one year, they could say “we’ve decided you’re out”. They like to keep you in total fear.’ 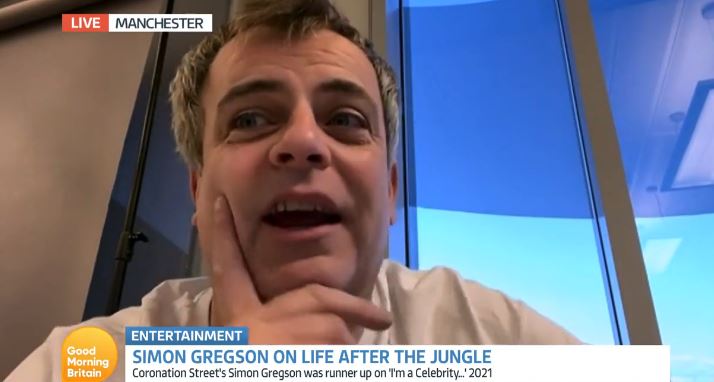 Simon was a campmate in the recent series of I’m A Celebrity and exited the competition show in second place after Emmerdale’s Danny Miller.

After exiting the show, he admitted that he successfully managed to sneak stock cubes into the castle upon his return when the celebrities were evacuated due to Storm Arwen.

Speaking in Legends Of The Castle, Simon spilled: ‘I would try to smuggle in some salt, pepper, and a lot of stock cubes.

‘Every time I cooked I put a bit of stock cube in.’

Good Morning Britain airs weekdays from 6am on ITV.