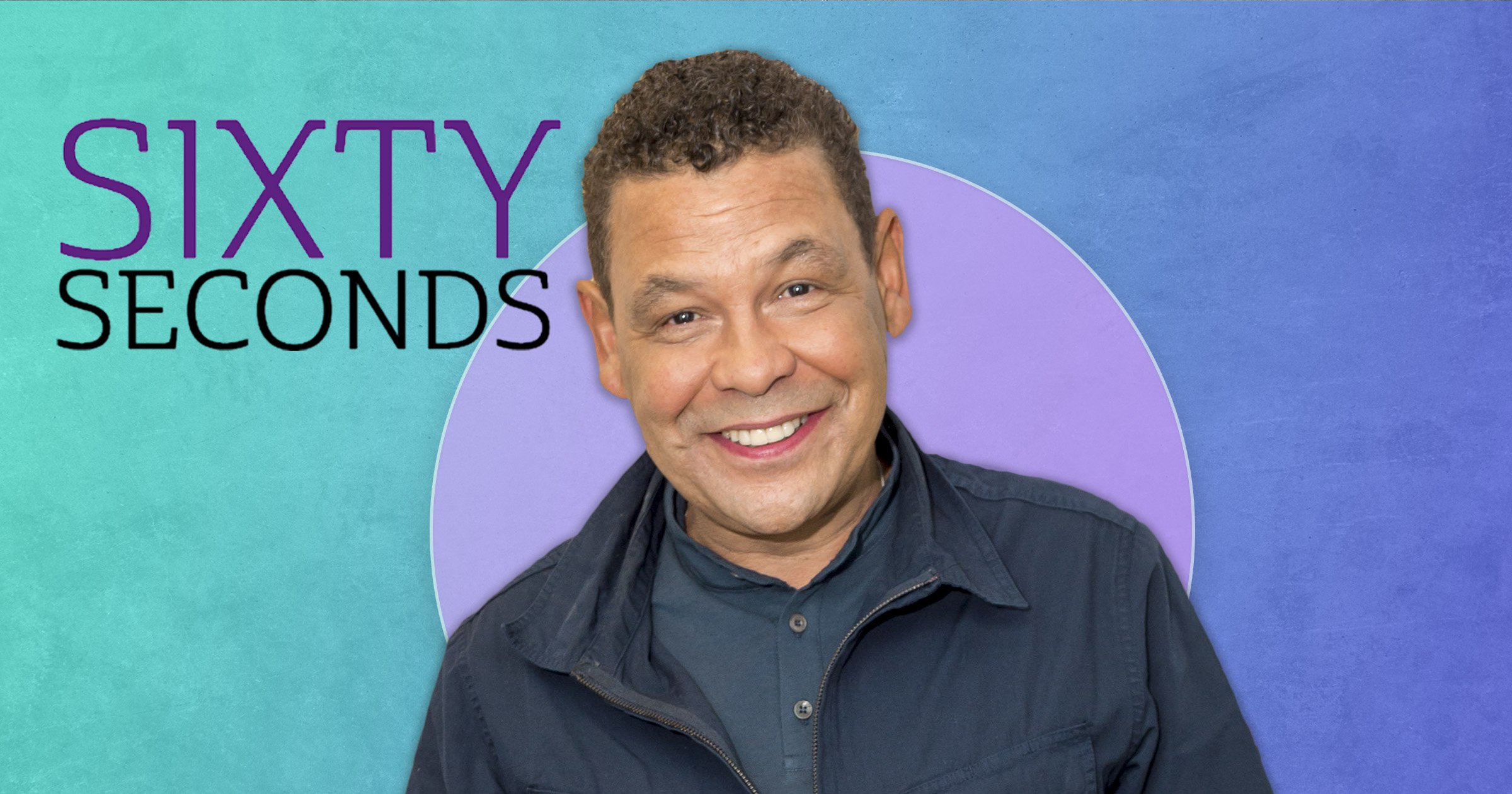 The actor and DJ, 57, on catching Covid, making it all up on Corrie and why he’d
never inflict his music on us all.

I had a great first week. It took me long enough to get a promotion from Saturdays to daytime five times a week, didn’t it? But I’m chuffed and we’ve hit the ground running. We’ve put on a load of extra listeners already. And it’s given me a chance to be more eclectic, to play classic rock, ska, reggae and indie.

Do you play what you want or do they tell you?

There’s a playlist and it’s four of theirs to two of yours. We’re trying to make it upbeat and fun. The interviews have been great.

Last week was Robert Plant from Led Zeppelin, an absolute hero of mine. He’s so nice. I ended up calling him Bob and he said, ‘No one’s ever called me that.’

What was the first record you bought? The Wombles?

No, it wasn’t! I think it was the Bay City Rollers’ Bye Bye Baby. I used to have the trousers with the tartan stripe and the stack heels and six-button waistbands.

And the modern stuff? Would you know Dua Lipa?

Oh yeah, definitely. My daughters are 18 and 23 and they keep me all over the modern stuff. They’ve introduced me to Finneas, Billie Eilish’s brother.

Do you ever hear yourself saying dad stuff like, ‘What is this racket?’?

I try not to be that guy. I interviewed Kelis and she said she doesn’t like modern music because it all sounds the same, and I said, ‘You’re turning into your parents, Kelis!’

But if you look at those old Top Of The Pops shows, there was so much s***e going out when we were kids as well. You only remember the bangers. I’m sure there’s a load of s***e going out now but lots of stuff will become classics.

Are you still making music? You were in bands when you were younger…

Not really. All the bands kept breaking up and there was a surfeit of lyrics and a deficit of musicians so I turned all the lyrics into poems. I play the piano and guitar when I’m at home but I do so many things that I think I’d p*** people off if I started bringing out albums as well. I do compilation albums. My Trunk Of Funk Volume 2 is about to drop.

You started out as a spoken-word poet…

Yeah, that’s how I came to the nation’s attention. When I was 17, I did my first John Peel session. I used to write poetry about Thatcher and police harassment and the riots, and I started doing Wogan.

I started using poetry as an outlet for my sense of humour, which is when I started getting into stand-up, and I was doing Saturday Night Live. I left that to go and do this BBC2 sitcom called Red Dwarf and the rest is history.

And then Coronation Street!

I loved playing Lloyd. They let me add so much of myself to the role that it didn’t feel like acting, to be honest. Me and Simon Gregson [Steve McDonald] were such good pals.

At least once a month the producer would have us up to the office, begging us not to use the script as a template because we’d just make it all up like mates chatting in a pub.

I suppose you never say never but when I was in the jungle [for I’m a Celebrity…] my brother died and I thought, ‘If I died, would I be happy with the way my career’s gone?’ And I said to myself, ‘No, I wouldn’t.’

They make it really difficult for you to leave Coronation Street. It was a great job. The pay isn’t amazing but it’s better than digging ditches in the cold.

But I wanted new adventures so I left and started doing The Gadget Show, which I loved. I’ve just started doing this new daytime game show on Channel 4 called Moneybags, where you can win a million quid a week!

I was at Corrie for ten years and I didn’t want to be typecast. Plus, I wanted to make more Red Dwarfs and they don’t like you doing other stuff when you’re in Coronation Street.

You caught Covid recently. How did that go?

It was horrible, actually. I was double-jabbed and I was glad because it might have been a lot worse if I hadn’t been. I couldn’t breathe. I felt like I was drowning. I couldn’t get enough oxygen into my lungs, which was pretty scary.

Anything else you’ve got going on?

I’ve got a new show for Sky History, which starts in January — ten one-hour shows about UFOs. And they definitely exist!

So we have radio, album, game show, documentary series… No calendar? No underwear range?

[Laughs] Oh God, no! I can’t imagine me being Mr July in my big boys and boots, can you?

Craig Charles presents on BBC Radio 6 Music and BBC Sounds from 1pm to 4pm on weekdays. Moneybags starts on C4 at 3pm on Monday

How to get your Metro newspaper fix

Metro newspaper is still available for you to pick up every weekday morning or you can download our app for all your favourite news, features, puzzles… and the exclusive evening edition!