The ‘Guardians of the Galaxy’ actor will be joining Daniel Craig and director Rian Johnson when production of the follow-up to the 2019 mystery film starts in Greece in the summer.

AceShowbiz –Dave Bautista has joined the cast of Daniel Craig‘s “Knives Out” sequel.

The James Bond star and director Rian Johnson are filming back-to-back sequels for Netflix and the “Guardians of the Galaxy” standout will be part of the cast when production starts in Greece this summer (2021), according to Deadline.

It’s not known what character Bautista will play, but Craig will be back as quirky detective Benoit Blanc.

Shortly after his casting was announced, the “Stuber” actor turned to Instagram Story to poke fun at it.

“Did @007 really think he was going to kick me off a train and that was the end of it? [happy devil emoji],” he wrote over a screen-capture of the news headline. 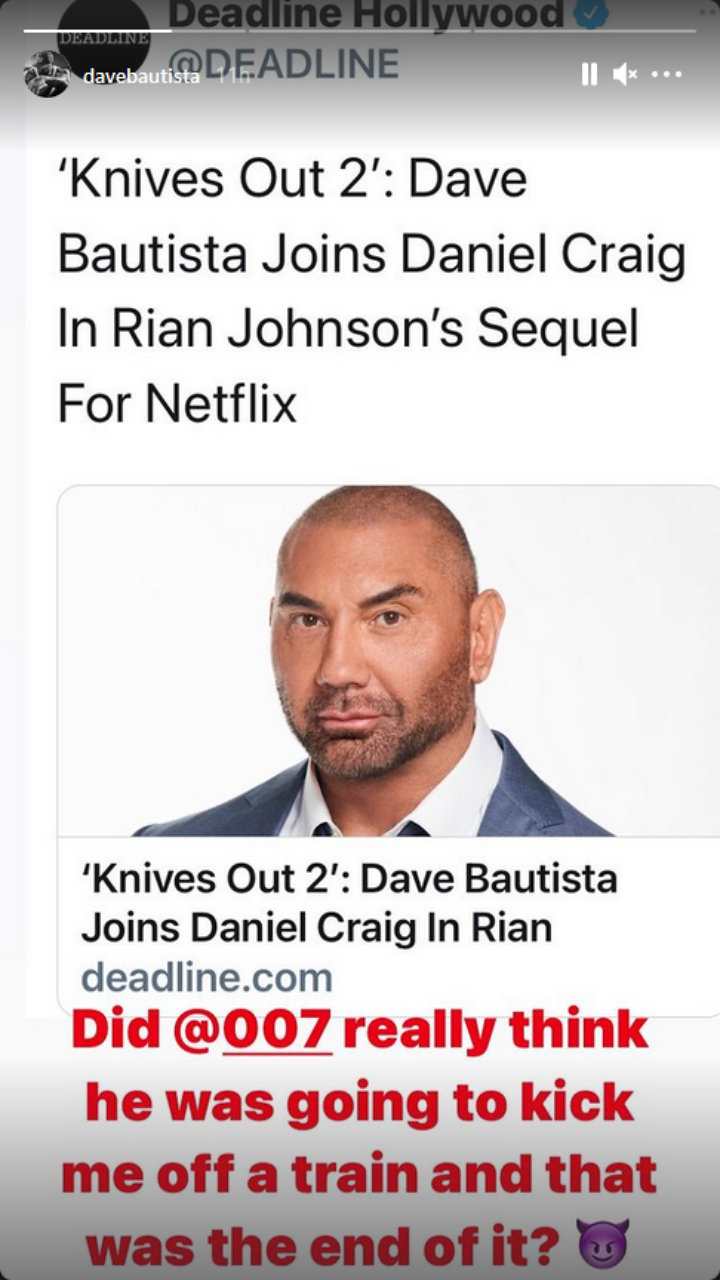 Dave Bautista reacted to his ‘Knives Out 2’ casting news.

Meanwhile, Jamie Lee Curtis recently revealed she would not be reprising her character Lynda Drysdale for the “Knives Out” sequel.

“To clear up any rumors, the Thromby family is in family counseling and the therapist suggested they stay away from Benoit Blanc in the future,” she wrote, adding Lynda “was fine as she kicked her loafer wearing p**ck of a husband, sorry @donjohnson to the curb.”

She added, “NONE of us will be joining Mr. Blanc in Greece. As the family spokesperson we wish the filmmakers all our best in their new venture.”

Being made on a $40 million budget, the original “Knives Out” film went on to earn over $311 million worldwide. In addition to Craig and Curtis, it has Chris Evans, Ana de Armas, Michael Shannon, Don Johnson, Toni Collette, LaKeith Stanfield and Christopher Plummer in its cast ensemble. Most of them won’t return in the sequels.