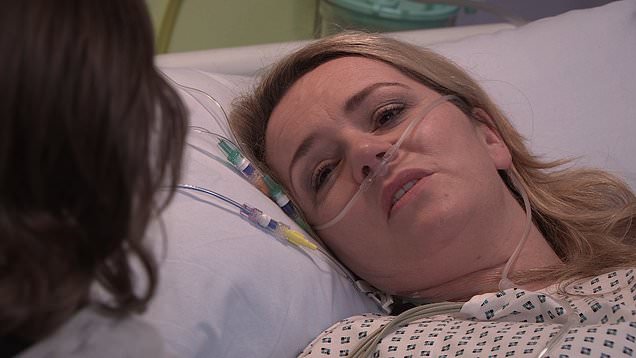 Natasha Blakeman’s (Rachel Leskovac) life is on the line in Coronation Street, after she was wounded in a case of mistaken identity.

The popular character was shot by drugs baron Harvey Gaskell (Will Mellor) during Friday’s (October 22) edition of the ITV soap, when he mistook her for Leanne Battersby (Jane Danson) .

Both Leanne and Natasha were wearing the same Halloween outfit, hence why Harvey had assumed Natasha was his archenemy.

Harvey was apprehended, after Leanne crashed her car into a skip, knocking him out. Natasha, meanwhile, was taken to hospital in the wake of the shooting.

It’s touch and go, as her nearest and dearest hope and pray that she will pull through.

But will Natasha die?

Does Natasha die in Coronation Street?

It’s currently unknown if Natasha dies in Coronation Street. She is conscious in Monday’s (October 25) double-bill of the serial drama, and the doctors inform her that she’s in need of an operation.

Sam (Jude Riordan) pays her a visit ahead of the operation, and – in emotional scenes – he takes his mum’s hand, and listens as she tells him just how much she loves him.

Sam however, is overwhelmed by all that’s going on around him, and talks about what anaesthetics they’re giving her.

‘I’m so proud of you,’ Natasha says, smiling at her son. ‘The boy that you are. The man you’re growing up to be.’

Sam, giving it some thought, says: ‘They say you don’t dream when you’re in an operation. Will you tell me when you wake up if that’s true?

‘Will you try to dream?’

Emotional, Natasha adds: ‘I’ll dream of you. Like I always do.’

She pulls Sam in for a hug, and Nick Tilsley (Ben Price) breaks down in tears, knowing this could be it for Natasha.

‘Don’t worry’, he tells her, making it clear that he’ll look after Sam of she doesn’t recover.

After the hug, Natasha tells Sam that it’s them ‘against the world.’

No matter where I am. How far away. I’m always with you.’

The doctor comes in, revealing to Natasha that it’s time for her operation, and thus she pulls Sam in for one more heartfelt hug, before saying goodbye to her son.

It’s not yet known if Rachel Leskovac is leaving Coronation Street. The star reprised her role as Natasha last year, after a 10 year hiatus.

She initially played the character between 2008 and 2010.

Rachel, 45, is also known for her work on Hollyoaks, where she played Joanne Cardsley from 2015 to 2016. She has also featured in the likes of Last Tango in Halifax and Happy Valley.