Domina premieres Friday, May 14 at 9pm on Sky Atlantic and NOW TV. The series tells the story of Livia Drusilla and the women in Ancient Rome. Express.co.uk spoke to the cast and creators of Domina to find out more about her.

Domina on Sky will take a different look at Ancient Rome and this time will be told from the perspective of women.

The series follows the life of Livia Drusilla and her journey to becoming one of the most powerful women in the world.

Livia Drusilla, also known as Julia Augusta, was a real person, born on January 30, 58 BC.

She married her cousin Tiberius Claudius Nero and their son, Tiberius, would go onto be the future Emperor of Rome. 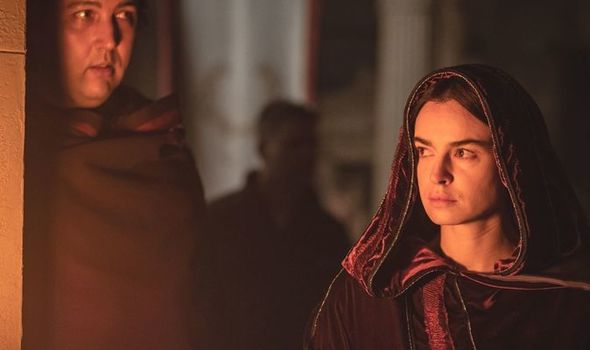 When Drusilla was pregnant with her second son, Gaius Julius Caesar – later the emperor Caesar Augustus- arranged for Drusilla to divorce her first husband Nero and marry him.

They stayed together for 51 years and she effectively ruled alongside him.

Drusilla is suspected of killing her husband his nephew Marcellus and following their deaths, she inherited a large share of Ceasar’s property.

Drusilla was determined to secure power for her son Tiberius and avenge her father, Marcus Livius Drusus Claudianus (played by Liam Cunningham).

The majority of the show’s characters, including Drusilla, were real people and important historical figures in Ancient Rome.

Speaking to Express.co.uk and other press, Kasia Smutniak who plays the older version of Drusilla said: “She was so clever. She was so amazing and she was in a way the first feminist. Her whole life she fought for rights for women, for herself, for her family.

“She used power in order to survive. Not in terms to use power for herself, but the power to survive and that is different.”

Nadia Parkes, who plays the younger version of Drusilla said: “The most interesting thing that I found out [about Drusilla] was she progressed so much of what we understand as feminism now and the female empowerment movement.”

She added: “And then it took thousands of years for women to get back to the point Livia had already taken too [following her death].”

The series is also rooted in historical accuracy, with some creative licence to bring the facts to life.

Creator Simon Burke explained: “We were very authentic and very accurate because Sky Italia really wanted something that was based on fact.

“If nothing is known at all about them, then fine – we can invent as much as we want.

Parkes added: “To my shock, it is really really accurate and there isn’t honestly that much creative licence involved.”

Domina premieres Friday, May 14 on Sky Atlantic and NOW TV