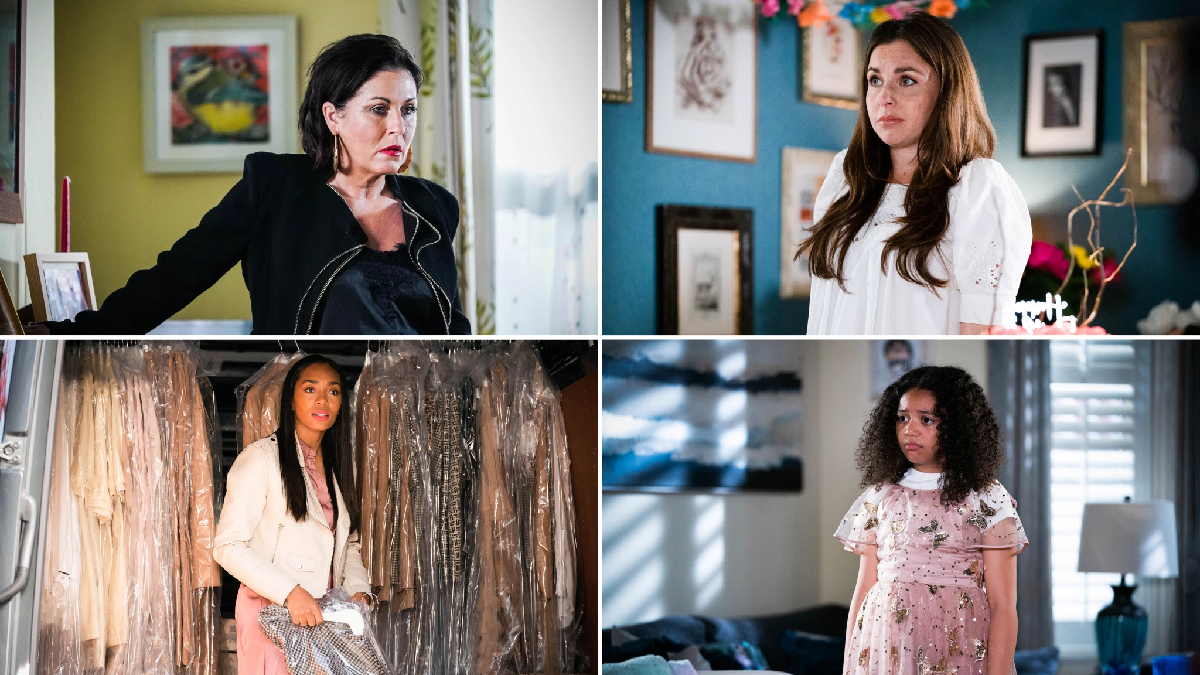 The Carter family are about to be thrown into more disarray in EastEnders as a romance secret is held but what will Mick’s (Danny Dyer) interference lead to?

Meanwhile, Chelsea Fox (Zaraah Abrahams) is testing the water with an uncomfortable Gray Atkins (Toby Alexander-Smith) but when some murder evidence comes to light, is the game up for Gray?

Mick realises that either Frankie or Nancy has a secret boyfriend and demands to know which of them is sneaking around. Later, Mick storms into the gym and demands that Zack ends things with his daughter.

Zack confides in Sharon about how he was involved in Nancy’s hit and run. He then decides to break things off with Nancy, who blames Mick for his decision.

Vi comments that Bernie – who has been taking more diet pills – looks ill when she sees her. Later, Karen invites everyone over to lunch in order to resolve the family’s differences. Bernie feels guilty about the diet pills when Keegan reveals that he told Karen about the surrogacy because he was worried about her.

Jean accompanies Ruby to the hospital for her operation when Martin has to take Lily to the dentist.

When they return home from the hospital, Ruby offers Jean some money to help out. Jean turns her down, but takes Ruby back to her place so they can enjoy some face masks.

Ruby is pleased with how things go and explains how she never had fun like this with her own mum. However, things take a turn when Jean receives a call.

Karen thinks Chelsea should be making more of an effort with the kids. Gray suggests Chelsea could take them shopping as Mia needs a new dress for her birthday. However, when Chelsea neglects the children, Keegan and Whitney have to step in.

Linda fires Zack from The Vic when she finds out what happened with him and Nancy. Mick decides to play along with Linda’s outrage.

Tiffany rejects Whitney’s help as she remains desperate for cash.

Chelsea persuades Gray to not bother going into work today. They meet Chelsea’s friend, who has a van full of stolen dresses. Gray is concerned but Chelsea tries to talk him round.

Chelsea and Gray have some fun in the back of his car. When Chelsea spots an earring, Gray is worried when he realises it was Tina’s.

Billy applies for a job at Kat’s cab firm. He’s upset when Dana’s father Harvey also presents himself as a possible candidate and lands the position straight away. Kat soon realises that something isn’t right with Billy.

Lola gets upset when Ben makes a comment about Isaac. Lola reaffirms her dedication to Isaac’s recovery, which annoys Sheree.

It’s Martin’s birthday, but he realises that Ruby has forgotten. Ruby is left shaken by a comment that Jay makes about her – and her paranoia only grows further when she overhears Kat talking about her.

Later, Ruby realises her mistake when Jean says that she should be planning a dinner for Martin.

Meanwhile, Kat realises that Billy is sleeping in the car lot cabin. She lets Honey, Phil and Lola know what’s going on – and has an idea over how to help.

Elsewhere, Keegan offers Tiffany some money to buy a new dress for her graduation party. Later, Whitney tries to make Tiffany feel better after a comment on her social media page, but she inadvertently makes Tiffany think that she needs to have more work done.