Ellen DeGeneres struggled to contain her emotions as she addressed the audience in the final episode of The Ellen Show.

The long-running series, which began in 2003, came to an end today with a star-studded guestlist on hand to help the 64-year-old say her goodbyes – including Jennifer Aniston.

The last instalment aired on NBC this afternoon, and saw the presenter become emotional as she began a monologue about her history on the famous set.

‘I walked out here 19 years ago, and I said this is the start of a relationship. And today is not the end of a relationship, it’s more of a little break. You can see other talk shows now. I may see another audience once in a while,’ she began to laughs from the audience.

’20 years ago, when we were trying to sell the show, no one thought that this would work. Not because it was a different kind of show, but because I was different.

‘Very few stations wanted to buy the show, and here we are 20 years later, celebrating this amazing journey together.’ 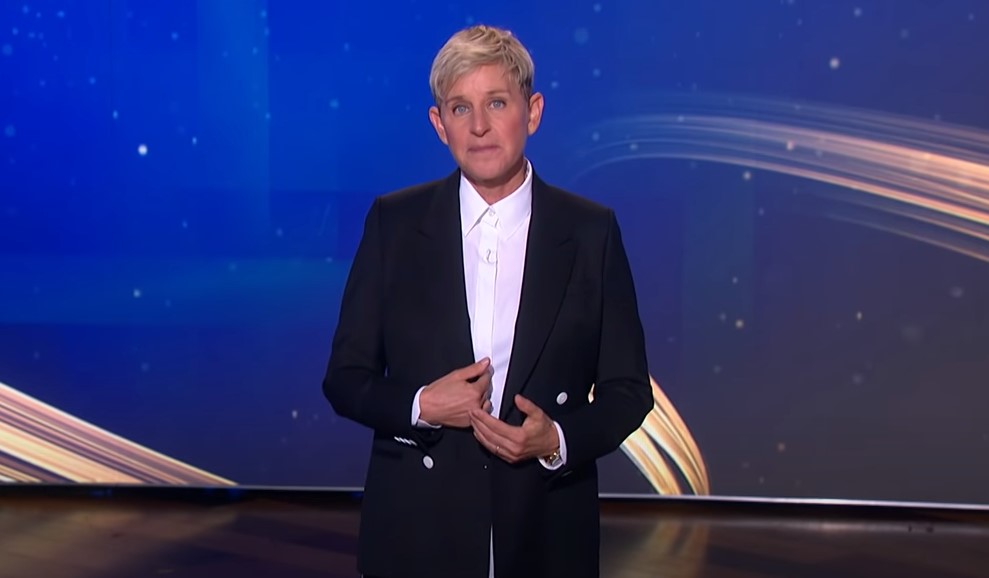 Ellen then spoke of the changes that have occurred since she’s been on air, explaining that she was unable to say the word ‘gay’ when the series first kicked off, almost two decades ago.

‘When we started this show, I couldn’t say “gay” on the show. I was not allowed to say “gay”,’ she continued.

‘I said it at home a lot. “What are we having for gay breakfast?” Or “pass the gay salt. “Has anyone seen the gay remote?” – things like that.

‘I couldn’t say we because that implied that I was with someone. Sure couldn’t say wife. That’s because it wasn’t legal for gay people to get married. And now I say wife all the time.

‘25 years ago, they canceled my sitcom because they didn’t want a lesbian to be in primetime once a week. So I said, “Okay, I’ll be in daytime every day, how about that?”’

‘What a beautiful, beautiful journey we have been on together and if this show has made you smile, if it has lifted you up when you’re in a period of some type of pain, some type of sadness, anything that you’re going through, then I have done my job,’ she added, before her voice cracked.

‘Because of this platform, we have been able to change people’s lives, and this show has forever changed my life.

‘It is the greatest experience I have ever had, beyond my wildest imagination So tWitch, one last time, dance with me.’

At this point, Ellen danced through the audience to Best Of My Love and embraced members of the crowd.

The program first debuted in the early 00s and has been a staple of the TV guide ever since.

A string of famous faces have appeared on the sofa opposite the host, with Kim Kardashian, Michelle Obama, Mariah Carey, Dakota Johnson and Channing Tatum among them.

In July 2020, the hugely popular series was hit with intense backlash as former employees voiced that the set was filled with racism, fear, and intimidation – leading to intense scrutiny.

The following year, Ellen announced that her eponymous series would be coming to an end in 2022, but vowed the allegations were not the reason that she was leaving her post.