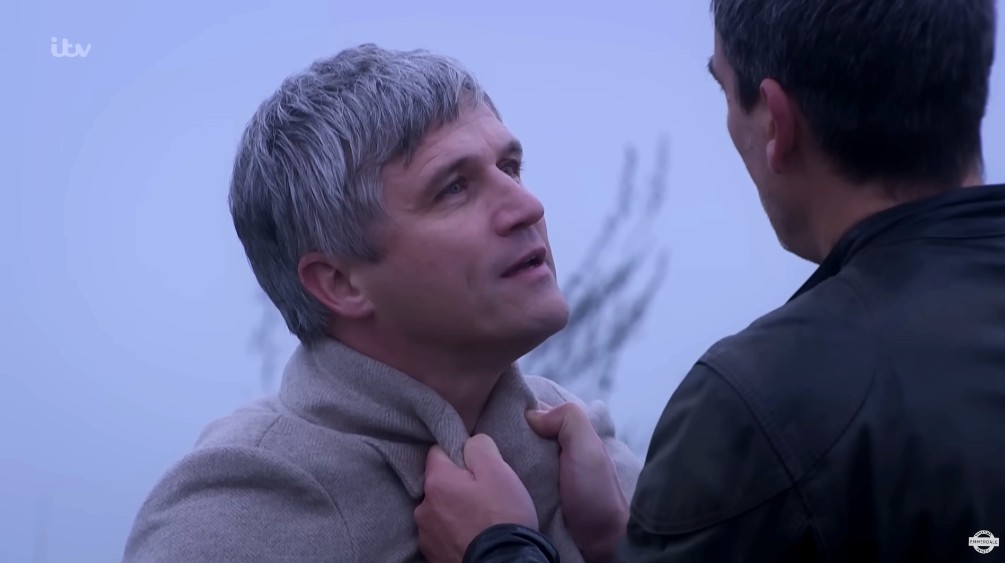 Caleb Milligan (William Ash) has made quite the impact ever since his arrival to the Emmerdale village.

Brother to Cain (Jeff Hordley) and Chas (Lucy Pargeter), Caleb headed to the Dales over the festive period, when he got word of his brother being in prison and eventually, discovered Cain was behind bars covering for Kyle (Huey Quinn), who killed Al Chapman (Michael Wildman).

Getting his foot in the door at Butlers, Caleb was able to convince Moira (Natalie J Robb) and Amy (Natalie Ann Jameson) that getting Kyle to confess to his crime and have Cain released would be the best thing for everybody.

This caused Cain’s anger to grow. He was furious at the way Caleb had already established a role in the family and when he eventually returned home, threatened to kill him on more than one occasion.

During Friday’s instalment of the ITV soap, Cain was wound up even more by his brother, who wanted to ‘talk’ – which is never a good thing in a soap.

On a country path, Cain was left feeling foolish when he thought Caleb wanted to fight with his fists.

The closing scenes of the episode saw Caleb threaten Cain, telling him that he’s more likely to get away with a crime because of his clean record.

Caleb’s ability to stand up to Cain certainly got a lot of fans curious and now, many are wondering if he’s hiding a secret…possibly working as an undercover cop?

‘How has literally no one thought to question how Caleb has such easy access to these lawyers? Either he’s a cop or they’ve totally helped him out before’, one fan theorised on Twitter.

Another agreeing with the theory said: ‘Anyone else think Caleb is not really a Dingle and is an undercover cop?’.

Anyone else think Caleb is not really a Dingle and is an undercover cop?

How the hell has literally no one actually thought to question how Caleb even has such easy access to these lawyers before? Either he’s a Cop or they’ve totally helped him outta before. It’ll all come out eventually & he’ll lose the one thing he wants most – Family #Emmerdale â¤ï¸

Away from the police theory, some are convinced he may end up being revealed as Chloe Harris’ (Jessie Elland) dad.

‘I think Caleb is Chloe’s dad!’, one person said.

I think Caleb is Chloeâs dad

True.. Chloe is vulnerable due to her age. A victim of horrendous stalking too. Kerry left, Amy threw her out. Mack bullies her about the pregnancy. Where is her bad man father though?! ð¤ I was half expecting him to be Caleb!! ð #emmerdale

I canât wait to find out more about Caleb, William ash is amazing isnât he. #Emmerdale

Another summed up Caleb’s time in the show so far by writing: ‘I can’t wait to find out more about Caleb, William Ash is amazing’.

While the connection to Chloe is a strong idea, it may not end up being true, as we know her biological father is called Tony, while her adoptive father – the evil gangster in prison – is called Damon.