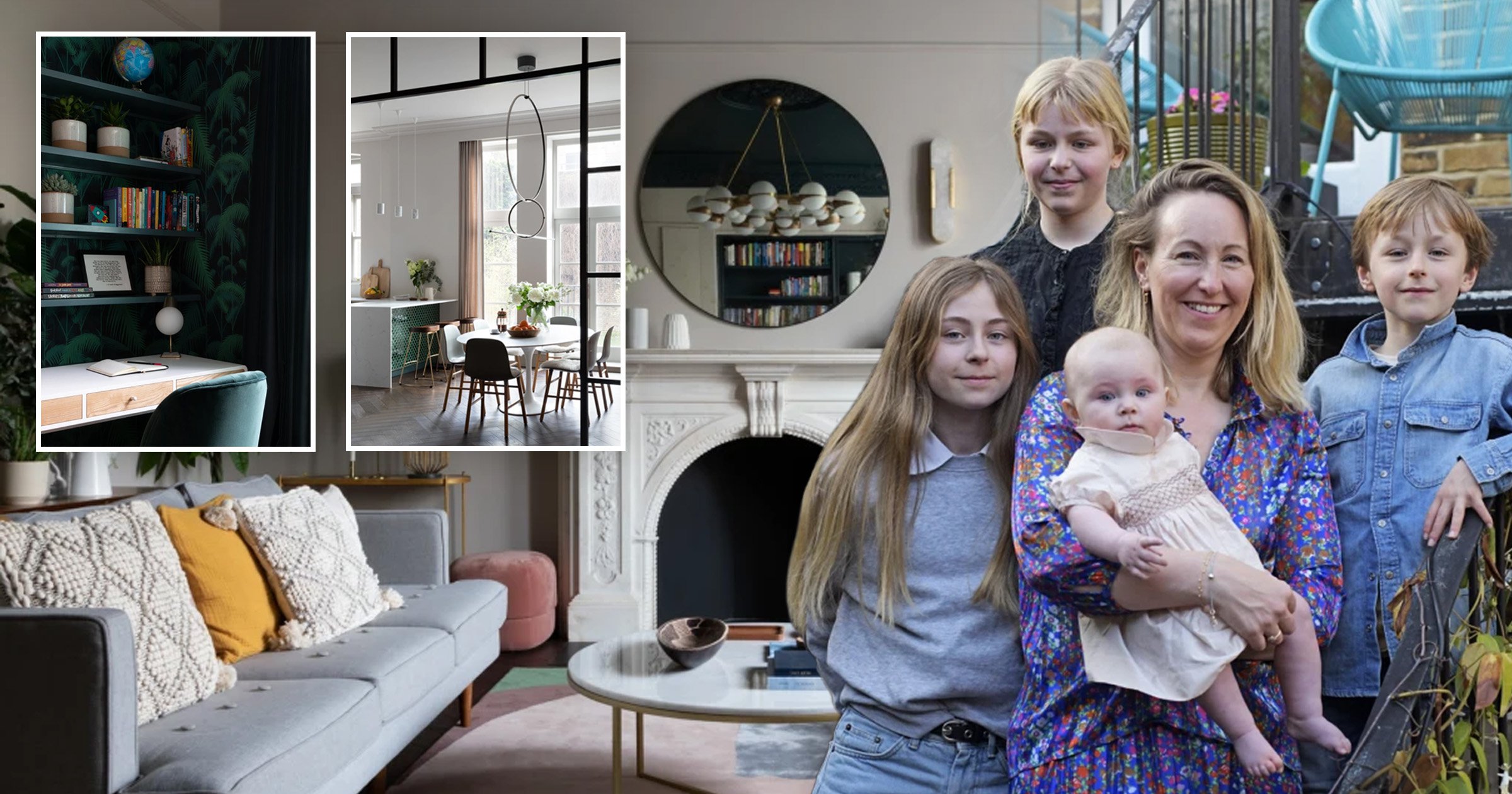 While the coronavirus pandemic has been driving Londoners out of the capital in search of green space – Londoners were said to have purchased more than 112,000 homes outside the city last year – one couple has forsaken a house and garden in return for true urban living.

Virginie Charles-Dear and James Dear had been sharing an Edwardian home in leafy Barnes with their children and a dog called Bear.

But the school run was into London and, sick of sitting in traffic, the couple decided to move into an apartment in central London’s Kensington.

‘Originally we didn’t make the decision [to buy] straight away and decided to rent for the first year – we didn’t know how we would feel about being in a flat rather than a house,’ explains Virginie.

The flat in question had only been recently developed and had hardly any storage space to make it look as big as possible – there wasn’t even a place for a towel in the bathroom.

It did, however, have a garden and is arranged over two floors.

Designed for a certain rental market it was as beige as Alan Partridge’s driving gloves, too, and the garden was completely overgrown. Although blessed with exceptionally high ceilings, the property had been carved up into a series of small spaces.

There was potential, though and, settling in to Kensington life, the couple made an offer to buy the property and it was accepted.

‘Beige carpet, beige kitchen, very, very boring. We had been traumatised by the beige,’ laughs Virginie, standing in her beautiful early Victorian twin-level apartment, which is now an ode to minimalism and Scandinavian design. ‘We saw through it, though.’

The couple divide their time between London and France and are both founders and directors of their own companies – Virginie’s is Toucan Box, James’ Iwoca.
To design the four-bed and four-bathroom apartment they brought in design studio Frank & Faber.

‘[The property] was very soulless,’ says Virginie. ‘I had worked with Frank & Faber on other projects, offices of mine and my husband’s. The idea was to restructure the flat.

‘The brief was to make it liveable for a family of six and a dog. The materials had to be nice and durable and we wanted colour – no beige in the house.’

Once work started it was deemed a good idea to re-do everything. That turned into breaking down a lot of walls.

The kitchen was very small with two doors leading onto it, so this was opened up, as well as creating an open-plan space on the upper ground floor out of a series of smallish rooms.

Smallish rooms on the upper-ground floor were made open-plan. The Crittal-style doors were custom made and replaced a small entrance door, allowing light to flood through.

Period details that had been removed, including stunning coving and the fireplace, were reinstated and restored to bring the bones of the property back to its former glory, riffing off the contemporary approach to fixtures and fittings.

Full-height, bespoke storage was designed for every room without compromising the footprint or aesthetic.

A natural, warm palette of timber, marble and brass combines with bold accents. Farrow & Ball’s Red Earth was used on the joinery in the kitchen, alongside the rich green, blue shade on the kitchen units. Ceilings were painted a rich dark or mustard shade.

‘Our brief was to create a space that was in keeping with the heritage of the property but suited the family’s informal lifestyle and more contemporary taste,’ explains Sarah Ellison, founder of Frank & Faber.

‘A key priority was to introduce a sense of fun and colour into the home – it’s not often we are challenged with designing an entire floor around a pool table.’

In the living room is bespoke joinery designed by Frank & Faber and made by Builders By Design with a special sliding panel to conceal the WC.

The pendant light is from Pure White Lines and the antique-looking wall lights are from the Kelly Wearstler Collection for Visual Comfort.

The kitchen and dining room also feature bespoke joinery and the kitchen itself was designed by Frank & Faber and created by Builders By Design.

It is carefully considered so that everything – from pots and pans to appliances – is hidden away for maximum decluttering.

Again the walls are Farrow & Ball Ammonite and the kitchen is painted in Little Greene Harley Green. Just to prove this is a space made for living, the pool table sits in the living/dining room, with a stylish pendant light from Client Supply overhead.

Flurries of house plants soften the spaces, with organic colours and materials enriching the neutrals.

Unique flourishes such as the green tiles under the breakfast bar add further richness without taking over the space.

‘I love the textures. I love the colours. From the deep green of the tiles under the bar to the wooden cabinets, everything has a very warm feeling,’ says Virginie.
Compared to the pared-down approach to the rest of the property, the upstairs guest toilet has been allowed to run free.

‘It’s the one room where you can go crazy,’ smiles Virginie.

‘I really like it, it’s really dark. In dark places don’t try to make them light, just embrace the darkness.’

Here the wallpaper is Lioness & Palms, a design by C.F.A. Voysey, from a watercolour done in 1918 and found in the archives of the Victoria & Albert Museum, London.

Having finished the property, Virginie says that the couple are sure that their move further into London was the right one – and they have no plans to go anywhere else.

‘It needed to be practical, but [with a family] too minimalist is impossible. We managed to get that balance just right. We are settled now and have changed so much that it truly reflects our taste and how we live – it would be very difficult to move somewhere else.’