The Bill Clinton/Monica Lewinsky saga reached its conclusion in Tuesday’s finale of Impeachment: American Crime Story — but no one really got a happy ending. 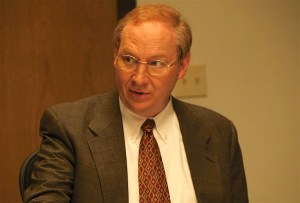 It’s September 1998, and Monica lands a book deal with the author who co-wrote Princess Diana’s tell-all. (She needs the money, since she still has a lot of legal bills to pay.) Kenneth Starr’s staff scrambles to get the final report ready, and suddenly, it’s being released, with boxes of the report dropped on the steps of Congress. It’s also released online at the same time, and people everywhere are dialing up to read all the lurid sexual details of Bill and Monica’s affair. Ann Coulter can’t believe the cigar story (“Am I high? Am I on LSD?”), but when she flips ahead to the “Grounds for Impeachment” chapter, she just finds more sex stories.

Bill Clinton’s advisers tell him there’s not enough in there to impeach him, but Republicans are moving ahead with a vote anyway. Linda Tripp learns that she’ll be indicted for illegally taping her conversations with Monica, since she only has federal immunity, not state. (Prosecuting her is “a very popular idea,” her lawyer informs her.) Plus, Paula Jones is reduced to doing commercials for the Psychic Friends Network — she just gets prank calls — and Monica hides out while hearing things on TV like: “Can you imagine your son coming home and saying, ‘I’m going to marry Monica Lewinsky’?” So yeah, no one’s really living their best life at this point.

A staffer digs into the FBI archives and finds Juanita Broaddrick’s claim that Bill Clinton raped her. The media starts to swarm around her, and she agrees to an interview with Dateline. The impeachment vote is leaning towards “yes” in the House, and Bill Clinton wants to drum up support, but he can’t. Hillary could, though: She’s more popular than ever, and even gets an offer to run for Senate in New York. Paula stoops to doing a photo shoot for Penthouse — she was assured it’ll be “real tasteful” — and we see her posing fully nude while Hillary sits for a more refined photo shoot of her own. 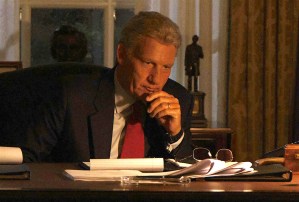 Bill is losing patience: The impeachment vote is going against him, now that Juanita Broaddrick’s accusation of rape is public. “She’s f–king lying,” he fumes, but the damage is done. The House votes to impeach, with the vote for conviction moving to the Senate. Linda tracks down her book editor Lucianne at an event, but now with Monica’s book coming out and the Starr Report revealing everything, interest in Linda’s book has dried up. Plus, she gets heckled by strangers everywhere she goes. Matt Drudge interviews Coulter on Fox News, and he thinks this all marks “the dawn of a new conservative era” — but she’s annoyed that Bill and Hillary are polling higher than ever, even after all of this.

Monica gets called in for more questioning, but she’s been through this enough by now and answers their questions with a chilling efficiency. On her way out, Bill’s lawyers stop her and offer a tepid apology on his behalf — which only irritates her more. It looks certain that the Senate will acquit the President, though. Linda’s daughter can’t believe it, and Linda tells her about her own father, who ditched his family and had a ton of affairs. Men like her dad and Bill Clinton, “they ruin lives, and they get away with it,” she warns. And to underline that point, Juanita Broaddrick goes on Dateline and tells a harrowing tale of Bill Clinton forcing himself on her — but by then, everyone is sick of this story and would rather watch the Grammys.

After finally moving to New York, Monica gets ready for a big public signing of her new book. Also in town is Linda, who has lunch with a writer for George magazine — and he doesn’t recognize her, since she’s had extensive plastic surgery. Linda wants a chance to tell her side of the story for once, but when he asks her if she’d ever reach out to Monica, she says, “I don’t think that would be welcome.” At the signing, Monica is greeted by a standing ovation from adoring fans, but she has to take a moment and collect herself when the screams and camera flashes become too much. Linda says she hopes Monica will realize one day that this is all Bill Clinton’s fault: “I just wish she could see that I saved her.” And back at the signing, Monica catches her breath and tells her handlers she’s going to be OK.

Alright, time to cast your vote: Give the Impeachment finale — and the whole season — a grade in our polls, and hit the comments to share your thoughts.