For the second time in their relationship, Sumit Singh has canceled the ring ceremony that was supposed to happen between him and Jenny Slatten.

The first step toward marriage, Sumit keeps postponing his promise to Jenny.

Jenny has stood by Sumit through court cases and criminal charges, but if they don’t get married soon, she’ll be forced to return to the US during a global pandemic.

With India closing its borders due to the coronavirus, she worried that if she left the country, she wouldn’t be able to re-enter to be with Sumit.

Her time in India is limited

Jenny has left her life and family in Palm Springs multiple times to marry the man she loves in India.

Each time she enters on a visitor’s visa, she has 180 days before she’s forced to leave the country. The only way Jenny could stay longer would be if she gets married within that time period.

However, Sumit’s parents have committed to doing whatever they can to block their marriage, including threaten legal action against him. Sumit is thousands of dollars indebted to his parents, as his father helped him settle his divorce with his ex-wife.

While the relationship has been tested in the past by his ex-wife and his parents, Jenny and Sumit face a new opponent: COVID-19.

Due to the stay at home order, courtrooms are closed and marriage licenses aren’t being issued. Without getting married to Sumit, all she can hope for is a miracle that her visa is extended.

Is Jenny still in India? 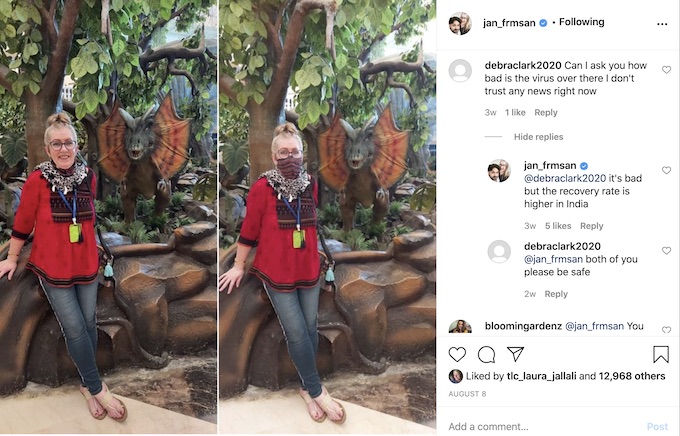 With two episodes left in the season, how will the story between Jenny and Sumit end?

Due to contractual obligations,  the couple can’t give too many hints, but little droplets of information do leak through.

One user commented on her Instagram and asked, “Can I ask you how bad the virus is over there?”

Implying that she was still overseas, Jenny responded, “It’s bad but the recovery rate is higher in India.”

The comment was posted in late October, so it’s possible that Jenny is currently with Sumit in his country.

Is she married? That is still unknown at this time. The show was filmed earlier in the year and it’s possible she could’ve returned to the US to reset her visa time clock.

Do you think the 90 Day Fiance couple tied the knot in India?