James Martin was back on ITV with a longer edition of his Saturday Morning cookery show. In the kitchen today, he was joined by chef Tony Tobin and Romy Gill who were cooking up a storm, as well as celebrity guest – A Place In The Sun presenter – Laura Hamilton who was on hand to try his tasty dishes. Alongside that, a series of pre-recorded VT’s were shown from James’ travels, one of them being in Ireland. And during his step-by-step cooking demonstration, the chef ended up injuring himself after warning those at home to be careful.

“Now, one word of warning, when you’re frying up oatmeal in a pan, with bacon fat, do not go and stick your fingers in there,” James explained.

“Do not be tempted to go and have a little mouthful of this.

Those watching at home then saw him use a teaspoon and his fingers to arrange the oatmeal on top of the bacon. 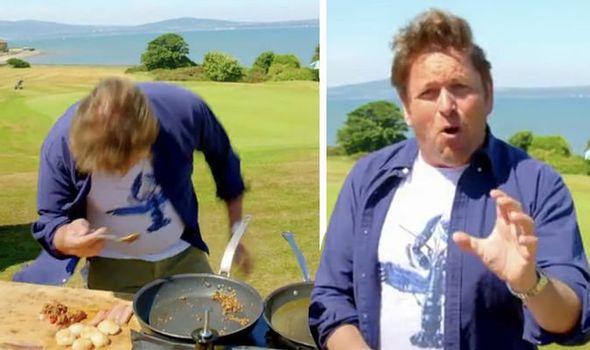 “You can take this and put this on top of your bacon,” he continued.

“You’ve got all the flavours of the apple, the cider, the spices – all of which work really well with the bacon.

“But the crunchiness of the oatmeal.”

James then licked his fingers, not realising the temperature of the oatmeal and cried out: “Ow!” 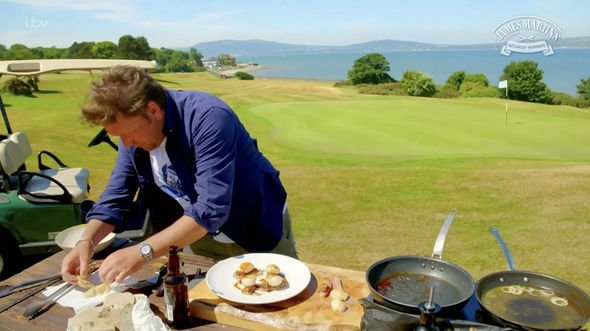 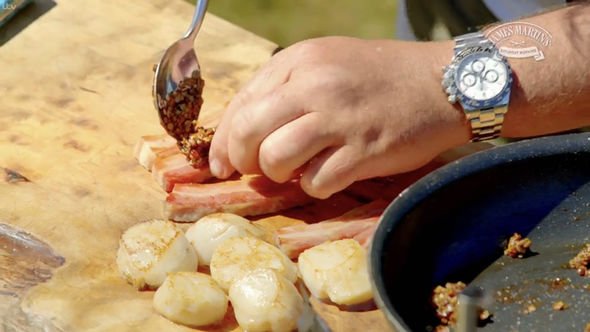 “It’d be cooler to put your hand in that deep fat fryer – trust me!” He joked.

Following the incident, he then created the dish’s final element: “Bit of that, and then finally, I’m going to make a little sauce.

“Now I know what you’re thinking, this is a bit poncy for me – but sometimes I do do poncy food, it’s going to get worse before it gets better.

“Now watch. This is a little bit of stock – beef stock, chicken stock – you can buy whatever you want really,” the chef added. 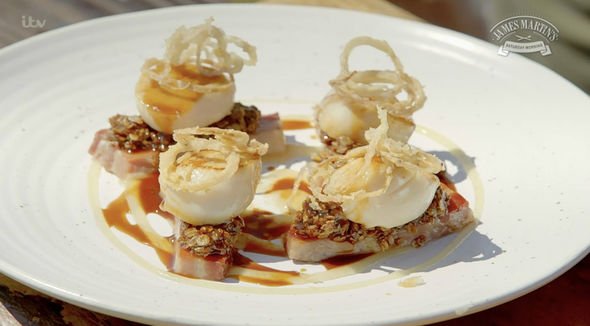 “And then we can simply plate it up.”

But instead of James’ usually simple plate arrangements, he decided to go a bit extra.

“Because we’re surrounded by amazing restaurant now in Northern Ireland, I’m going to get a piping bag and we’re using this combination – this is apple and cider – our Bramley apples.”

Viewers saw him pip blobs on the plate, before adding the scallops and bacon topped with oatmeal.

Also on the show, James was showing a viewer how to make a peppercorn sauce to accompany a steak after they asked for his expertise.

He also created flatbread with sardines for Laura as a homage to some of the places she has visited with A Place In The Sun over the years.

James Martin’s Saturday Morning airs next Saturday at 9.30am.